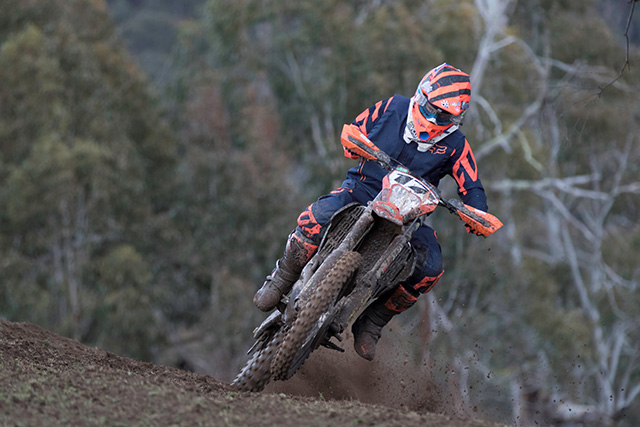 KTM‰Ûªs dealer-backed riders were in the thick of the action as the 2017 Australian Off-Road Championships reached their climax at Omeo last weekend, few more dramatically than hard-charging Peter Stevens KTM rider Jack Simpson.

Last year in his rookie season, Simpson won the class with eight wins and a round to spare, but this time round the trail has held more than its fair share of ups and downs, culminating in a serious injury when it seemed he was on the verge of an eye-opening open-class debut in the Finke Desert Race.

Simpson‰Ûªs recovery from a broken rib and a punctured lung has been lengthy, with the Victorian still encountering plenty of pain in the area ‰ÛÒ but it wasn‰Ûªt enough to prevent him attempting to salvage a podium finish in the E1 class.

After finishing second to Wil Ruprecht and ahead of Scott Keegan on the Saturday, Simpson clicked up a gear on Sunday, and throttled his KTM 250 EXC-F to a resounding 45-second class victory over Keegan and Brad Hardaker.

The performance was enough to edge Hardaker out of third in the E1 category by just two points.

‰ÛÏI was battling the flu all weekend, and I didn‰Ûªt really have much sting," Simpson explained. "I got a mid-pack start in the Saturday cross country, and had a couple of little crashes and then worked my way through to fourth. I had one little fall which gave Wil Ruprecht a bit of a sniff and got around me so I ended fifth for the race and second in class.

"Sunday I was sixth outright and first in class by a minute, but I still felt terrible. I had no energy, couldn‰Ûªt get any food down, but I had a solid five sprints, made no mistakes and was good enough for that.

"I‰Ûªm still only about 80%, realistically. I can‰Ûªt run, can‰Ûªt stress my core or my ribs and that spot under my armpit still hurts. I didn‰Ûªt think a punctured lung would still be giving me grief after three months. I came back early to try and secure a podium position in the championship, so I‰Ûªm glad that was successful. I would have sat back a bit longer otherwise.‰Û