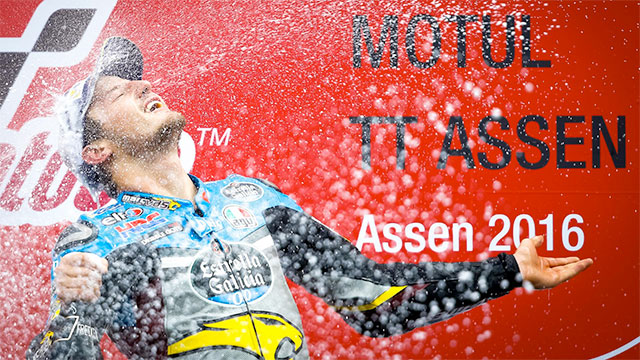 The 250th race of the modern MotoGP era will be one that Team Estrella Galicia 0,0 Marc VDS and Jack Miller will never forget, after the Australian claimed a remarkable maiden premier class victory at the historic Assen track.

Miller overcame perilously tricky conditions on a weather-dominated afternoon at the Dutch TT to become the first non-factory rider in 10 years to win in MotoGP.

He also became the first Australian to win a MotoGP race since Casey Stoner in 2012 after a day of high drama and tension in front of a sell-out crowd of 105,000 fans in Holland.

Scheduled to be a 26-lap race that started on a wet track, Miller had expertly mastered the tricky track conditions to charge from 19th into eighth when the action was halted on safety grounds on lap 15 as monsoon conditions enveloped the 4.5km Assen venue. 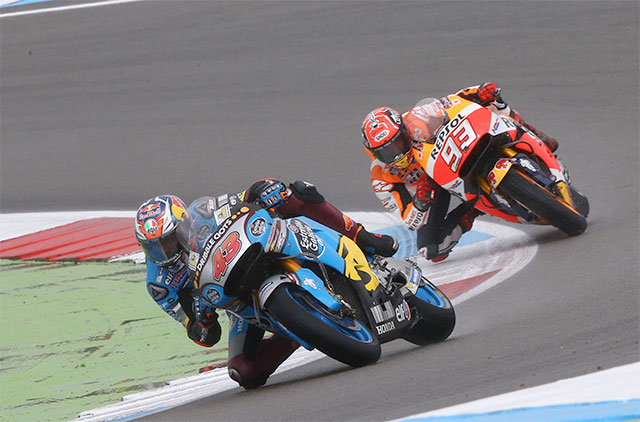 Jack Miller held off Marc Marquez to take his first MotoGP win and the first for a privateer.
Once conditions had improved and standing water was cleared from the track, the race was restarted over a shortened distance of 12-laps, with the grid forming based on positions from part one.

Conditions were no less hazardous in part two, but as experienced riders crashed out of contention, Miller rode a majestically measured and composed race to move into the top three on only the second lap.

A brilliantly executed overtake on Marc MÌÁrquez on lap four then put Miller at the front of the field.

And it was a lead he never looked like relinquishing, as he rode a faultless final eight laps to win by almost two seconds, sparking jubilant celebrations to mark the first MotoGP win by Team Estrella Galicia 0,0 Marc VDS since its premier class collaboration started with Honda in 2015. 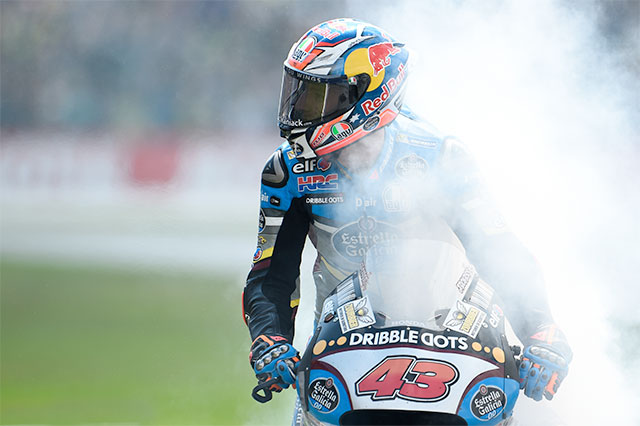 Jack Miller celebrates with a burnout
‰ÛÏI don‰Ûªt often say this but I‰Ûªm lost for words," Miller said. "I feel incredibly emotional right now and it is hard to describe the sensation of winning for the first time in MotoGP. I felt confident and fast in the first part of the race but it was the right call to red flag it because the conditions were getting pretty dangerous. The track was really slippery for part two as well but I immediately felt comfortable.

"I could see a few riders making mistakes but I just kept my focus and concentrated on being fast and consistent without taking any silly risks. Once I passed Marc I just tried to block out the fact that I was heading for my first win and keep a clear mind. Coming out of the final chicane and seeing the chequered flag was just an unbelievable feeling. My family and I have made a lot of sacrifices to make today happen and it feels amazing. I can‰Ûªt thank Team Estrella Galicia 0,0 Marc VDS enough. They have given me incredible support and never stopped believing in me. I must also thank Honda and their management for giving me this opportunity and allowing me to show what I can do at this level. It might take a while to sink in but I am going to enjoy tonight that‰Ûªs for sure!‰Û 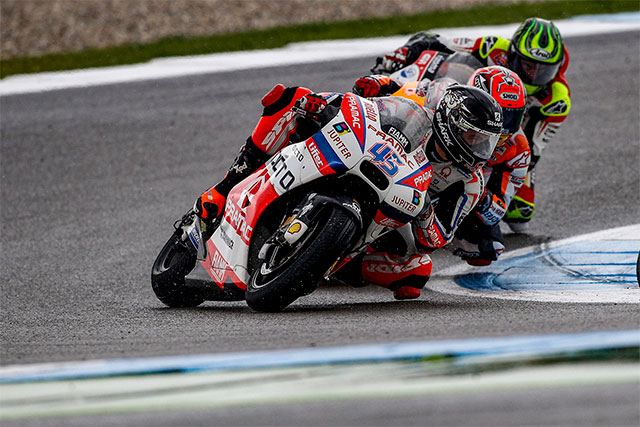 Brit Scott Redding rounded out the podium with third

With the track soaked, the rain eased and riders headed out onto the grid with wets fitted. Conditions were far from ideal, Eugene Laverty (Aspar Team MotoGP) falling on his sighting lap. The lights went out with riders knowing a flag-to-flag race was likely, Valentino Rossi (Movistar Yamaha MotoGP) grabbing the lead out of the first corner as they tiptoed around the first corners.

Once he had the lead Rossi didn‰Ûªt look back, opening up almost a second advantage on everyone but Andrea Dovizioso (Ducati Team) on the first lap. But soon the wild Yonny Hernandez (Aspar Team MotoGP) was past him with a championship to consider ‰Û÷The Doctor‰Ûª and Dovizioso chose not to risk anything. 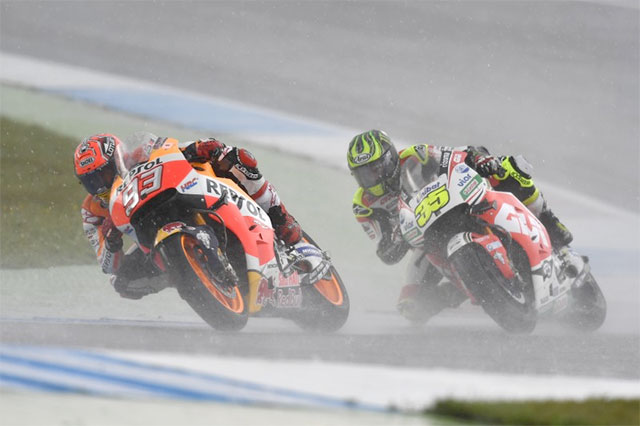 With Rossi out and Lorenzo way down the order Marc Marquez was happy with second and a big points haul over his rivals
Riders looked set to consider a change to intermediate or dry tyres but then the rain returned with a vengeance. Dovizioso was able to catch up to Rossi once again. The rain only got heavier and allowed Scott Redding (Octo Pramac Yakhnich) to join the battle for victory, Yonny Hernandez‰Ûªs fall turning their battle into one for victory. But then with 12 laps to go the rain was ruled to be too severe and the red flag was brought out due to the weather conditions.

Not long after the race was restarted, run over 12 laps. The grid was based on the finishing positions on lap 14 and the quick restart rule made its first appearance in the premier class. As such Dovizioso lined up on pole with Petrucci and Rossi completing the front row. Redding led the Repsol Honda Team pairing of Marc Marquez and Dani Pedrosa on the second row, Jorge Lorenzo (Movistar Yamaha MotoGP) lined up in 19th after a disastrous start in the first 14-lap race.

Andrea Dovizioso, who had led the restart, lost the front end as he attempted to stay with Rossi. He took a heavy roll through the gravel but sustained no serious injuries. This granted Rossi a comfortable lead until he crashed out at Turn 10 a lap later. Disaster for ‰Û÷The Doctor‰Ûª in a race which could have seen him right with Marquez in the championship. 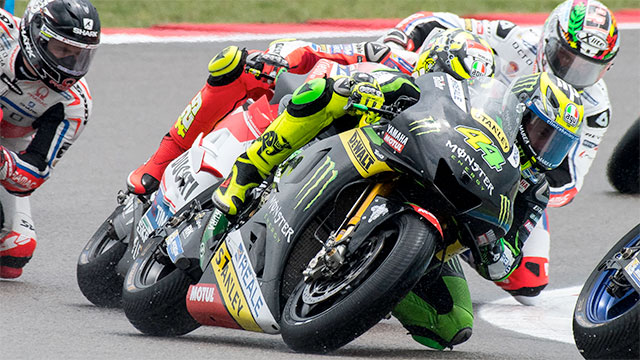 Pol Espargaro came home 4th for his highest finish of the year
Known for his ability in the wet, Jack Miller (Estrella Galicia 0,0 Marc VDS) made steady progress off the line and soon found himself in second behind Marquez. After an injury hit start to the season Miller seized his chance and took the lead of the race at the final chicane on lap four. Marquez tried to close down the Australian but Miller kept his cool. Miller‰Ûªs victory is the first MotoGP win by an Australian since Casey Stoner‰Ûªs final victory in Phillip Island. He also becomes the first rider on a non-factory bike to win a race since Toni Elias won the infamous Portuguese GP in 2006.

Marquez was aggressive off the line, leading into the entry of Turn 1 but dropping back as he ran wide and sliding to third. But the Spaniard soon found himself in first as Dovizioso and Rossi fell. He had an important decision to make when Miller went past him, risk it for victory or settle for 20 points with his main rivals having disastrous weekends? Championship ambition won out and Marquez settled for second place, extending his championship lead over both Lorenzo and Rossi by a significant margin.

‰ÛÏToday‰Ûªs race was one of those in which you can either lose many points or gain them, and you can face it with two mentalities: either you take a risk to gain a bigger advantage, or you focus on finishing the race in order to lose the fewest points possible," Marquez said.

"The latter is the mentality that the team repeated to me about forty times between this morning and today, and it is exactly what I did. I tried to stay in the top five so as not to drop many points to Valentino [Rossi] and attempted to not make mistakes in order to finish the race.

"At the beginning of the first race I didn‰Ûªt feel comfortable and lost touch, but then I was able to recover. I think that stopping the race was a good decision, because it was very dangerous out there. In the second race I started off thinking about pushing a bit more, but everyone was very fast and I decided not to follow Rossi and Dovizioso because they were going too quickly. However, both of them crashed later on. When I saw Jack [Miller] stalking behind me, I knew that he would be going for his first win so I preferred to let him pass and keep a couple of seconds gap between us, as well as a cushion to third place. I did that because with Jorge [Lorenzo] so far back and Rossi out of the race, second place was as good as a victory. In the end, we leave Assen with a bigger lead," the Spaniard concluded. 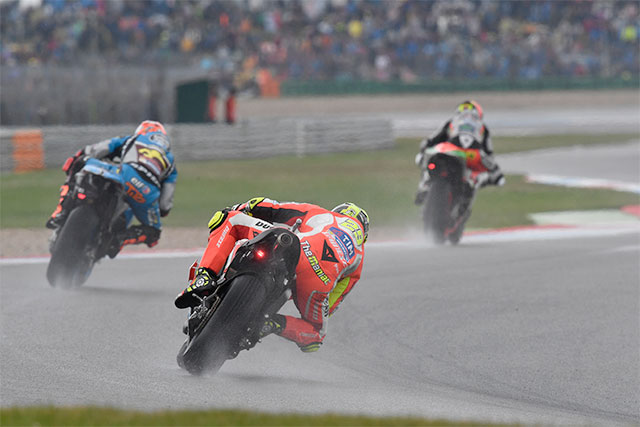 Andrea Iannone took fifth despite starting from last and throwing his Ducati down the road in the first half of the race
The battle for third was one of the closest on track, Pol Espargaro (Monster Yamaha Tech 3) and Redding finding themselves in podium contention due to the falls ahead. Espargaro could smell his first podium but Redding had a point to prove. Redding muscled his way past his former Moto2 rival to return to the podium for the first time since Misano in 2015.

"It is a great satisfaction. It was a very difficult race," Redding said. "In a few moments, before the red flag, I could not see hardly anything. I drove by instinct and I managed to stay upright. The feeling with the bike was great and it was so even in the second half of the race. I am very happy for having given this satisfaction to the boys who have done an extraordinary job. We had so much bad luck so far and this weekend with the first row on the grid and the podium is a reward for having always continued to believe in what we were doing." 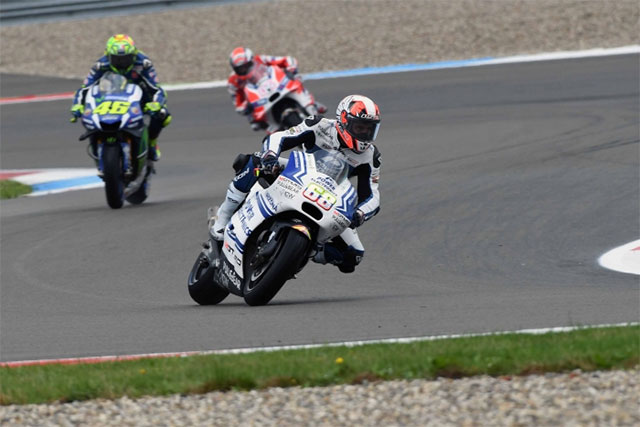 Yonny Hernandez led the GP at one stage and looked dominant but sadly, like many others, crashed out.
Tito Rabat (Estrella Galicia 0,0 Marc VDS), Dani Pedrosa (Repsol Honda Team) and Bradley Smith all finished the race, everyone who remained upright scoring points.

The wet gave Yonny Hernandez (Aspar Team MotoGP) the perfect chance to show his skill with nothing to lose the Colombian took the lead of the race on the third lap. He‰Ûªd extend his lead out the front until he fell on lap 12 his dreams of a miraculous first win gone as he retired before the red flag.

Dani Pedrosa‰Ûªs weekend went from bad to worse as he crashed at Turn 9 on lap one of the restart. Cal Crutchlow (LCR Honda) followed soon after at Turn 12.

What had been a dream Sunday for Petrucci ended in disaster as the Italian‰Ûªs Ducati died on the second lap, his hopes of a Silverstone repeat over.