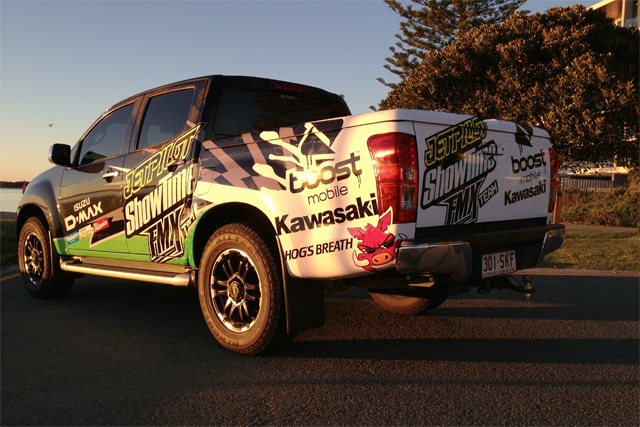 Isuzu UTE has been announced as the Official Vehicle Sponsor for the 2013 Sydney Motorcycle & Scooter show, 15/17th November 2013.

Exhibition Manager Mal Jarrett commented is excited to have Isuzu back on board as the official vehicle of the 2013 show.

"We are thrilled to have Isuzu UTE on board again as our Official Vehicle Sponsor." Jarrett stated. "There's an obvious synergy between bike riders and need for Utes, especially for our off road riders."

Isuzu UTE is also associated with the FMX Showtime team and Kawasaki Motorcycles, and was recently awarded a series of coveted 'Ute of the Year' awards both here and overseas.

Isuzu UTE, Assistant General Manager - Marketin g& PR, Dave Harding also is looking forward to having a little big of fun at the Isuzu stand at this years show.

"The Motorcycle & Scooter Show presents us with a great opportunity to showcase our brand to our two-wheeled friends, as many of them are also ute and 4WD owners." Harding explained. "Unlike a motor show, we also get to have a bit more fun on our stand with the boys from ShowTime FMX and the Kawasaki Motocross team - of which we are both a proud sponsor."

The 2013 Sydney Motorcycle & Scooter Show presented by QBE will be held at the Sydney Convention and Exhibition Centre from November 15-17, 2013 and is guaranteed to be the motorcycle industry's biggest and best show this year, with the floor space at capacity already and all major exhibitors locked in.

Top Image: Isuzu UTE will be the Official Vehicle Sponsor of the 2013 Sydney Motorcycle & Scooter Show.