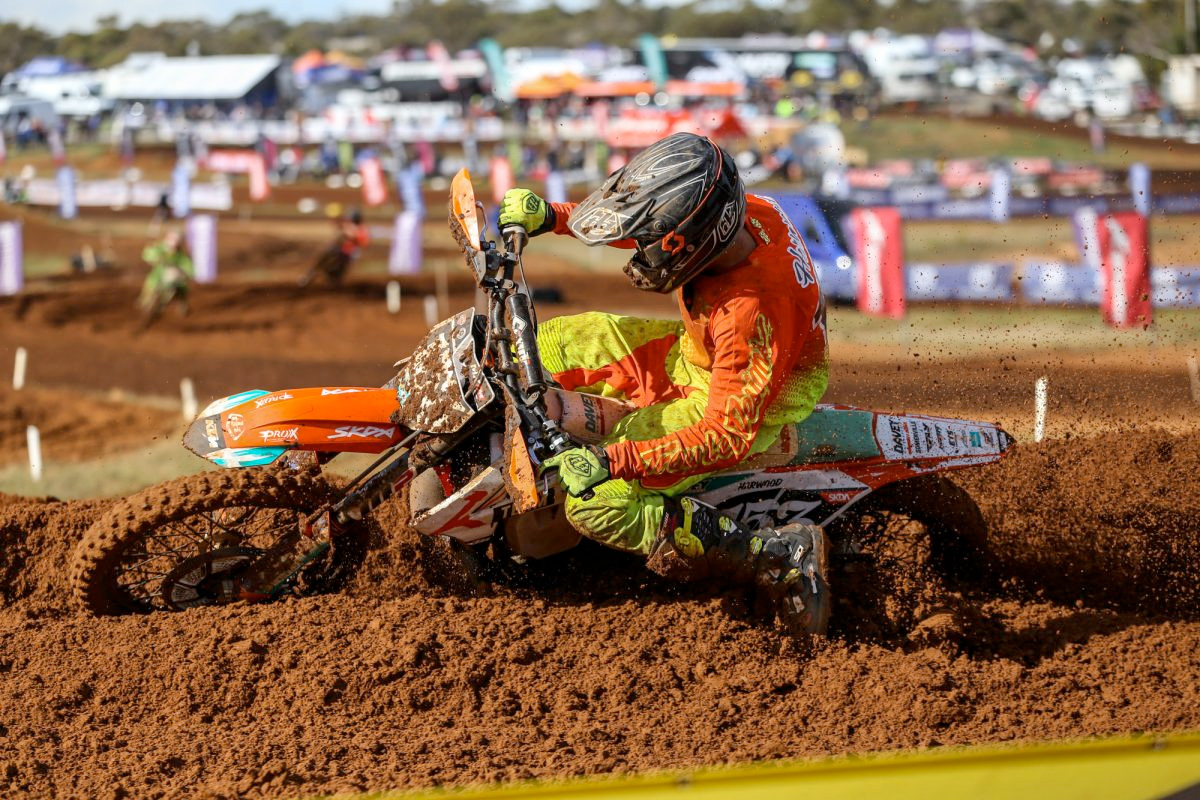 Harwood, who is racing both the MX1 and MX2 classes this season proved that he truly is the MX Nationals Ironman, recording 1,3 race results to conclude the weekend‰Ûªs event with the round win in the MX2 category.

With the five-week mid-season break commencing directly after today‰Ûªs racing, it was a dash for championship points at Murray Bridge today, and all riders in the MX2 category did exactly that across two action filled motos.

Davey Motorsport‰Ûªs Harwood got his round five campaign started in the best way possible this morning, shooting to the top of the time sheets in qualifying, setting a 1:48.907 lap time and securing first pick of the grid. Second fastest on track was Serco Yamaha‰Ûªs Jackson Richardson (1:49.039), followed by KTM two-stroke young gun Egan Mastin (1:49.285). 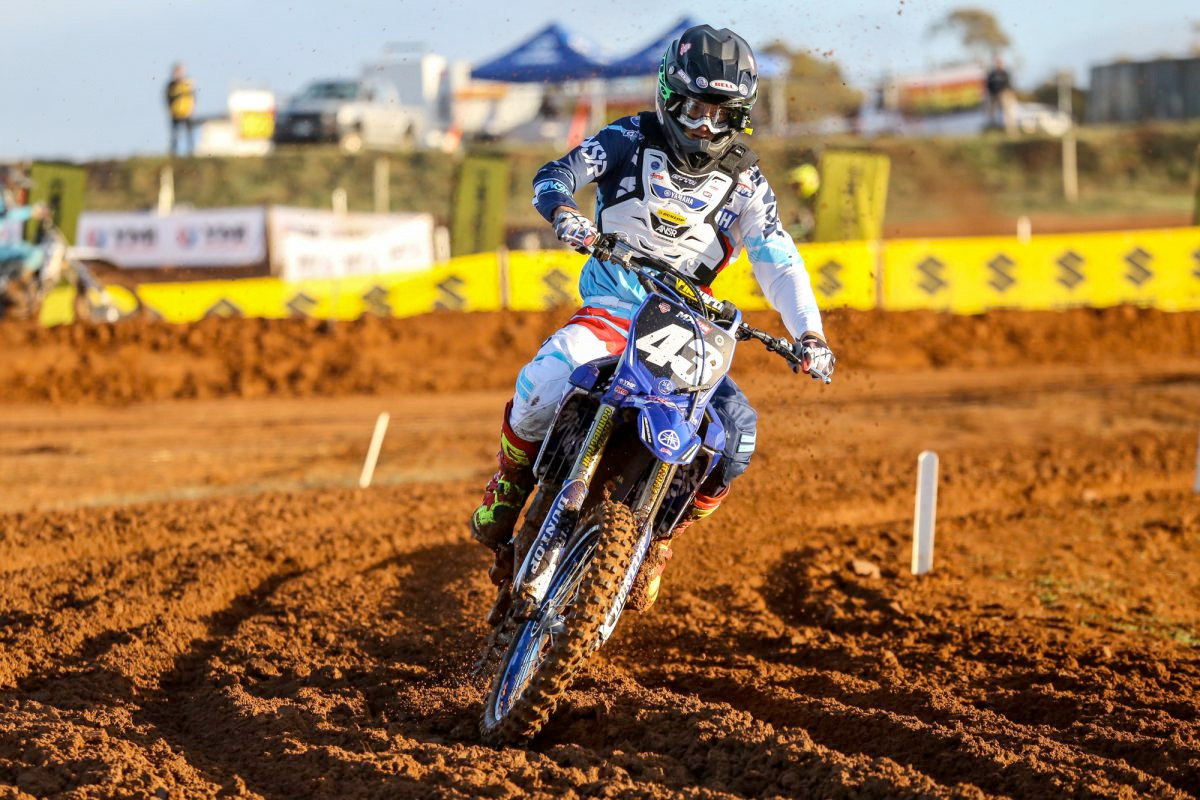 In the first 30-minute moto for the Motul MX2 class, riders were handed a varied surface, favouring those who could adapt to the sandy yet rutty conditions. When gates dropped, it was KSF Racing‰Ûªs Dylan Wills who secured the first Raceline holeshot of the day, while Mastin and Richardson slotted in behind him.

After a lap on track, light rain started to fall on the Murray Bridge circuit giving riders yet another aspect to contend with. But the real test was for Wills who was forced to hold his composure with Mastin closing the gap on the Husqvarna mounted rider.

But Mastin had his own battle to fight off, with Richardson nipping at his heels, and by lap three, the Serco Yamaha rider had made the move into second position where he then began to close in on race leader Wills.

However, Mastin was not prepared to go down without a fight, and only a few turns later had reclaimed second position, setting up a three-way battle for the lead.

Behind the top three was fastest qualifier Harwood, red plate holder Wilson Todd and Penrite Honda CRF Racing Kyle Webster who were also rapidly closing in riders at the front of the field.

By the halfway mark in the moto, Richardson had gotten by Mastin, and began to apply the pressure on Wills for the lead, and once riders had reached the whoop section on the eighth lap, the Serco Yamaha rider made a move on Wills for the top spot that stuck. Unfortunately for Wills, Mastin followed suit relegating the KSF Racing rider to third.

With just over ten minutes left on the clock, Richardson continued to lead from Mastin and Wills, while New Zealander Harwood was just outside the top three in fourth. Todd continued to occupy fifth position followed by brothers Mitchell and Richie Evans.

Unfortunately for Mastin a ten second in-race penalty saw him drop back to seventh with only five minutes remaining, tightening up positions at the front even further. With Mastin out of the equation, Richardson had his hands full once again, with Wills, Harwood, Todd and Webster all tagging onto his rear wheel.

But only moments later, it was a hard charging Harwood made the move on Wills and Richardson for the lead, the New Zealander securing the top spot at a pivotal moment. With Harwood out in front, Wills also managed to get by Richardson with only a few rotations remaining.

As race one for the Motul MX2 category reached it‰Ûªs closing stages, the rain became more of a factor, falling heavily in the final laps, but one rider who had no issue with the moisture was Davey Motorsport‰Ûªs Harwood who continued to lead from Wills and Richardson.

And it was in those positions that they stayed, Harwood collecting his first race win of the season at the conclusion of the moto, followed by Wills and Richardson in second and third places respectively. Fourth was collected by DPH Motorsport‰Ûªs Todd followed by Mastin who‰Ûªs in-race penalty saw him finish in fifth. Webster, Serco Yamaha‰Ûªs Mitchell Evans, Richie Evans, Raceline Pirelli KTM‰Ûªs Rykers and Tomas Ravenhorst completed the top ten in race one.

In what was a drastic alteration of results ‰ÛÒ during the lunch break, Motorcycling Australia‰Ûªs Steward of the event reduced Mastin‰Ûªs in-race penalty to five seconds placing him in third position at the conclusion of moto one. Due to the change, Mastin secured the final podium spot, relegating Richardson to fourth, and Todd to fifth. 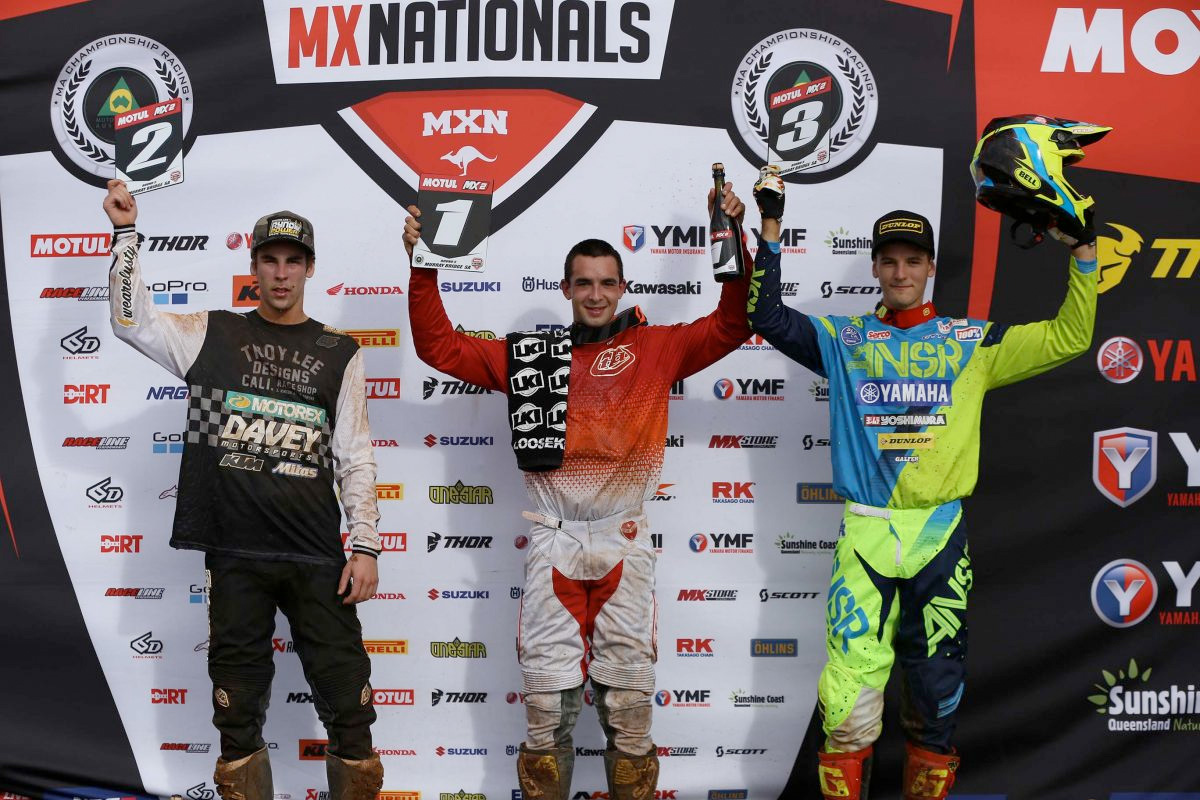 By the time riders lined up for the second and final moto at Murray Bridge, the track had developed deep ruts and square edged bumps providing the MX2 class with one difficult surface for their final appearance of the first half of the season.

When the gates dropped for the second time this afternoon, Serco Yamaha‰Ûªs Evans shot off the grid and collected the second Raceline holeshot of the day, while Mastin and Richie Evans slotted in behind him.

Unfortunately for Richardson, a first turn crash forced the Serco Yamaha rider to re-join the race in dead last position, and a mission and a half if he was to make his way through the field and in to a podium spot.

After three laps, Mastin had closed in Serco Yamaha‰Ûªs Evans, while a distance behind them Richie Evans was locked in to his own battle with Davey Motorsport‰Ûªs Harwood for third.

A notable absentee from the front of the field was DPH Motorsport‰Ûªs Todd, who after five laps was back in eighth, and with a large task ahead of him.

With only 20 minutes on the clock in the final moto for the Motul MX2 class, it was a sprint to the finish line for the 250cc competitors, and by the half way point in the moto, Evans continued to lead from Mastin in second. Harwood had made his way into third followed by Richie Evans and KSF Racing‰Ûªs Wills in fourth and fifth.

As moto two reached its final stages, Richardson captured the crowd‰Ûªs attention with his charge towards the front of the pack, riding from dead last up to fourth with a handful of laps remaining.

But the man of the moment was Richardson‰Ûªs team mate Mitchell Evans ‰ÛÒ with only a lap remaining the Serco Yamaha rider continued to fight off Mastin and Harwood, showing that he was determined to redeem himself after a difficult first moto.

But it was the Ironman Harwood who had reason to celebrate at the conclusion of racing at Murray Bridge today, taking his first round win for the season whilst racing two talent packed categories. Second place on the podium went to Mastin followed by Serco Yamaha‰Ûªs Evans who concluded today‰Ûªs proceedings in third.

Despite not finishing on the podium today, DPH Motorsport‰Ûªs Todd enters the mid-season break with the Motul MX2 Championship lead.

The 2017 Motul MX Nationals will now commence the mid season break, with Round 6 set to be held at Nowra in New South Wales on Sunday July 2, 2017.

For more information on the 2017 Motul MX Nationals, head to www.mxnationals.com.au