Interview: Chris Hollis Talks About His his Return To Racing 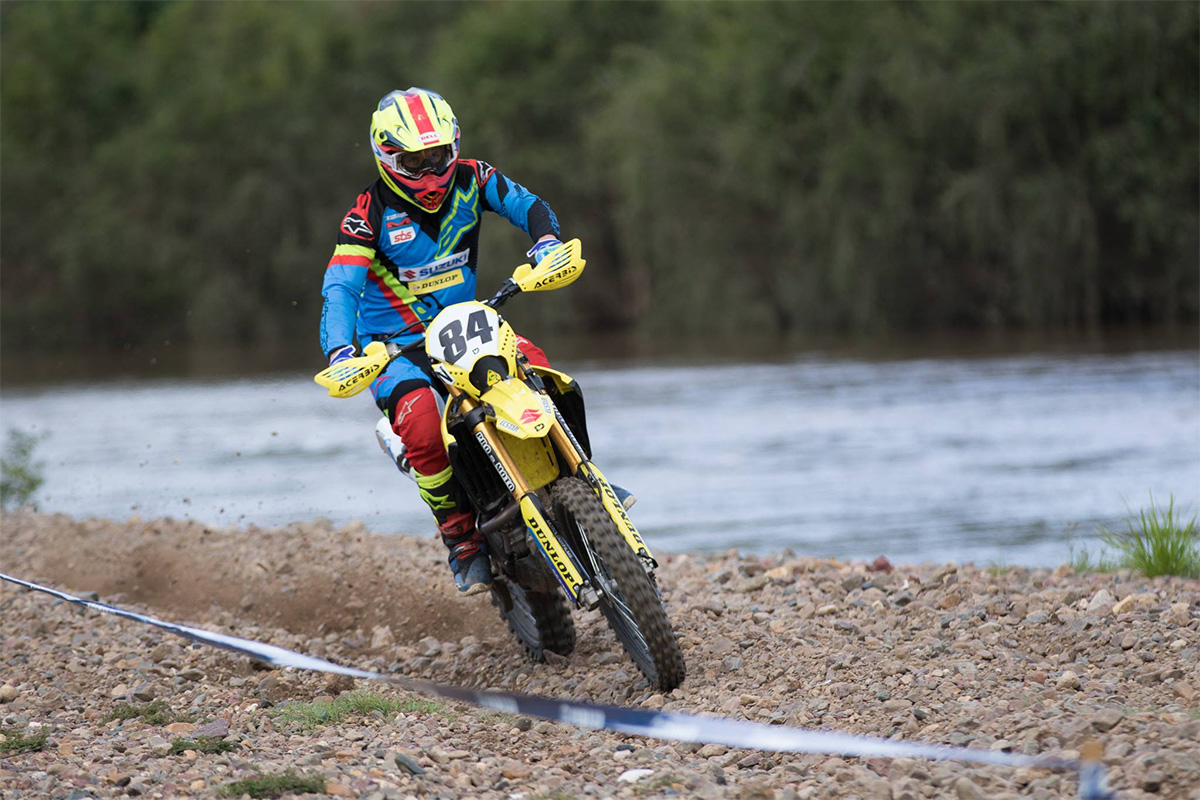 Making his return aboard the Suzuki RMZ-450 at rounds 1 & 2 of the Yamaha Australian Off-Road Championship (AORC) at Gympie Queensland, the former champion finished with a respectable sixth place finish in the E2 class.

Hollis is no stranger to success in the enduro game, winning the E2 class back in 2013 and placing second overall in 2015 and 2016. he also finished second at the 2016 A4DE behind French enduro champion Mathias Bellino, which also included a win in the final moto.

With the return of both Hollis and the A4DE for 2018, Motorcycling Australia caught up with Hollis ahead of his return.

Chris what has brought you back to racing? How did this come about?

I had been working for a year and had some time off but then I was like I want to go back racing, I haven‰Ûªt come back fully professional. I‰Ûªve got some great support and I‰Ûªm just having a ride and seeing how I go on the bike. I‰Ûªm not taking it too serious (this year), it was such short notice, I literally got the bike five days before Round 1 of AORC. I actually haven‰Ûªt had a bike since I retired, it‰Ûªs not like I‰Ûªve been doing moto‰Ûªs I had just literally rocked up and jumped on the bike and thought lets see what happens.

The bike is good, it‰Ûªs surprisingly good. It's just me at this point as I just need more time, I need a good few months to get ready and the weather up here hasn‰Ûªt made it easy for me with the flooding not letting me get on the bike. I have this week basically to get ready for the A4DE, but I‰Ûªm not where I need to be with my bike fitness, but the bike is good and I‰Ûªm excited to get back to the A4DE. 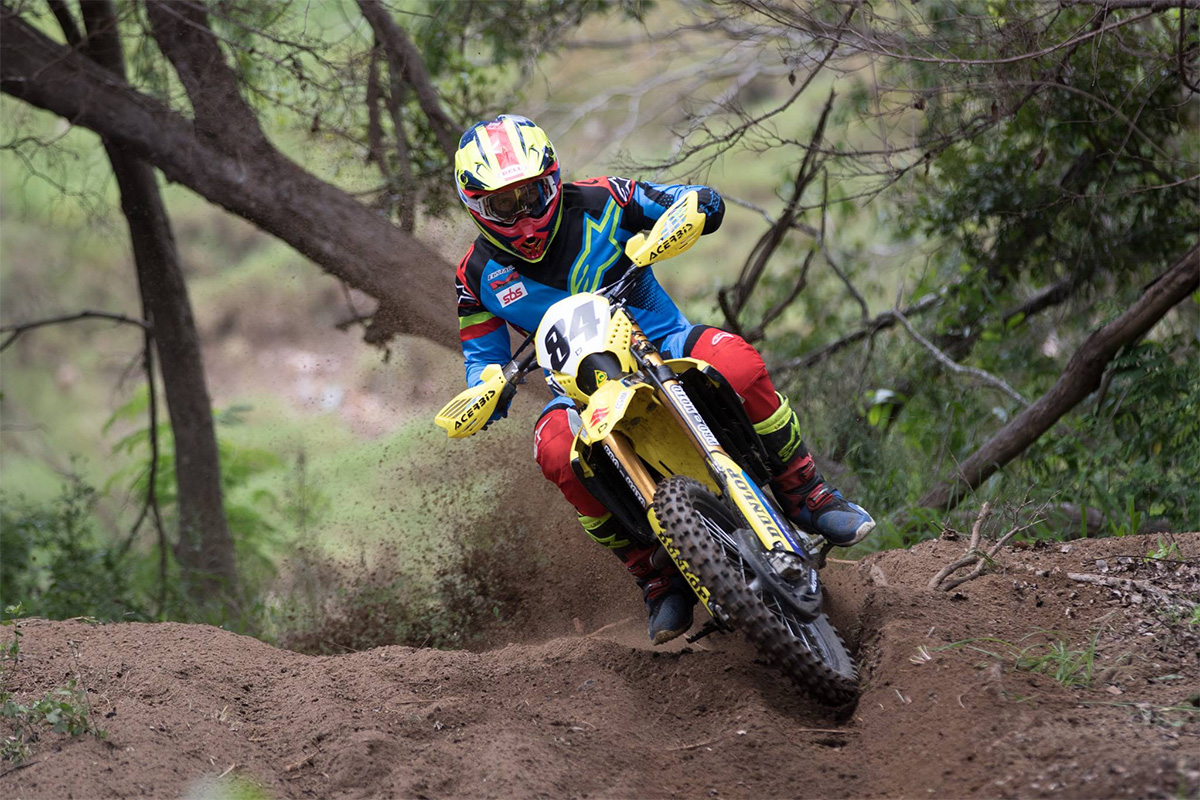 Hollis is campaigning the Suzuki RMZ-450 with support from Suzuki Motorcycles Australia, Photo: John Pearson Media
Your return at AORC must give you confidence heading into A4DE?

Yeah it was a solid return, in saying that Round 1 (Saturday) got the better of me and I wasn‰Ûªt used to racing and pushing myself to that level. I had no idea what the bike was going to be like going into AORC, I just thought I would deal with it and see where we ended up. The setup wasn‰Ûªt right for Round 2 (Sunday), as the track was a tight bumpy slow track and that beat me up a bit and to add to that I got stuck in a gully, but it was key to get some more time on the bike.

I am feeling good and excited to race the A4DE, it was funny being back at the racing and not being on a team. I got to just relax out the back and mingle with everyone and many people came up and spoke to me. When I was on a factory team people were almost scared to speak to you. I enjoyed the sociable side and I look forward to that same set up at the A4DE, I really am looking forward to having fun.

What is your goal for the A4DE, and to follow what are your goals for 2018?

To be honest I have no goals for the A4DE, I‰Ûªm just going to ride it and see how I go, as I just haven‰Ûªt had enough time on the bike just yet. I reckon I will perform better than I did at Gympie, as I feel I have the speed and with the extra few weeks on the bike I‰Ûªm confident I can perform better. The four day is a good race, I like the whole concept of working on your bike and knowing you having to be wiser and smarter with your times and it is a bit trickier than your conventional race.

For 2018, I will be giving it a bit more of a crack now as I have finished up working full time, and since finishing I am putting more time into my riding. I am looking forward to Hedley for Round 3 & 4 of AORC as I will have put in some work both on and off the bike, but in saying that I haven‰Ûªt had the best results there in the past. This year I am just going to see how I go and now without working I have realised how much time racing takes up, I am building a relationship with Suzuki with an aim to get involved in Adventure riding side of things and push that whilst racing. It‰Ûªs a comeback but not a fully professional comeback.

Who are your biggest rivals heading into the A4DE?

Everyone... all these young punks were riding so quick at AORC Round 1 & 2 at Gympie, I was like holy dooley a lot has changed in a year that‰Ûªs for sure. I see myself starting at the back and hopefully working my way through the pack. Milner and Sanders are hard to look past and if their performances at the opening AORC rounds are anything to go by, they will be right up there. The standard has lifted massively, and more people are doing this as a career which is great and pushes the standard up, putting Australia‰Ûªs riders up there with the best in the world. I don‰Ûªt have any rivals i'll be out the back just doing my thing.

Lastly, with the A4DE returning to the birthplace Cessnock, how does that feel as a rider?

It‰Ûªs really good, I‰Ûªve never gone there but Johnny Hall is the man who got me into the A4DE, he sponsored me back in 2005 at Wyong with a TM. He got me into changing tyres, and he really helped me out when I first got on the scene, and with this being his memorial is really cool. It all started with Johnny and with him being a legend of the sport it makes this special to return and take on the A4DE at Cessnock. 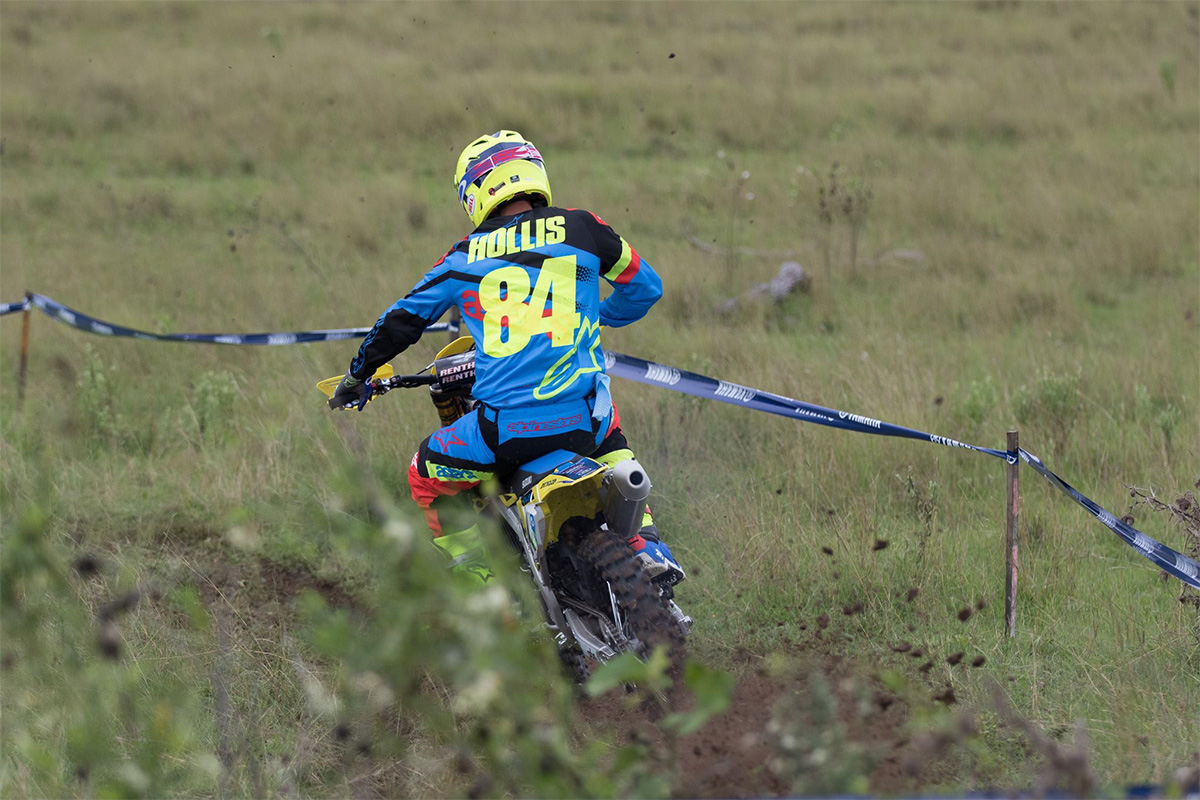 With very little time on the bike Hollis is not expecting a great deal at the A4DE in 2018 but then again he just may surprise many. Photo: John Pearson Media