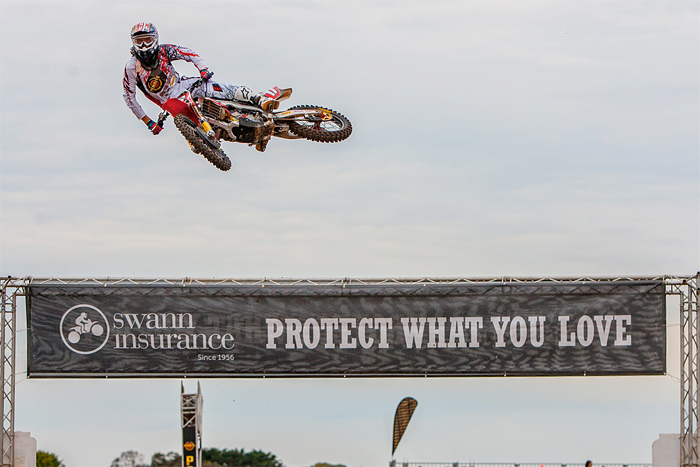 Australia's high-flying dirt bike heroes are set to have a fight on their hands for the spoils of the 2015 Australian Supercross Championship, with the announcement today that American ace Gavin Faith and Venezuelan champion Anthony Rodriguez will contest the entire series.

Faith, who is the defending SX2 Australian Supercross champion, and Rodriguez, who is a multi-time champion in his home country but has been based in the USA in recent years, will make a formidable international duo when they join the powerhouse Penrite Honda Racing team during their Australian campaign.

Both riders will line up in the SX1 class aboard Penrite Honda CRF450R race bikes when the gate drops on the fast approaching opening round of the $120,000 Australian Supercross Championship at Bathurst, NSW, on October 10, the weekend of the annual Supercheap Auto Bathurst 1000 V8 Supercars classic at Mount Panorama.

Confirmation of Faith and Rodriguez's appearance for the entire championship boosts the international rider line-up, which has already seen global supercross stars, American James 'Bubba' Stewart and American-based Australian superstar Chad Reed announced as high-profile contestants for round five of the championship at Sydney's Allphones Arena on November 28.

For Faith, his next Down Under campaign will be the fifth straight year he has taken aim on the Australian Supercross Championship ‰ÛÒ and he's been making a happy hunting ground of it while racking up endless frequent flier miles across the Pacific Ocean, by capturing the SX2 Australian title crown in 2012 and again last year.

But this year Faith moves up to the SX1 division, where multi-time Australian champion Matt Moss from Team Motul Suzuki is the defending champion ‰ÛÒ and their confrontation across six rounds in the four-state Supercross championship chase is set to be a classic.

"I am really looking forward to coming back to Australia," enthuses Faith, who hails from Fort Dodge, Iowa, but bases his racing and training program in the USA out of Florida.

"I love the country and am excited that the Australian Supercross Championship is growing.

"I was super-pumped to win the SX2 Australia championship last year and will be going all-out for another championship this year."

Meanwhile 20-year-old Rodriguez was a multi-time national motocross championship winner in his native Venezuela, before taking aim on a race career in the USA, which saw him rack up a dozen American amateur national titles before turning Pro.

In 2014 and 2015 Rodriguez scored a 250 class ride with the factory-backed Star Racing Yamaha team and this year nailed down sixth overall in the premier AMA 250 Eastern Region Supercross title chase, highlighted by two fifth place finishes.

Rodrigeuz bases his race program out of Georgia in the USA, and like Faith, is keen and eager to arrive Down Under and take on Australia's best racers in the 2015 Australian Supercross Championship.

Top Image: Gavin Faith will step up to the SX1 class in 2015