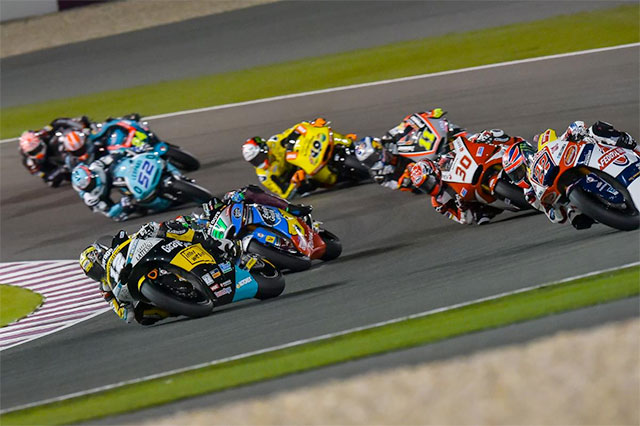 The Qatar GP saw eight riders in the Moto2 World Championship jump the start, many of them title favourites.

Repercussions would be felt right to the end with several penalties coming late in the race and shaking up the podium. But regardless of jump starts and penalties; Tom Luthi (Garage Plus Interwetten) was the outright winner of the first race of the year, his best opening round to a season in his career, having never previously finished above third in the first race.

Pre-season title favourites Alex Rins (Paginas Amarillas HP 40) and Sam Lowes (Federal Oil Gresini Moto2) were both hit with ride through penalties for their jump starts but salvaged an eighth and ninth place finish. No doubt the pair have the pace to challenge for victory and will be looking to avoid issues at Gran Premio Motul de la RepÌ¼blica Argentina and come back stronger. Both riders were on the podium in Argentina in 2015, Rins in second with Lowes in third. The competition looks fiercer than ever in the intermediate class so there‰Ûªs no guarantee they‰Ûªll be able to repeat their performance.

One of their biggest challengers may come in the form of Franco Morbidelli (Estrella Galicia 0,0 Marc VDS), the Italian showing himself as a potential race winner for the first time with a sustained challenge. He and Luthi battled head-to-head for almost the entirety of the race, Luthi just beating him to the line. Unfortunately Morbidelli was then handed a 20 second penalty after the race and pushed down to seventh. On both his previous visits to the Termas de Rio Hondo he has scored points with a best finish of fifth in 2015. The hard charging Italian has smelt victory and as he proved at the German GP in 2015 when battling Rabat, once he senses even a podium finish he‰Ûªll give it everything.

The Argentina GP was the first of eight wins for Johann Zarco (Ajo Motorsport) in 2015. As in 2015, Zarco‰Ûªs 2016 season got off to a problematic start as he too was hit with a ride through penalty and only managed 12th as a result. Zarco‰Ûªs quest to become the first back-to-back Moto2‰ã¢ champion might not be off to the best start, but it‰Ûªs already better than his predecessor‰Ûªs 2015 defence.

Jonas Folger (Dynavolt Intact GP) is also out for redemption in Argentina after throwing away a race victory that was almost certainly his in Qatar. The move to the Dynavolt Intact GP team has filled the German with a certainty and level of stability he previously lacked, making one to watch throughout the season.

Riding high on their podium return, Luis Salom (SAG Team) and Simone Corsi (Speed Up Racing) could also be threats. Salom especially has proven to be a rider who excels when he‰Ûªs confident and feeling good, he also made his Moto2 podium debut in Argentina back in 2014. Meanwhile Corsi, like his fellow Italian Morbidelli, is infamous for his hard riding style which initially seems to be working well with the Speed Up frame.