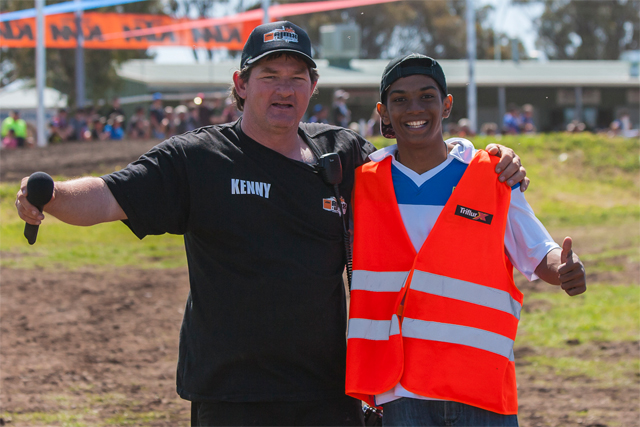 The inaugural KAJX Australian Motocross Podcast show is set to launch this Wednesday night the 11th of December after proving to be a huge success at this years KTM Australia Junior Motocross Championships at Horsham.

In 2013, KTM AJMX held at Horsham was host to many firsts; Horsham‰Ûªs first junior national, the introduction of the Mini Lites classes, and the first time in Australian Junior Motocross history a live audio feed of the event commentary was broadcast over the internet via the KAJX Podcast.

With 10,501 listeners over the 43 hours and 1 minute week-long broadcast allowed motocross fans from around Australia and the world the opportunity to keep up to date with how things were progressing at Australia's biggest Junior MX event.

This Wednesday night the 11th of December will another first for the KAJX Podcast, with a live show hosted by Kenny Watts scheduled to start at 7.30pm Australian Eastern Daylight Savings time with special guests including Honda MX2 star Josh Cachia, The Fanom's Jason Reed and World Enduro Champion Matty Phillips to name just a few.

‰ÛÏThis Wednesday night is giving us a taste of what we can do to help promote the sport and hopefully it's a great night for kicking back and hearing from a few of the biggest names in motox from the top privateer to the newly signed world champion Under 23 world enduro champion." KAJX Podcast host Kenny Watts stated.

Other guests on this weeks show include 2013 Motocross MX2 runner up, Kale Makeham, American bound Taylor Potter, Privateer Luke Davis who has just confirmed he will race aboard a Yamaha YZ450F in the MX1 class in 2014 and Jack McMahon from Ash's Spoked Wheels.

‰ÛÏI‰Ûªve had a lot of fun testing and preparing for this show,‰Û