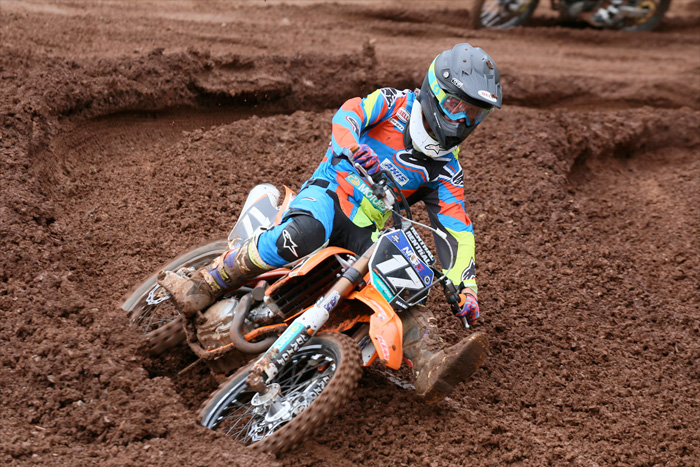 KTM Factory Support rider Caleb Ward made sure his debut national level ride on a big bore was one to remember, going within six points of winning the prestigious Mountain Man title at the famous event‰Ûªs 40th anniversary running, at Echo Valley Raceway in Toowoomba.

Despite only having his KTM 350 SX-F practice bike available to use in the unlimited capacity main event, Ward took it right up to 450-mounted Mosig, registering 2, 1, 2 results in the three back-to-back motos.

The championship would be decided in a tough 30-minute finale, and after trailing Mosig by a few seconds for much of the race, Ward surged hard in the closing stages to bring himself right up onto his opponent‰Ûªs back wheel, but was unable to effect a pass the pass.

‰ÛÏIt was good to race against Mosig who is obviously a top 450 guy." Ward commented. "In the last moto we sort of played a bit of cat and mouse - he sort of pulled a bit on me at the start, and then I was sort of matching him for ages.

"I made a few mistakes in the middle and he gapped me a little bit more. I waited and waited because I didn't know how well I would last on the big bike in the long moto and then right at the end I put in a big charge and managed to get onto his back wheel but I got held up by lappers on the last lap so that was a bit unfortunate, but it was a really good day.

Obviously he is on a factory Yamaha and I was just on my practice bike, which was pretty much stock. It‰Ûªs still faster than my factory 250 but I'm really happy with my speed and how I felt on the 350.

"I love it here. We had a national here this year and I did really well, and obviously this weekend track was prepped awesome and there were some ruts that sort of suited me. I really enjoyed it.‰Û