Iannone puts Ducati back on top at the Red Bull Ring 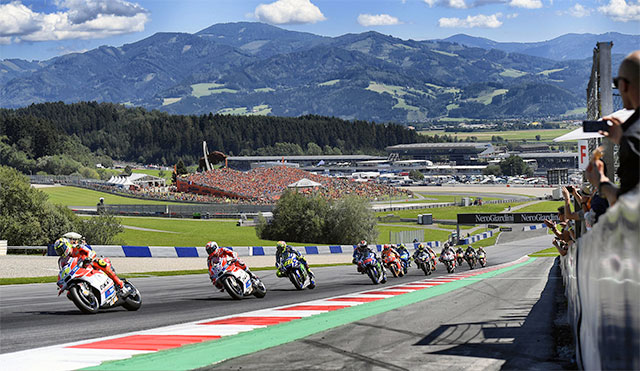 Ducati's Andrea Iannone took the chequered flag at the Austrian Grand Prix, round 10 of the MotoGP World Championship, to notch up his first-ever MotoGP victory, ahead of team-mate Andrea Dovizioso, who finished runner-up nine-tenths of a second behind, in his 250th grand prix race.

The two Ducati riders dominated the 28-lap race at the Zeltweg‰Ûªs Red Bull Ring, holding off attacks from Valentino Rossi and Jorge Lorenzo in the early stages: Iannone moved into the lead on lap 2 and was then passed by Dovizioso on the tenth lap. Dovi kept the lead until lap 20, but next time around was passed by Iannone who held onto first place until the flag.

Ducati returned to the winner‰Ûªs podium for the first time in six years, since Casey Stoner‰Ûªs victory in the 2010 Australian GP. The last Ducati 1-2 in MotoGP dates back once again to Australia, at Phillip Island in 2007 when Stoner won the race ahead of Loris Capirossi.

‰ÛÏI am really very happy, because in my opinion we did an incredible race," Iannone said. "I started off quite slowly and tried to stay up front without ever pushing too hard, because I knew that in the final stages I could have had a bit less pace than everyone else, having opted to start with the soft rear tyre, while all the others made a different choice. I ran the whole race keeping a bit of margin and my bike was really perfect. I think that we did a great job over the entire weekend and I‰Ûªd like to thank my team, all of Ducati and my crew chief Marco Rigamonti who have helped me improve so much in these last four years‰Û 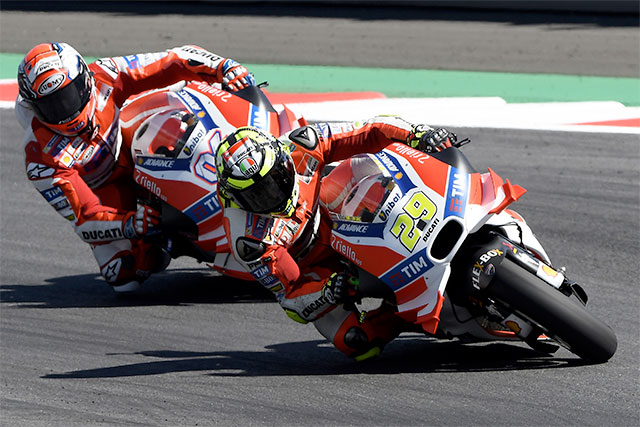 ‰ÛÏIt‰Ûªs a very important day for Ducati because we managed to obtain the win, a 1-2 even, that we have been chasing for such a long time," Dovizioso said.

"We‰Ûªve been working hard for four years and I am very happy to be a part of this project. I‰Ûªm disappointed that I was unable to win however, because today I had a really good feeling with the bike and I was really good under braking. We didn‰Ûªt take the risk of opting for the soft rear tyre, which in the end proved to be the winning move.

"Iannone on the other hand decided to use it and as he was the only one to do so, towards the end of the race he was at an advantage. In the last few laps, especially in the right-hand corners, I was losing too much time and I wasn‰Ûªt able to stay close enough to make an attack on him. It‰Ûªs a pity, but we must look at the positive side of the race because today we obtained a great team result‰Û 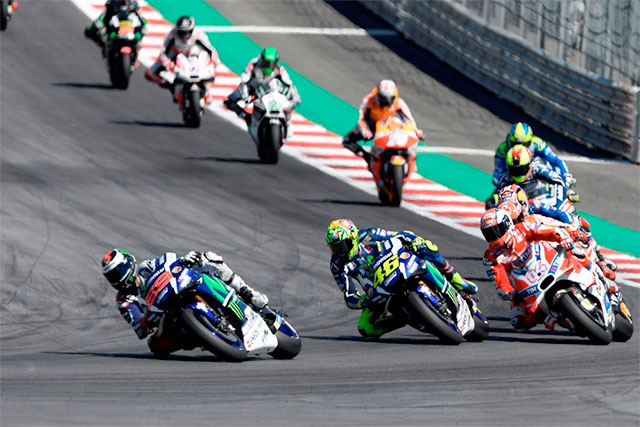 Jorge Lorenzo found the front for a few corners but was ultimately happy to get back to form with a third.
Movistar Yamaha MotoGP rider Jorge Lorenzo made a return to form, taking third. Valentino Rossi was also setting an impressive pace as he followed his teammate for most of the race and claimed valuable points with a fourth place finish.

"Honestly, when you have one or two challenging races like me, finishing in third place is not the same as a victory, but it almost feels the same because our rivals were almost in another world during the test and throughout the weekend, in qualifying and also the second part of the race," Lorenzo explained.

"To finally finish in third place just three seconds from the winner is a great result and we are very satisfied with the work we did on the bike and the concentration I kept during the race with the rear tyre moving a lot in the last part. I'm very happy and we should keep working, we recovered some points to Marc and it's important for the championship. Anything can happen, like we saw yesterday. Marc crashed and almost got seriously injured. We need to stay focused and have some luck and wait." 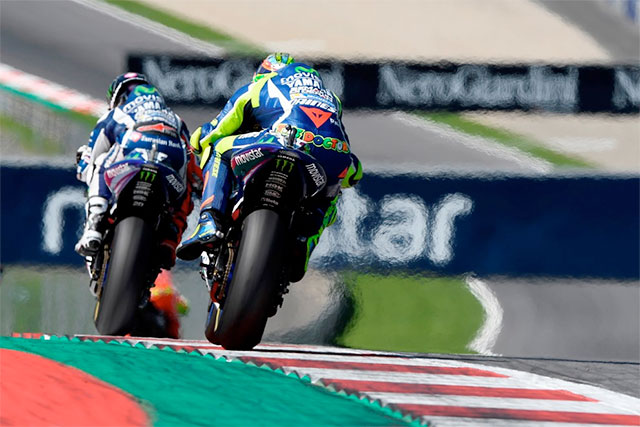 Valentino Rossi chased Jorge Lorenzo all the way to take fourth
Valentino Rossi was satified to be so close to the pointy end of the field at the end and to make up a few points on championship leader Marc Marquez.

"We were quite competitive at this track, which is not fantastic for Yamaha, and we took some points. Our rhythm in the race was very similar to those who took the victory and we will try to be stronger next week in Brno. For me, personally, Brno is a great track where I won for the first time, but the last few years I wasn't strong enough so I'm very curious to understand if this year I can be more competitive. About today's frontrunners, I think they will also be very strong in Brno because they are always fast and the track also has a lot of straights and it's so fast, so I think we have to keep an eye on them." 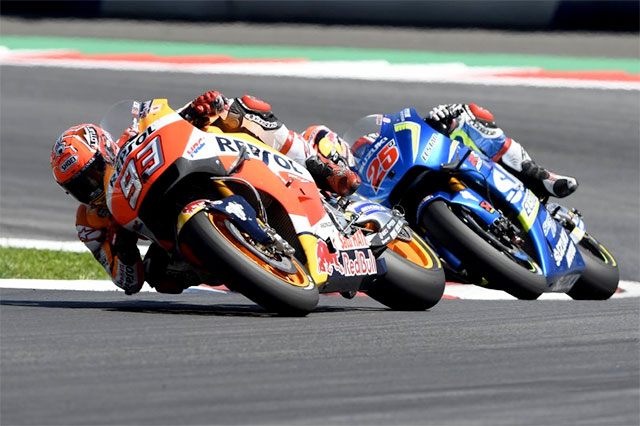 Marc Marquez bounced back from a nasty crash in qualifying to take fifth.
Marc Marquez took very important points with a fifth-place finish.

Marquez, who was nursing a bruised shoulder after suffering a heavy crash in yesterday‰Ûªs FP3, got a good start and entered the first turn in third but ran wide and found himself in fifth at the end of the first lap. He closely trailed the front group for over half the race, controlling Maverick ViÌ±ales behind him, but after a couple of small mistakes, he progressively lost ground and wisely settled for a top-five position.

‰ÛÏAfter how yesterday went, I‰Ûªm happy with today‰Ûªs race," Marquez said. "My shoulder didn‰Ûªt hurt at any time during the race, so no excuses there. I would have taken fifth position if it were offered to me before starting the race. I knew the Ducatis and Yamahas were fast, so this was the best possible outcome and it‰Ûªs positive that we‰Ûªve only lost five points compared to Lorenzo. Given the difficulties we‰Ûªve had, it was clear that our objective was to think of the fight for the Championship. I started aggressively, as it was the only way of trying to fight with the front group, but after making a couple of mistakes I lost the slipstream and it was very difficult to recover from that.‰Û 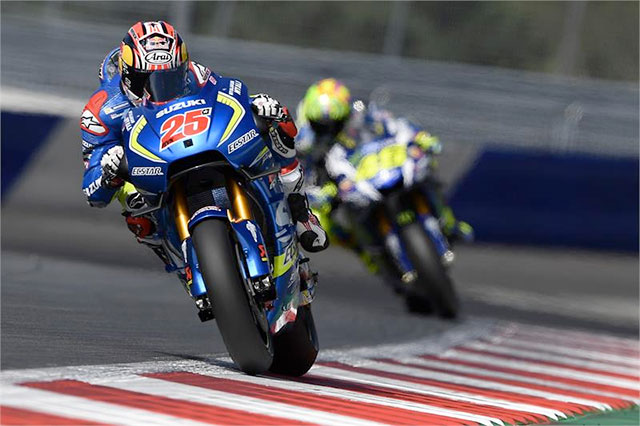