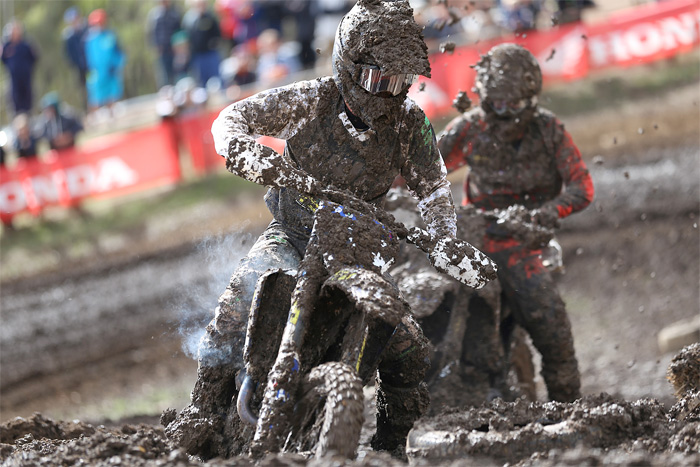 Husqvarna Australia's factory support men made the best of appalling conditions as today‰Ûªs third round of the MX Nationals fell foul of unexpectedly heavy rain.

This morning's downpour turned a perfectly prepared Broadford track into an almost unrideable quagmire - but for Australia's toughest professional motocross racers, the show went on regardless.

For the famous crowned ‰Û÷H‰Ûª brand, it was the MX2 riders who stole the show, with SD3 Husqvarna‰Ûªs Luke Arbon, and Nathan Crawford finishing third and fourth on the day behind Jed Beaton and Kyle Webster.

It was a deserved podium for Arbon (8-2) who rode intelligently to eighth in a dicey first moto before powering to the runner-up position in the second.

‰ÛÏThe first moto for us was wild today because I don't think people did very many practice laps and the track was just disgusting! It was a battle to get up some of the hills!" Arbon explained.

"I got a half decent start but just rode a little bit too tentatively, and ended up eighth, but I didn't crash and that was the main thing.

"In the second moto I got a good start but once Jed passed me I tagged onto him for as long as I could and pulled a bit of a gap on third and rode my own race to the end. The track was pretty crazy so I was just happy for it to be over, pretty much.

"There‰Ûªs a lot of fast guys this year so just being up there every week is the big thing.‰Û