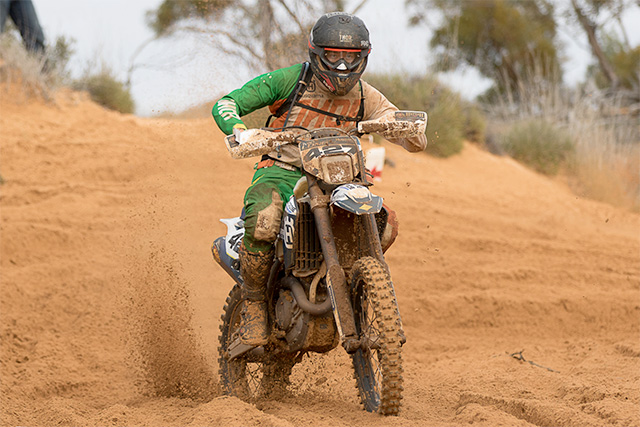 Hot on the heels of his sensational maiden podium finish at Finke a month ago, South Australian desert specialist Ivan Long made his Husqvarna FE 450 the only non-KTM in the outright top five, with fifth overall.

Long took a solid decking on the opening lap when another rider fell right in front of him, but shook off the physical effects, and the disgrace of that dirt biker‰Ûªs worst nightmare ‰ÛÒ racing without a helmet peak ‰ÛÒ to lead the 450cc 4T category for most of the event.

Long posted the fastest lap in his class, but as the gnarly, chopped out terrain eventually took its toll, he was ultimately run down in the last five minutes of the race by teenage motocrosser Callum Norton, and finished less than 14 seconds off the class win.

‰ÛÏI‰Ûªm stoked to be second in class and inside the top ten outright. We had a bit of an idea of where we wanted to be, and we exceeded that," Long said.

"We qualified 12th, so we had a little bit of work to do. We got to fifth, but on the first lap someone went down in front of me and I clipped him and had a big endo into the trees. I tweaked my neck a little bit and damaged my helmet, but we recovered from that and got back up there.

"It was very, very choppy with some big-time square edges, so it made it real tough to keep the bike pointed forwards.

"Young Callum got me five kilometres from the finish on the last lap! He was the man on the mission in the last couple of laps, and by then I literally had no energy left in my legs. He rode a really good race by the sound of it, so good on him.

"We still want to do more desert racing yet; we‰Ûªve got Yellow Mountain that we wouldn‰Ûªt mind having a go of in about a month‰Ûªs time.

"This FE 450 is a hell of a weapon ‰ÛÒ we pulled it out of the box a week before Finke and she‰Ûªs a bog stock engine with suspension, tyres and a steering damper, but apart from that, pretty much standard," Long concluded. 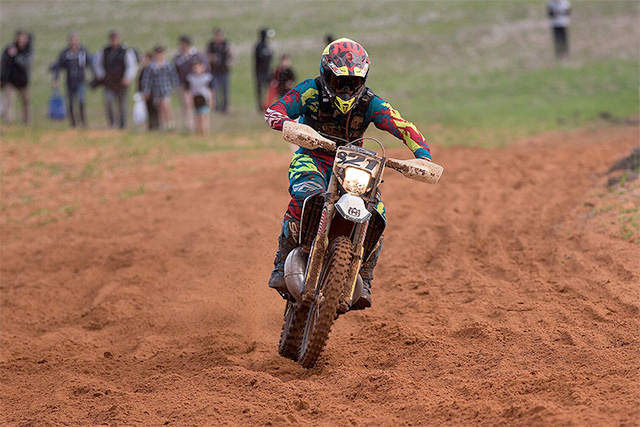 He did so despite pitting every lap for fuel, and giving away a pile of top-end grunt to his 450-mounted rival Angus Gelly.

He finished second in the class ahead of Liam Mason, and claimed two moral victories; fastest lap in the U19 class, and one extra lap over the senior 250cc 2T class winner.

‰ÛÏThis is my second time here and it‰Ûªs heaps better when you don‰Ûªt crash in Prologue and start 356th!" a bemused Higlett explained.

"I started 30th and worked my way up to 19th, so I was pretty happy with that. Especially on the little 250 ‰ÛÒ I was flat everywhere. I got passed on a fair few straights by the bigger bikes, but I‰Ûªd get around them in the corners so it doesn‰Ûªt matter! I‰Ûªm keen to get back to some slower stuff now though, it‰Ûªs pretty scary when you get a bit sideways holding it on hard, it fully freaks you out!

"I got second in class to Angus ‰ÛÒ I was leading for five laps but he got me towards the end. He was fuelling every second lap and I was fuelling every lap, so that made it harder, and being on the little bike his 450 would pull away heaps on the straights. I was hoping for the win, but I‰Ûªm still pretty happy with second. I didn‰Ûªt make it as easy on myself as I could have, but I had fun and it was good to be in the top 20.‰Û