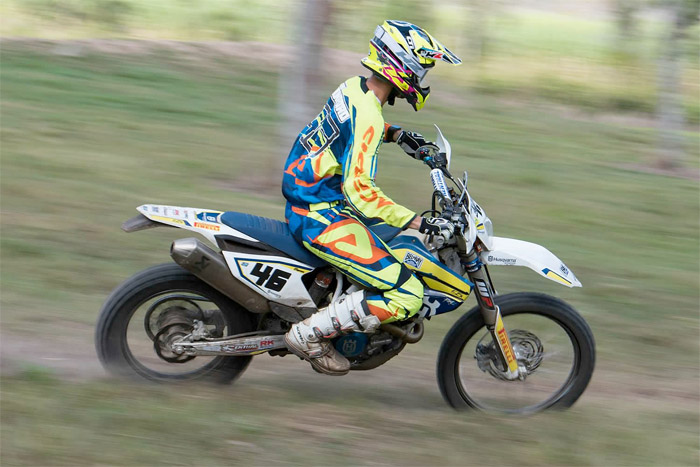 The combination of Husqvarna Enduro Racing Team rider Lachy Stanford and his Husqvarna FE501 is leading to career-best results for the smooth-riding Byron Bay ace, a fact demonstrated as he powered to his fourth Queensland enduro championship at the weekend.

Making the result all the more spectacular was Stanford's Husqvarna teammate Fraser Higlett, who in his first senior year secured a Husqvarna 1-2 in the championship, just three weeks after fracturing his collarbone!

Stanford sealed the championship in the best possible style, with an impressive victory ahead of Tom McCormack and Higlett in conditions which started out fine but ended in the diabolical at the final round of the series at Gum Valley near Mackay.

Stanford clinched outright victory in every single one of Saturday's nine special tests, as well as the two held on Sunday during a torrential downpour.

Stanford‰Ûªs Queensland championship is his fourth such title in a row and comes in a year when he is reaching career-best form at the highest levels of the sport in Australia, the 25-year-old currently holding the runner-up position in the standings of the Australian Off-Road Championships at its halfway mark.

‰ÛÏThe tracks here were world-class; they've done an awesome job." Stanford commented. "We had roughly 12 kilometre loop that was taking 18 minutes to get around, and we ended up doing nine sprints because they were forecasting big rain on Saturday night. So we did a lot of bike time there and I won every test outright, which is cool.

"The 501 is amazing, I don't know what it is, I just gel really well with this bike. I feel really comfortable on it and can put it where it needs to go. It‰Ûªs easy to ride, it suits every track and it just suits my riding style to a T. You can go from fast flowing track into tight technical stuff, and it will be like a dream.

"On the Sunday it rained hard and they only did two tests with the track was pretty much underwater. Some of the straights were down in between the cane fields and it was pretty fun aquaplaning down there. John Hand, the owner of the property, is just a real hard old school enduro guy who has done Six Days and everything. He wasn't listening to all the sooks, he was like just "nah, get back out there!" Old school! John‰Ûªs good.

"Winning my fourth State championship is cool but I‰Ûªve definitely got my eye on bigger prizes these days. But when it's this much fun and we are doing this much racing, it‰Ûªs a good warmup for the Aussies. Two hours and 45 min of sprint racing on the Saturday was good training for Hattah too.

"Having said that, King Kirk has won 11 Queensland titles now so I want to beat his record - I'm only up to four so I‰Ûªve got a lot to go.‰Û