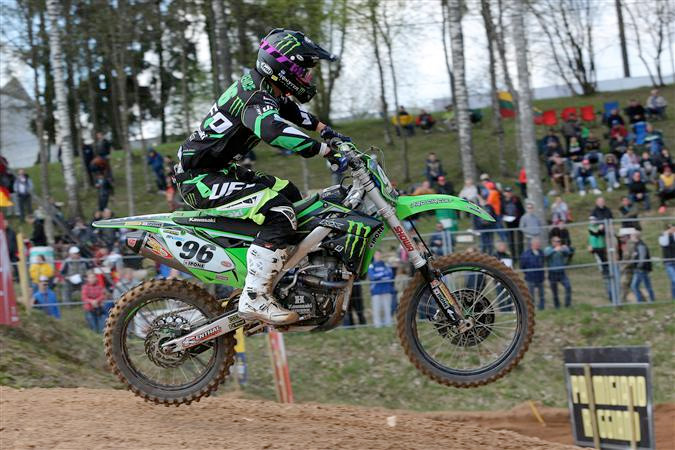 Australian Hunter Lawrence of Monster Energy CLS Junior Team Green once again impressed in the two FIM European EMX250 races that were held alongside of the MXGP of Lativia on the weekend.

Hunter was impressive as he overcame first lap crashes in both championship motos to finish sixth overall and advance to second place in the series standings.

Twenty second on the opening lap of the first race, he charged through the pack to finish fourth in the opening 29 minute moto, just over three seconds behind the winner.

A collision at the start of the second race left the teenager even further back but he charged hard to cross the line seventh.

‰ÛÏIt was a good and a bad weekend." Lawrence reflected. "The riding was good, but the results didn‰Ûªt really reflect how I rode.

"We've made some good progress since Valkenswaard. In the first moto I crashed by myself on the first lap and came back from twenty second to fourth; that was not bad even if I was not so happy with this crash. There was a crash at the start of the second moto; I don‰Ûªt really know what happened but I was in it and another wheel was stuck between my rear wheel and the frame so it took a lot of time to restart in last position.

"I again came back through the pack to finish seventh; that is never easy as everyone is trying to make aggressive passes and you need to find your way. I‰Ûªm now second in the standings; we‰Ûªll continue to work hard and hopefully we‰Ûªll be even stronger in Germany next weekend.‰Û