The 37th MXGP race day of 38 this year is in the books and after an afternoon storm the season‰Ûªs last Qualifying Races took to the tricky hillside of the Villars sous Ecot circuit for the MXGP of Pays de MontbÌ©liard today.

When it was all said and done tomorrow‰Ûªs French grand finale will see Rockstar Energy Husqvarna Factory Racing‰Ûªs Max Anstie and Team Suzuki World MX2‰Ûªs Hunter Lawrence line up to the gate in pole position.

All of which was in preparation for tomorrow‰Ûªs points paying races, especially in MX2 as the championship will be decided between Red Bull KTM Factory Racing‰Ûªs Pauls Jonass and Suzuki World MX2‰Ûªs Jeremy Seewer. 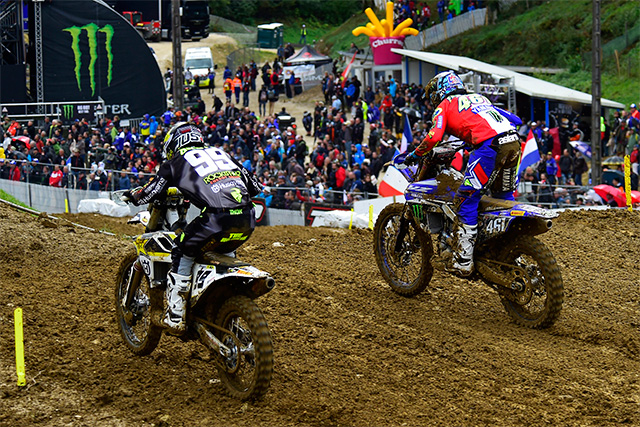 MXGP class winner Max Anstie (99) battles with Romain Febvre . Credit: Youthstream
When the gate dropped for the last qualifying race of the year several riders bustled into the first turn, but coming out with the early lead was Rockstar Energy Husqvarna Factory Racing‰Ûªs Max Anstie. The MXGP rookie, Anstie, led the field for both the first and opening lap before 2015 MXGP Champion, French native, and the last winner around the Villars sous Ecot circuit, Monster Energy Yamaha Factory Racing‰Ûªs Romain Febvre, took the premier position.

Behind them was Rockstar Energy Husqvarna Factory Racing‰Ûªs Gautier Paulin to the delight of the french fans. For the first lap Paulin was followed by Honda Redmoto's Valentin Guillod before a mistake from Guillod.

Taking over the spot of Guillod was Team Suzuki World MXGP‰Ûªs Kevin Strijbos. Strijbos would later catch up to Paulin and make an attempt to pass but Paulin pinched him off in a corner from the outside line. 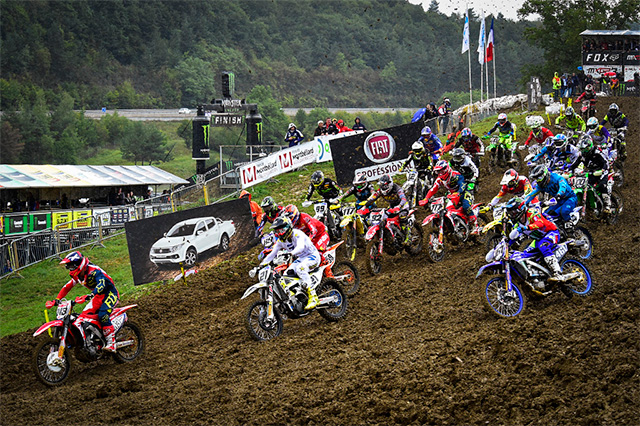 Rain hit the track before qualifying and it made heavy going for all classes.. Credit: Youthstream
Shortly after Strijbos tried to make the pass he was the one under pressure in the form of Red Bull KTM Factory Racing‰Ûªs Jeffrey Herlings. Herlings slid by the Belgian and continued forward toward the back wheel of Paulin. When Herlings caught Paulin he tried to pass him in the same corner as Strijbos did laps ago. Paulin now on the inside didn‰Ûªt budge and in turn forced the #84 to take the outside. While Paulin‰Ûªs move worked Herlings was able to make the pass later in the lap.

Back up front Febvre made a mistake allowing Anstie to get alongside him, the pair jostled each other around but kept the racing clean with only centimeters between them. Febvre barely managed to hold Anstie off and with a few laps to go he again created a slight gap over the Brit. Anstie wasn‰Ûªt done though and as the crossed the finish for the penultimate time Anstie jumped in the lead as Febvre lost traction.

Anstie held the lead over Febvre for the remainder of the race and took his first MXGP win of any kind.

‰ÛÏIt was awesome to be battling with Romain Febvre, the french crowd were really rooting for him, it was a little bit similar to Switzerland, but there I was battling with Tonus," Anstie explained. "This time I was a little bit nervous the first few laps and he passed me but then I found some lines, relaxed a little bit and I thought in the last five minutes I could go a bit faster, we had a really good battle going on. I know it‰Ûªs Saturday‰Û_but a race win for me is a race win and it was really cool!‰Û 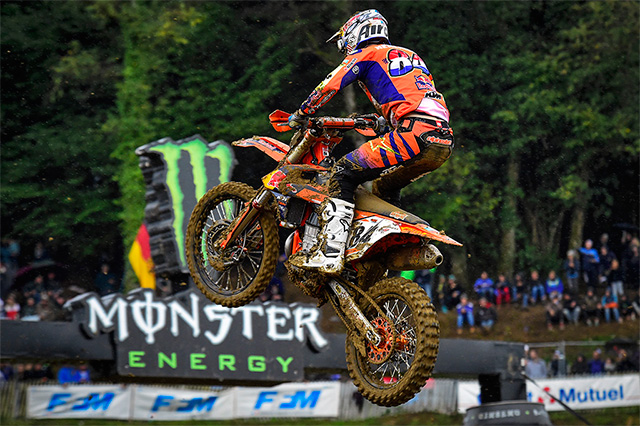 Jeffrey Herlings took the final spot on the MXGP podium. Credit: Youthstream
Herlings went on to take third just ahead of Paulin and Strijbos. Paulin later said: ‰ÛÏIt was really important to finish in the top 5 like every Qualifying Race. I made some mistakes on the first laps which cost me a lot, I was riding safe and trying not to make any other mistake to be there for tomorrow.‰Û 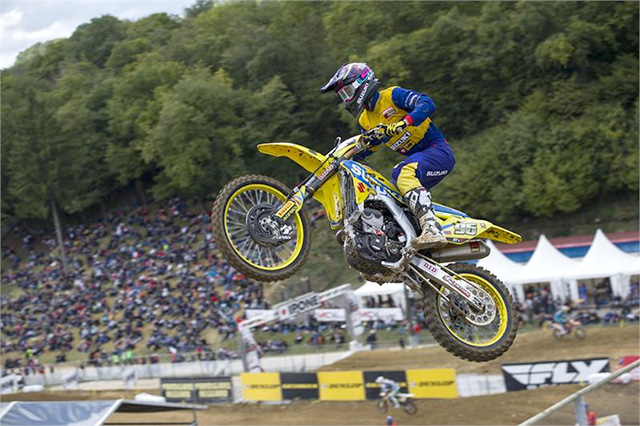 Australian Hunter Lawrence took his maiden qualifying race in MX2. Credit: Youthstream
Lawrence took the lead and looked the most comfortable of anyone on the wet Villars sous Ecot circuit in the process. Lawrence led the race from start to finish and in the end won by over 24 seconds.

Behind Lawrence was Jonass and the rest of the field including Lawrence‰Ûªs Team Suzuki World MX2 teammate Jeremy Seewer. Seewer first battled for third with HSF Motorsport Team‰Ûªs Brian Bogers then after securing the position capitalized on a mistake of Jonass to take 2nd.

Seewer only held the spot for one lap though as Jonass went back by and Seewer later crashed dropping him to an 8th place result. Back toward the front HRC MX2‰Ûªs Jed Beaton was having an impressive ride to a 4th place finish ahead of HSF Motorsport Team‰Ûªs Davy Pootjes.

Lawrence in the press conference stated: ‰ÛÏEveryone wants to do well the last round but also I want to do good every race. I felt good on this track and I‰Ûªm loving it. It would be cool to finish off the season with a good result then to go on to the winter and get ready for next year.‰Û 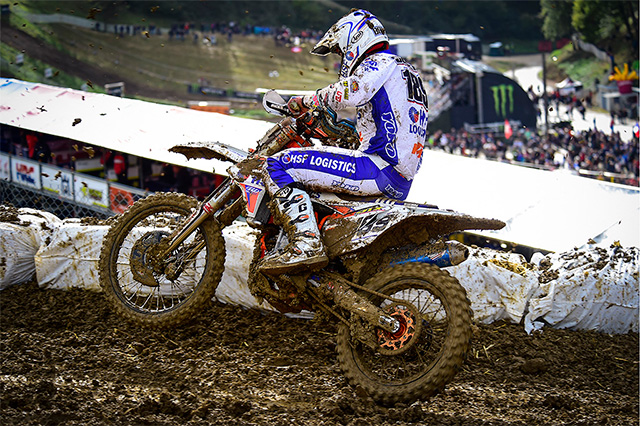 Brian Bogers finished behind championship leader Pauls Jonass and Lawrence to have third pick of the gate. Credit: Youthstream
Jonass was in a race of his own the last laps and took second to which he said: ‰ÛÏI feel good, I really enjoy this track especially this morning when it was drier there was some really nice ruts and the dirt was good. The race went really good today and I got a good start then finished 2nd which is good and I‰Ûªm really looking forward to tomorrow.‰Û