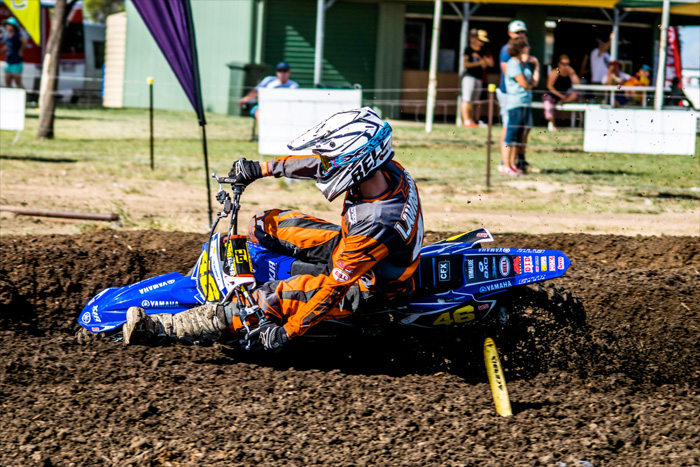 Queensland Yamaha Junior Racing racked up two more Queensland Motocross Championships victories and a second place after the final round of the championship was completed at Tivoli Raceway, over the weekend.

The two day event saw Queensland‰Ûªs best riders duke it out for the state championship and Yamaha riders prominent in the results across all major classes.

Hunter Lawrence was again the star of the show, taking the win in both the 13-15 years 125cc and also the 15 years 250cc. Lawrence took the double, winning the round as well as the championship and went undefeated in championship on both bikes.

With the World Junior Motocross Championship looming in July, Lawrence was in full stride all weekend and trying to put the finishing touches on his preparations for the event in Spain on a track that will be similar to what he experienced at Tivoli.

‰ÛÏI spent the last two weeks in New Zealand working with Josh Coppins so it was good to put some of the things we worked on in a race situation." Lawrence said. ‰ÛÏMy starts were pretty good all weekend, which will be important in Spain and I felt my speed was good on a track that offered some tricky ruts and jumps.

‰ÛÏThank you to the Yamaha Junior Racing and all our team sponsors for the effort and energy they put into my racing as well as my family who devote so much time to motocross for me,‰Û
Levi Rogers landed in second place on his YZ85
Levi Rogers also chipped in on the podium action, finishing the day second overall in the 9-11 years 85cc class and in the same position for the championship. Rogers rode well all weekend as he put in fast laps and was aggressive with his attack on the track.

Rogers finished second in all three motos contested during the weekend but continues to show huge improvement every time he hits the track.

‰ÛÏI really like the Tivoli track and have always done pretty well when I have raced here,‰Û