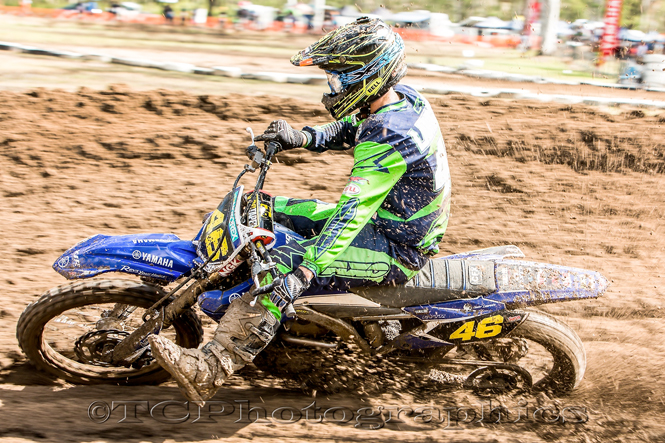 Queensland Yamaha Junior Racings', Hunter Lawrence, continued his sensational start to the 2015 season with another impressive performance at round for four of the Shell Advance Sunshine State Motocross Series taking the win in both the 13-15 years 125cc and the 15 years 250cc.

The Sunshine Coast teenager dominated proceedings with another six wins from six starts during the event and remains undefeated in the series so far. With just under a few months until he jets off to the World Junior Championships in Spain, Lawrence is right in the middle of a heavy training load but is showing good form and fitness as his preparations continue.

The sandy Hervey Bay circuit offers plenty of challenges and the surface always cuts up rough and rutted making it a difficult track to race well, but Lawrence looked impressive as he flowed around the track.

‰ÛÏI have had a bit of focus on starts the last couple of weeks as I will need to be on my game when I get to Spain, so it was good to get a few good ones today." Lawrence said. "I hit the first turn inside the top three in nearly every race and that‰Ûªs makes things easier on a sand track.

‰ÛÏThe track was a new layout today and it was good to ride something different. It was a bit tight in the middle but the corners shaped up well and it was fun to ride, so thank to the club for their effort and also to Yamaha Junior Racing."

Levi Rogers had a frustrating day on his YZ85cc in the 9-11 years division. While he finished the day in a respectable fourth place, it wasn‰Ûªt without drama as Rogers found himself playing in the sand each and every race after a crash.

He was in the lead of the opening moto before crashing. He was involved in a second corner pile up in race two and then two crashes in race three topped off his day. He still managed to finish with 4-2-6 results to claim fourth for the round and maintain second place in the series.

‰ÛÏIt wasn‰Ûªt my day! I got to the front in race one then I blew through a berm. Race two and there was a heap of riders down in the second turn that I was a part of. Then race three I crashed on the opening lap trying to move into second and I crashed again as I came through the field when the rider in front of me went down and his bike hit me.

‰ÛÏMy speed was ok, maybe I was just trying too hard as they were all silly crashes. I need to improve my sand riding, so I will try and do more of it in the coming weeks,‰Û