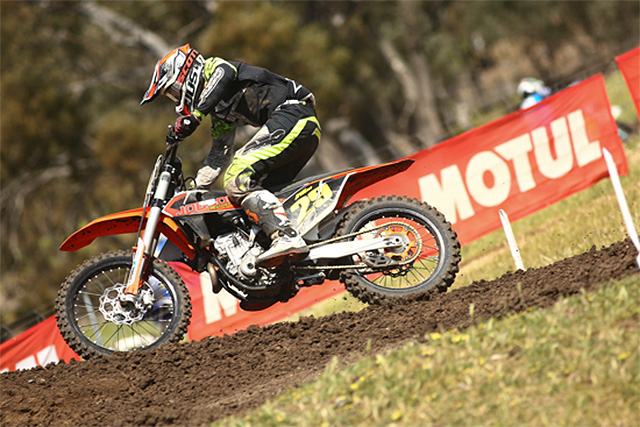 Day four of the KTM Australian Junior Motocross Championship (AJMX) in Horsham, Victoria, saw heat racing conclude as each and every category gears up for two days of complete finals action.

For the necessary classes, the top 40 combined riders from the heats will transfer into the finals, where they‰Ûªll have three motos to make their mark in the 2017 edition of the prestigious event.

Junior Lites 15 Years - Heat 5 and 6:
Victorian Mason Semmens continued his dominance in the Junior Lites 15 Years class, stamping his authority with a 15 second race win over Rhys Budd (NSW) in heat five. Budd sat comfortably in second for the duration, as did Western Australian Mat Fabry in third. Jake Barron (NSW) and Connor McNamara (NSW) completed the outing in fourth and fifth respectively.

Queenslander Bailey Malkiewicz charged to the heat six win after obtaining the lead on lap one, adding to the excitement of the finals ahead. New South Welshman Josh Bova navigated his way to second, followed by Joshua Whitehead (NSW). Fellow New South Welshman Ezrah Demellweek-Dodds narrowly edged out Jack Kukas (QLD) for fourth, who bounced back from a crash on the opening lap.

Junior Lites 13-U15 Years - Final 2:
Final number two of Junior Lites 13-U15 Years belonged to New South Welshman Dante Hyam as he swept the moto, beating home Estonian Meico Vettik by a confidence-boosting 14 seconds. The fight for third came right down to the wire between Corey McMahon (NSW) and Liam Andrews (VIC), with only four hundredths of a second separating the pair - McMahon with the advantage. Race one victor Levi Rogers recovered from a poor start to claim fifth.

Female Junior Lites 13-U16 Years - Final 2:
Western Australian ace Tahlia O‰ÛªHare continues to cement herself as the title favourite after adding another commanding win to her name in the Female Junior Lites class. Tanesha Harnett (NSW) was able to hang onto the back of O‰ÛªHare in the early stages, closing out the race in second. New Zealand‰Ûªs Roma Edwards and Racheal Archer were awarded third and fourth positions, with Queensland‰Ûªs Tahlia Drew pulling through for fifth.

125cc 15 Years - Final 2:
Mason Semmens (VIC) and Bailey Malkiewicz (QLD) put on an incredible display in the opening laps of the older age group 125cc class, as the pair were inseparable until a mistake from the Queenslander saw him relegated to third. Semmens walked away with the win, as Jack Kukas of Queensland capitalised on Malkiewicz mistake to take second. Mat Fabry (WA) was fourth followed by an impressive ride from Riley Ward (QLD) in fifth.

125cc 13-U15 Years - Heat 5 and 6:
Kickstarting the day was heat five of the 125cc 13-U15 Years class, and with the track freshly watered, it served up challenging and slippery conditions. It didn‰Ûªt phase Queensland‰Ûªs Tye Jones though, who grabbed the early lead and charged to a well deserved victory. Estonia‰Ûªs Meico Vettik claimed second after a couple of minor mistakes, while Liam Andrews (VIC), Regan Duffy (WA) and Grason Veitch (NZ) completed the top five.

Mini Lites BW 14-U16 Years - Final 2:
In the older age group Mini Lites class, Queensland duo Jai Walker and Noah Ferguson battled for the lead in the opening stages, but just after the halfway point, Ferguson made a costly mistake, allowing Walker to run away with the victory. Tyler Darby (NSW) latched onto Ferguson, but was unable to match his pace in the closing stages to secure third ahead of Zack Wright (VIC) and Kai Newbold (SA).

It was an Alex Larwood (SA) show once again in heat six, dominating the race to add one more victory to his tally. The real battle unfolded behind him between rivals Brad West (QLD) and Kipp Adams (VIC), who fought to the very last lap. West made a mistake with just few corners to go, but in a dramatic turn of events, Adams would have issues of his own, allowing West by to be awarded third. New South Welshman Connor Rossandich and Queensland‰Ûªs Jake Kowal closed out the top five.

Mini Lites SW 9-U12 Years - Heat 5 and 6:
In heat five of the small wheel Mini Lites division, Ryder Kingsford of New South Wales added another victory to his name, blitzing the field by a staggering 39 seconds. Queensland‰Ûªs Kobe Drew settled into second, as New Zealand duo Rhys Jillings and Cole Davies were third and fourth ahead of previous heat race victor Connor Towill.

Tasmania‰Ûªs Jett Burgess-Stevens continued his dominance in heat six, clearing the field by 16 seconds to capture the race win. Queenslander Jack Mather positioned himself in a comfortable second, while visiting international Krittapat Keankum of Thailand held on for a distant third. South Australian Clay Burnett crossed the line in fourth followed by West Aussie Kayden Minear in fifth.

65cc 11-U12 Years - Final 2:
Race two of the 65cc 11-U12 Years class was captured by New South Welshman Connor Towill, who led a charge to the flag that brought him a five-second victory. Queensland‰Ûªs Jesse Holding kept Brenton Wilson (QLD) at bay for second, as did Seth Burchell (NSW) with Cody Kilpatrick (NSW) to hold down fourth.

Heat six saw a fierce fight for the win between Braden Plath (QLD) and Kayden Minear (WA), battling right down to the final moments, but it was Plath who came out on top. Liam Owens of Queensland slipped into third, as Thomas Wood (QLD) and Cooper Dudley (NSW) closed out the first five.

65cc 7-U9 Years - Final 2:
The second final of the 65cc 7-U9 Years class saw Jack Deveson (NSW) defeat yesterday‰Ûªs victory Seth Shackleton (WA), crossing the chequers with a healthy seven-second advantage. Heath Fisher (QLD) placed himself into third, while it was Ryder Wilson (NSW) and Max Stevenson (QLD) who rounded out the top five.

50cc Division 2 7-U9 Years - Final 2:
In the second final of the 50cc Division 2 7-U9 Years class, West Aussie talent Seth Shackleton laid down a flawless moto to win by a 15-second margin, as it was Jackson Fuller (QLD) and Max Stevenson who duked it out for second and third respectively. Sonny Pellicano of Western Australia placed fourth ahead of Queensland‰Ûªs Slade Oberhardt.