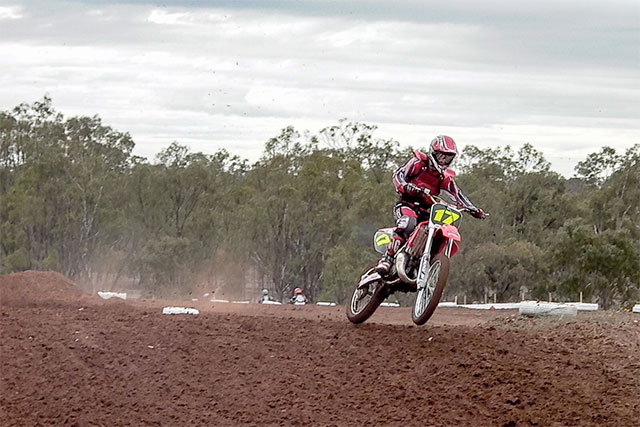 The Horsham Motorcycle Club‰Ûªs annual 2 Day Open racing event known at the MX Amateurs will play host to a new class in 2017.

On behalf of Sue, Brendan and Grady Holland and the Horsham Motorcycle Club, it's with much pleasure the club officially announced the naming of the 125 Cup and that it will now be known as the 'Bronte Holland Memorial 125 Cup.'

Way back in 2000 the Horsham MCC changed its direction and moved toward making the Dooen Recreation Reserve into a national standard venue. In 2001, the track was built in the current form as we see it today and ran the first MX National. In 2017, 17 years later the club is on track for the two biggest seasons in the history of the club, starting with the MX Amateurs over the long weekend in March.

"It's an honour to be given the blessing for the Holland family to run the first ever 'Bronte Holland Memorial 125 Cup' which just happens to be the 17th anniversary of the first ever 125cc bike to race a national event at Horsham which was won by none other than our own Bronte Holland running the famous number of 17," a club offoical said, "It's a sign that everything is in alignment and we make this a massive event and honour of Bronte and race in the spirit in which he rode.

For 2017, the 'Bronte Holland Memorial 125 Cup' will be run as the feature senior race over both days of the MX Amateurs, and in 2018 will be the juniors turn to race it in the lead up to the World MXJuniors.

Wimmera's Bronte Holland raced with his two favourite different numbers 17, or 1, which happened on several occasions as a state and national champion as a junior. As a senior, Bronte raced with a combination of those numbers as 711. On one occasion, having to change his race number due to a technicality and ran 171.

Set yourself a goal for 2017 and beyond, for those who own, can borrow or buy a 125cc 2-Stroke. Come and enjoy the opportunity and race the inaugural 'Bronte Holland Memorial 125 Cup' memorial 125 cup.

Throughout his young life had become known as one of Australia‰Ûªs fastest young racers. As he turned pro during late 2005 (when he was sixteen), early 2006, with little financial backing, his blistering speed and determination saw him become one of the fastest guys on our national Pro Lites tour.

The friendly country kid began a series of coaching days and opened a motocross techniques school that was widely successful in his state of Victoria, while on the race track Holland attracted the attention of major teams and signed with a Yamaha Factory Supported Team.

He was one of the youngest riders in the pack but was looked upon as becoming one of Australia‰Ûªs future stars to tackle America and the world. While practicing for Supercross (13th Feb 2007), Bronte had an accident suffering a career-ending spinal injury, in a wheelchair, cutting short the dreams he held onto his whole life.

Being the fighter that he was, and his determination to be involved in the sport, he continued his coaching, still attended races, commentating events and was still widely involved in the industry, and had set his goals on being able to walk again.

On the 5th June 2009, Bronte suffered a stroke in his sleep and passed away. Bronte's larrikin personality, fighting spirit and passion for the sport made him popular with his peers. His unexpected passing placed the entire Australian Motocross/Supercross community into mourning with the loss of someone who was a true inspirational and dedicated fast racer who had his career taken away from underneath him, he was 21 years old.