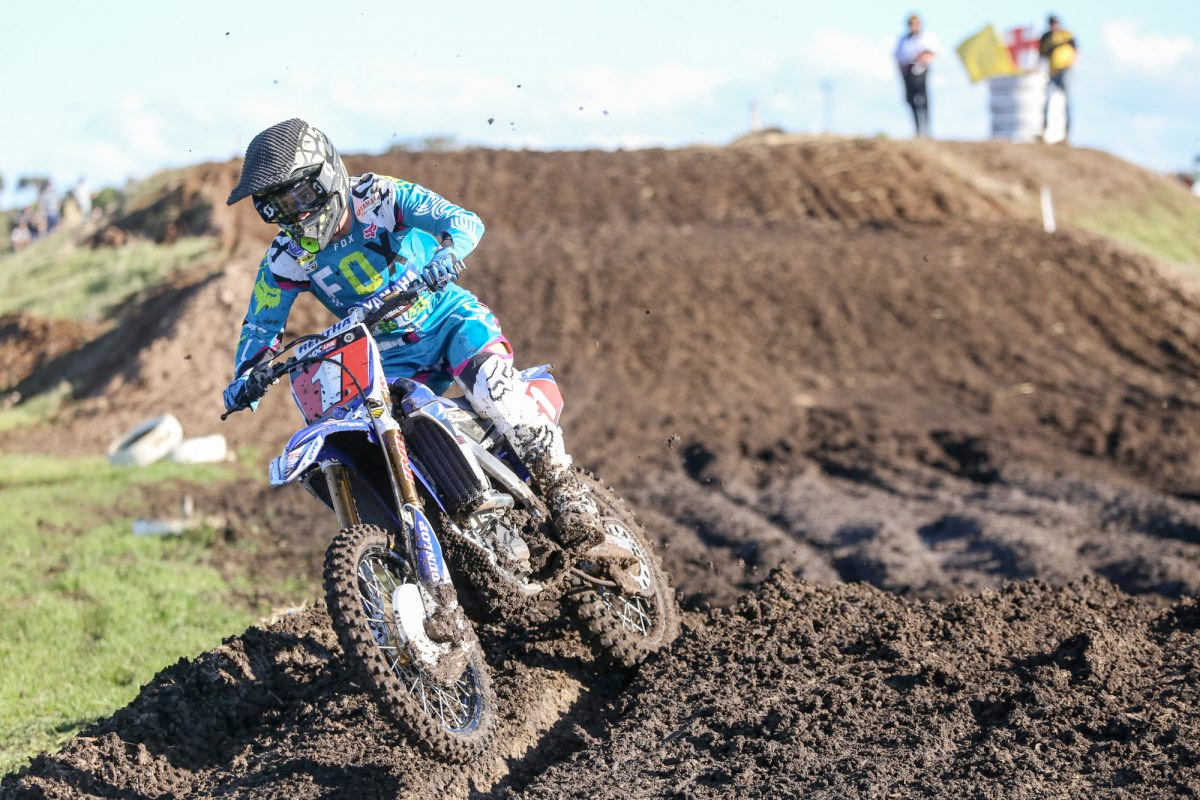 CDR Yamaha‰Ûªs Dean Ferris took his fourth consecutive Thor MX1 overall victory at Horsham thanks to another flawless score card across two motos, at what was a challenging fourth instalment of the Motul MX Nationals today.

In the two days prior to todays event, heavy rain blanketed the Western Victorian venue, but the sun came out when it mattered and when the gates opened at Horsham, spectators and fans we treated to ideal weather conditions and a technically demanding track, which Ferris relished in.

When riders in the premier Thor MX1 class headed out for their practice and qualifying sessions this morning, riders were forced to take on their first muddy track of the season. With the conditions proving difficult, most opted to put down minimum laps, and it was KTM‰Ûªs Kirk Gibbs who was fastest of the session on only his first lap (2:17.125).

It was once again no surprise the CDR Yamaha‰Ûªs Ferris was well within the top times recording a 2:18.187 lap time which ensured he was second quickest, while DPH Motorsport‰Ûªs Kade Mosig found his speed late in the session placing him in third (2:18.221). Crankt Protein Honda Racing‰Ûªs Todd Waters and MEGA Bulk Fuels Monster Energy Kawasaki‰Ûªs Aleksandr Tonkov were the final two riders to progress through to GoPro Superpole.

But for the first time this season it wasn‰Ûªt Ferris who collected the GoPro Superpole victory. Waters managed a lightening fast 2:10.510 hot lap time, awarding him his first GoPro win of 2017, three championship points, and first pick of the MX1 grid.

With the Horsham track claiming a number of machines in other categories by the time the Thor MX1 class lined up for their first moto this morning, thousands of spectators watched on eager to witness the premier class take on the gruelling track conditions.

When the gate dropped and riders headed in to the first turn, it was an all out battle for the holeshot, but once again it was CDR Yamaha‰Ûªs Ferris who wasted no time securing the Raceline holeshot and from there he moved in to a familiar position ‰ÛÒ the race lead.

With a clear track ahead of him Ferris took full advantage of the first lap, stretching his lead out to an impressive nine seconds. Slotting in to second place behind him was KTM Motocross Racing Team‰Ûªs Luke Styke, followed by MX1 rookie Luke Clout in third.

Despite securing his first GoPro Superpole win this morning, Waters was back in tenth place after one lap, and on a mission to make up time due to a first turn crash.

By the time riders headed into lap three, Clout had gotten by the far more experienced Styke, and was looking ultra comfortable in second position. Behind the top three DPH Motorsport‰Ûªs Mosig was in fourth, followed by fastest qualifier Gibbs who was circulating with the absence of goggles.

As race one progressed, Ferris began to come under fire from second placed Clout, who had gradually made up ground on the CDR Yamaha machine, but as soon as Ferris felt the pressure he accelerated away, dashing any hopes of a battle for the lead.

Meanwhile, despite riding without the protection of goggles, Gibbs was in no way deterred, and by the time riders reached the six lap mark, the KTM rider had made the pass on Mosig for fourth, where he began to eye off his teammate Styke.

Another rider who was capturing the attention of the crowd with his charge through the pack was Waters ‰ÛÒ the Crankt Protein Honda Racing Team rider had managed to make his way from tenth to sixth by the halfway mark in the moto.

With 20 minutes run, Ferris was four seconds a lap faster than any other rider on track, showcasing his undeniable consistency and skill aboard his CDR Yamaha machine.

And it was in the top spot that Ferris remained for the duration of the 30 minutes, crossing the finish line to collect his sixth moto win in race one at Horsham. Crankt Protein Honda Racing Team rider Clout finished in second, recording his best result of the season, while Styke also managed his best race finish so far in 2017, coming home in third.

In the second moto for the Thor MX1 class, competitors were welcomed to drier track conditions, and it was Crankt Protein Honda Racing Team‰Ûªs rookie Clout and Ferris who were neck and neck off the start, but in what seems to be the theme this year, it took less than a lap for Ferris to find his way into the lead position.

Behind Ferris and Clout, was once again KTM Motocross Racing Team‰Ûªs Styke in third, while MEGA Bulk Fuels Monster Energy Kawasaki‰Ûªs Tonkov got to a solid start finding himself in fourth.

With the track far more technical in the second moto, Ferris‰Ûª showed off his confidence and ability, and by the three-lap mark was more than five seconds a lap quicker than his competitors. Clout, who is only in his first year in the MX1 class, continued in second position, while Styke began to come under fire his team mate Gibbs in what was shaping up to be an exciting battle for third.

With Gibbs desperate for championship points, it wasn‰Ûªt long before the KTM rider made the move on Styke, while Wilson Coolair Motul Factory Suzuki‰Ûªs Peters passed Waters for fifth on the very same lap.

By the half way point in race two, it became clear that Ferris was on another level, continuing to lead by a huge margin from Clout and Gibbs in second and third positons. Peters made his way up to fourth, followed by Waters and Styke who unfortunately had slipped back to sixth position.

With nine laps in the books, Clout began to feel the pressure from Gibbs who was navigating his way through the field, testing the young rider‰Ûªs ability ‰ÛÒ but just as the fight for the position was heating up, Clout‰Ûªs bike let out a plume of smoke, and only seconds later the young Honda rider was pushing his bike back to the pits, dashing any hopes of a podium.

With Clout out of the picture, his teammate Waters inherited third place, while Peters followed suit slotting up to fourth.

With only a lap remaining, Ferris was simply unstoppable ‰ÛÒ the margin to second placed Gibbs growing greater with every turn, and with both Gibbs and Waters behind him with their goggles around their arms, the CDR Yamaha rider was under minimal threat.

So when the chequered flag flew for the final time at Horsham today, it was no surprise to see Ferris once again finish victorious. Second in moto two was taken by KTM‰Ûªs Gibbs, while Waters managed to hold on for third. Styke and Peters wrapped up race two in fourth and fifth places respectively, while Harwood, Mosig, Tonkov, Davis and Joel Green completed the top ten in race two.

However, the man of the moment was Ferris at the conclusion of racing today, his 1,1 race finishes rewarding him with his fourth consecutive round win at Horsham. Second on the podium was secured by Gibbs, while teammate Styke completed the Thor MX1 podium.

‰ÛÏThe track was tough at Horsham, today was one of those days where you had to be smart and I‰Ûªm glad that we were able to maximise our points, Ferris said. ‰ÛÏIt was all about getting a good start, and I got two holeshots ‰ÛÒ I‰Ûªm not sure if I‰Ûªve done that before but it really counted here.

‰ÛÏThe team and I, we have made really good decisions at the right moments and that‰Ûªs paying off ‰ÛÒ that‰Ûªs what‰Ûªs making the difference at the moment.

‰ÛÏYou have to be the whole package ‰ÛÒ we‰Ûªre four rounds in and I‰Ûªm glad that I was able to rise to the occasion today. It‰Ûªs what you need to do and overall I‰Ûªm really happy.‰Û