A blistering performance from Joan Barreda has seen the Monster Energy Honda Team rider catapulted into the lead of the 2018 Dakar at the conclusion of stage two as the race moved on from Pisco.

A rough offroad ride and sand dunes were the order of the day for stage two of the 2018 Dakar Rally. The course featured a total of 279 kilometres with 95% of the distance against the clock. The stage was something of an anomaly given that the cars got to start out before the bikes, leaving riders to deal with heavily churned up sand after their four-wheeled counter parts had roared through.

The initial section of the 277-kilometre stage around the outskirts of Ica and Paracas, required some skillful navigation in soft yet physically demanding dunes, complicated further by the altitude. 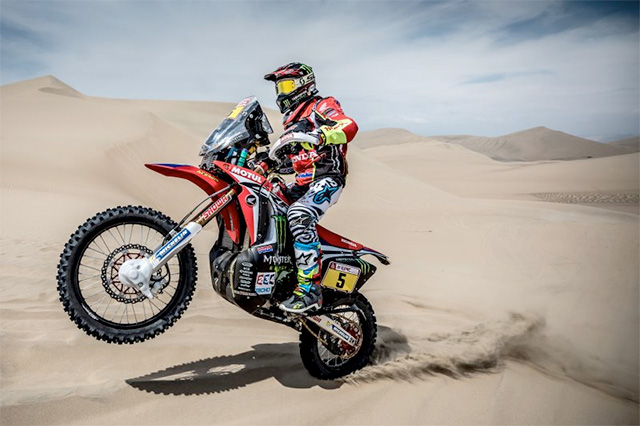 Joan Barreda took a strong swcond stage win to take the overall lead
Joan Barreda gave a master class in speed with a commanding performance in the special stage. The Spaniard completed the course in 2 h 56‰Ûª 44‰Û 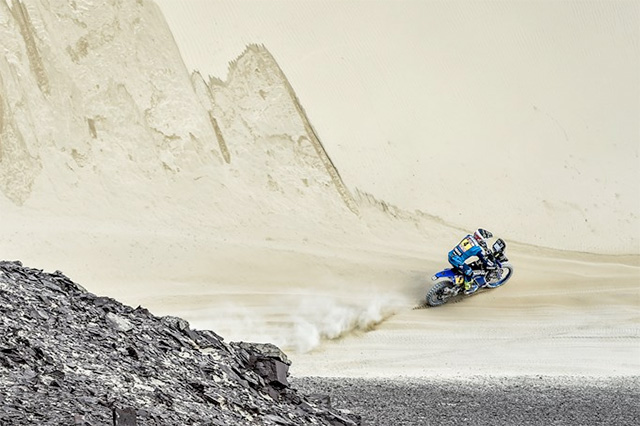 "We got the first difficult stage out of the way with a good result," Van Beveren said. "For me today wasn't a day that I wanted to push hard. We all knew navigation would be tricky so my goal was to find the right balance between going fast and not making any mistakes. I'm happy it all went well and I could secure second again today. Starting behind the cars today we were faced with difficult track conditions and many, many stones. Despite that, it was easy for me to get a good race pace today and this is really encouraging for the days to come. I want to keep this same feeling for the rest of the race as I believe this is the key to success in the Dakar." 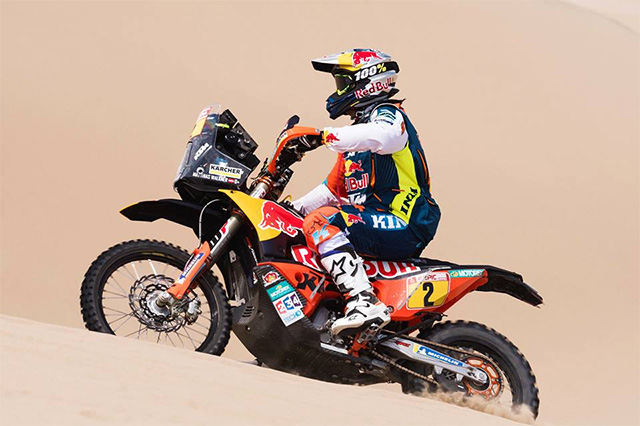 Red Bull KTM Factory Racing's Matthias Walkner improved to third place on stage 2.
Improving on his sixth-place result from day one, Red Bull KTM Factory Racing's Matthias Walkner rode well in the heat of the desert. The Austrian moved through the field as the stage progressed to finish in third place, less than two minutes behind second-placed Adrien van Beveren. Walkner was pleased with his result and hopes to carry his pace into tomorrow‰Ûªs longer stage.

"Conditions were tough out there today," Walkner said. "Following the cars made navigation a little easier but the stage was quite bumpy with all the tracks left by the vehicles in front. Personally, I‰Ûªm feeling well, but I know we have a long way to go and things are only going to get harder. I know from experience that the race isn‰Ûªt won on these first few days, in fact there are about 15 guys who are riding well and up near the front. I‰Ûªll keep on riding consistently, see how the next few stages go and aim to get to the rest day in a good position.‰Û 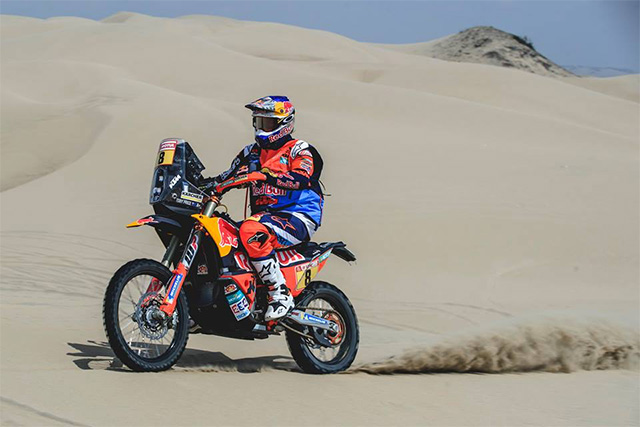 Toby Price was the best of the Aussies with 10th on the second stage and now sits tenth overall.
Toby Price was the best of the Australian's and continues to get himself dialed in, both to his new KTM 450 RALLY and to competition in general. The Australian increased his pace as the day went on and moved up from his start position of 14th to 10th at the end of the stage and now holds the same position overall.

"It was the first stage with proper navigation today and I did ok," Price declared. "The cars ahead of us were everywhere ‰ÛÒ I think their numbers must have been halved after today, there were so many of them side-lined. I managed to catch Laia quite early on, around the 40 or 50km mark, and we rode together for a while. Overall, I am feeling good and inside the top-10 is not a bad place to be. I just need to concentrate on my riding, navigation and hopefully I can pick up the pace a little as the race progresses.‰Û