Honda TT Legends out in force at Bol d’Or test 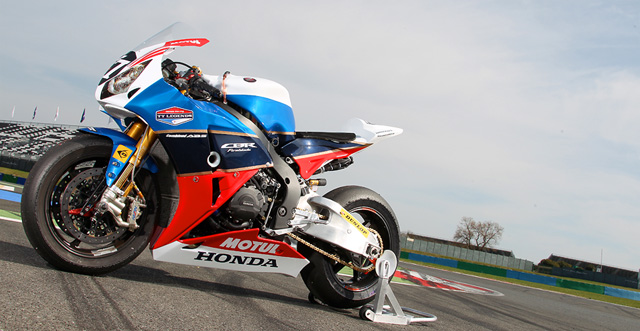 The Honda TT Legends team has completed the 2012 Endurance World Championship pre-season test at Magny Cours, with all four riders in the new line-up together for the first time.

John McGuinness, Cameron Donald, Simon Andrews and Gary Johnson all took part in the two-day test in preparation for the first race of the year ‰ÛÒ the Bol d'Or 24-hour ‰ÛÒ which will take place at the same circuit on 14/15 April.

Following a busy winter of development on the 2012-spec Honda Fireblade, the team took the opportunity to run-in the new components on the bike and bring the riders up to pace on a race set-up.

For McGuinness, Donald and Andrews, the test was a chance to get reacquainted with the French circuit, while Johnson tackled the 4.4km track for the first time.

The cooler mornings at Magny Cours also allowed the team to test cold tyre compounds in preparation for the overnight section of the Bol d'Or, where temperatures can drop to below 5å¼c. The final afternoon saw the four riders complete a successful race simulation. The Honda TT Legends will be back in France in just three weeks to tackle the race for real at Bol d'Or 24-hour.

John McGuinness in action
Race Manager , Russell Benney, said, "We had five or six elements developed during the off-season that needed more miles and this test has allowed us to see how these will perform. We also wanted to get the riders up to race pace based on 2011's lap times and work on various other elements on the bike, such as the suspension and geometry, so that we are ready to go at the race meeting without making too many changes. To that extent, we have achieved what we came here to do so we're happy."

John McGuinness added, "It's been good to get back together with everybody. It's been a couple of days of team bonding as well getting on the bike. There have been a few positive changes since last year's Bol d'Or and we're heading in the right direction. All four of us have done plenty of laps. Last year I was a bit nervous coming to this meeting, I didn't know the track and I'd never done a 24-hour before but I've got a year under my belt now and it all feels like the norm. We'll be back here in a couple of weeks for the race and hopefully we'll be on it."

Aussie Cameron Donald was back on board after missing the last test with injury, "It's great to be back with the team and get back to work after a long off season. It really feels like a family now and we're all optimistic about the season ahead. We couldn't have asked for a better first test, the sun is shining at a track we're familiar with and we're moving forward. I'm excited about the race in three weeks time.