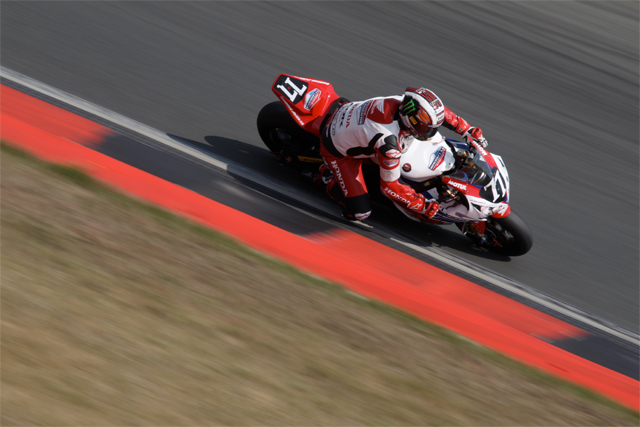 The 2013 FIM Endurance World Championship will draw to a close this weekend with one final epic battle ‰ÛÒ the ‰Û÷24 Heures Moto‰Ûª at Le Mans ‰ÛÒ and after a testing season, the Honda TT Legends team is determined to end the year on a high.

A four-strong squad of John McGuinness, Michael Rutter, Simon Andrews and Michael Dunlop are all in attendance at the French circuit, with the three-man race line-up due to be decided post-qualifying.

This will be McGuinness‰Ûªs third time at the legendary race with the Honda TT Legends, so the 20-times Isle of Man TT winner is more than familiar with the 4.185km circuit. Andrews has tested at the track twice in the past but never competed in the race, while Rutter and Dunlop will be making their Le Mans debut.

"There‰Ûªs no denying that it‰Ûªs been a tough season for us, but the aim this week is to put all that behind us and move on to end the year with a good result." McGuinness stated. "At this stage last year we were in a great position, second in the standings and we had it all to play for.

"We‰Ûªre no worse a team this year, in fact if anything we‰Ûªre stronger, so there‰Ûªs no reason why we can‰Ûªt pull a result out of the bag.

"There‰Ûªs a really positive feeling in the team and we‰Ûªll be pushing as hard as we can to make that happen," he concluded.

The team will take part in two two-hour testing sessions today, giving all four riders a chance to get to grips with the circuit ahead of qualifying on Thursday and Friday and the 24-hour race itself, which will begin at 3pm CET on Saturday 21 September.