Honda Take Positives From Barcelona Hit Out Despite Some Difficulties 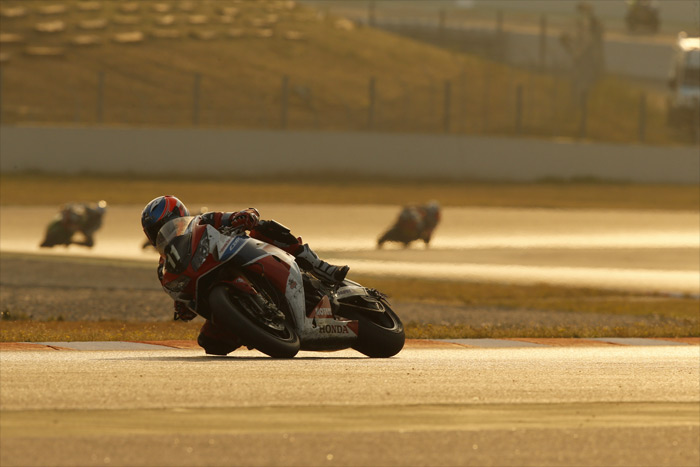 The Honda Endurance Racing team celebrates its 24 Hours of Catalunya podium after leading at the Circuit de Barcelona-Catalunya for most of the race.

After 24 hours of effort and tough racing with hot temperatures at the Circuit de Barcelona-Catalunya, Honda Endurance Racing crossed the finish line in second position with a 9-lap gap.

The 24 Hours of Catalunya that were seen as a pre-Suzuka test for the team went well as Honda‰Ûªs endurance specialists Julien Da Costa, Freddy Foray and SÌ©bastien Gimbert managed to get the Honda CBR1000RR Fireblade SP on the second step of the podium.

The team was leading the race for long hours until a little technical issue kept the CBR in the garage for a longer pit stop than expected in the early morning. When SÌ©bastien Gimbert went back on track after twenty minutes working on the bike, the team was down in second position with a 10-lap gap to catch up.

Honda‰Ûªs endurance rider SÌ©bastien Gimbert pushed hard to try to close the gap and even scored the fastest lap on track with a 1‰Ûª48.515 lap time. But despite all the riders‰Ûª efforts, the team was unable to catch up with the leading team.

This 24-hour test race still offered the riders plenty of valuable track time and the data collected from this race will be of a great value for the team‰Ûªs strategy for the rest of the season.

"It‰Ûªs been another difficult race for our team, but we‰Ûªre very pleased to finish." Team Manager Neil Tuxworth commented. "We mainly used this race as a test, not as a race, we have many new items on the bike we wanted to try and also we are very pleased the bike has successfully finished.

"We did lose twenty minutes during the race with an unfortunate problem with our clutch, but that certainly wasn‰Ûªt one of the parts we were testing. All the other items that we have built and made for Suzuka worked very well and also, because of the hot weather here it has been an exceptionally good test for the riders for the humidity and the heat before we go off to Japan.

"So all in all, I think it‰Ûªs been a very successful event for our team."

This positive result allows the Honda Endurance Racing team to confirm that the technical changes that were made on the bike since the Le Mans race were good and to gain a lot of confidence ahead of the Suzuka 8 Hours that takes place in two weeks time on 26 July.