Honda Legends Back at the Island for MotoGp Ride Day 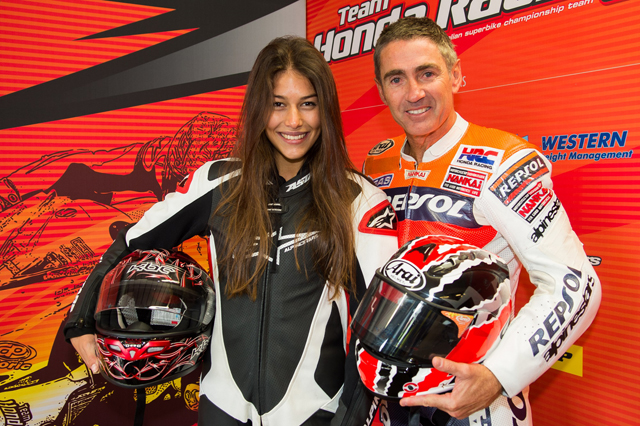 Taking celebrity guests on two-seater rides at lightning speeds around the Phillip Island Grand Prix Circuit, Mick Doohan and Daryl Beattie, who were team mates in the 1993 MotoGP Honda factory team, took to the circuit with ease.

The event marked six weeks to go until the 2013 Tissot Australian Motorcycle Grand Prix which will descend on Phillip Island on October 18-20, 2013. Australian MotoGP Ambassador Helena Vestergaard was joined by a raft of Australian celebrities.

Team Honda Racing was the back bone of the event providing two Honda CBR1000RRs that have been modified to be used as a two-seater machine, with an array of specification changes, these motorcycles offer an experience second to none.

Speaking after the event, Honda Motorcycles National Marketing and Racing Manager Glyn Griffiths was thrilled with the enthusiasm of participants.

‰ÛÏTo have Australia‰Ûªs world famous riders down at Phillip Island showing non-motorcyclists a glimpse of the thrill of racing is really great." Griffiths stated.

"For Honda, to see the excitement of people at the end of the ride is what it is all about, racing and Honda‰Ûªs history of racing is an important part of the company‰Ûªs make-up and this event combines it all perfectly," he added.

Mick Doohan is world renowned for achieving five 500cc MotoGP World Championships between 1994 and 1998. Having been awarded several honours in his career from Order of Australia in 1996, to being placed in the Australian Sports Hall of Fame three times, Doohan is one of Australia‰Ûªs most famous sportsmen.

Daryl Beattie‰Ûªs international career also spanned the 1990s and saw him race against riders like Mick Doohan and Wayne Gardner. In 1992 he won the Suzuka 8 Hour with Wayne Gardner, in 1993 achieved a promising third and 1995 a secure second in the 500cc Motorcycle Grand Prix.