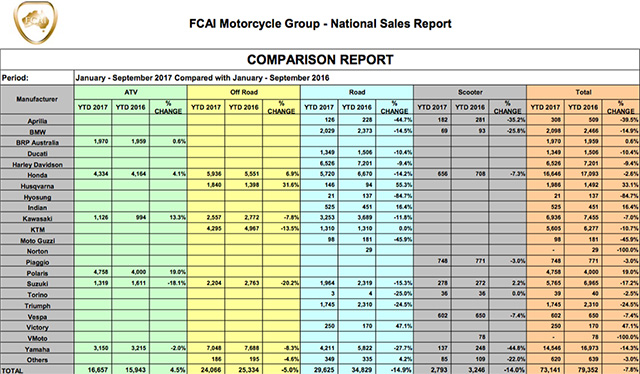 National motorcycle, ATV and SSV sales for the nine months to the end of September declined 7.8 per cent compared with the same period in 2016, according to the latest sales data published by the Federal Chamber of Automotive Industries.

Road bikes were again the highest volume segment, with 29,625 sales or 40.5 per cent of the total motorcycle market. This volume represents a decline of 14.9 per cent on road bike sales for the corresponding nine months of 2016. The market leader in road bikes was Harley-Davidson, followed by Honda and Yamaha.

Although coming off a low volume base, both Indian and Victory motorcycles posted strong increases during the period of 16.4 and 47.1 per cent respectively.

Off-road bikes represented 32.9 per cent (or 24,066 sales) of the total market during the nine months to the end of September, with this segment‰Ûªs sales down 5 per cent on the corresponding period in 2016. Yamaha led this segment ahead of Honda and KTM. A standout performer in the off-road segment was Husqvarna, which posted a 31.6 per cent increase.

The ATV and SSV segment grew by 4.5 per cent during the nine month period to snare a 22.8 per cent share (or 16,657 sales) of the total motorcycle market. Polaris led this segment followed by Honda and Yamaha.

The scooter segment again experienced a decline in sales, down 14 per cent on the first three quarters of 2016. Scooters represented just 3.8 per cent of total industry sales, or 2,793 units. Italian maker Piaggio was the segment‰Ûªs best seller, followed by Honda and Vespa.