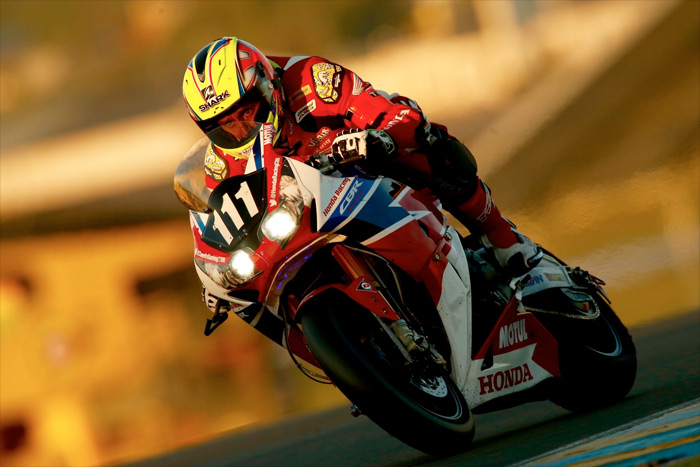 The Honda Endurance Racing Team is preparing for the real-life test that is the 24 Hours of Catalunya, which takes place at the Circuit de Barcelona-Catalunya in MontmelÌ_ on 11-12 July 2015.

Honda‰Ûªs endurance specialists Julien Da Costa, Freddy Foray and SÌ©bastien Gimbert will head to the Circuit de Barcelona-Catalunya with the Honda CBR1000RR Fireblade SP intent on validating the vast technical development work that has been completed since Le Mans, whilst laying the foundations for the Suzuka 8 Hours later this month.

The team has been working hard on continuing to develop the CBR1000RR Fireblade SP since its last competitive outing at the 24 Heures Moto Le Mans. Twenty-four hour races are the sternest test of both man and machine, pushing every element of both performance and endurance to the limit, but both bike and riders are prepared and relishing the challenge.

Julien Da Costa and Freddy Foray are looking forward to discover the MontmelÌ_ track for the very first time, while SÌ©bastien Gimbert will be back on a track that he knows well from the time he was racing in MotoGP.

"Last month Honda invited us to the Isle of Man TT where we went with Julien - it was a breath-taking experience, especially with John McGuinness‰Ûª victory in the Senior TT race - it was an amazing atmosphere." Foray commented.

"Now it‰Ûªs time to focus back on our season; the break was quite long and I cannot wait to be back on track in Barcelona and to discover the circuit. We are taking part in a 24-hour race which is quite challenging, especially because we don‰Ûªt know the track and we won‰Ûªt have much practice time, but we are really looking forward to discovering the track while racing!

Being the only official EWC team competing in this race, the spotlight will surely be on the Honda Endurance Racing team and its three riders, but it is a valuable opportunity for more endurance running and data collection ahead of the 38th ‰ÛÏCoca-Cola zero‰Û