Historic day for Bagnaia and Mahindra at The Cathedral 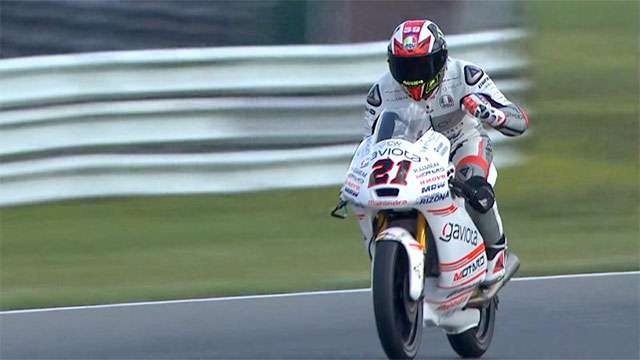 Rain stayed away but the Motul TT Assen was packed with action as Francesco Bagnaia took victory ahead of Fabio Migno and Andrea Di Giannantonio and in so doing gave Mahindra their first Moto3 win.

For the 800th time the lightweight class championship lined up on the grid, Enea Bastianini (Gresini Racing Moto3) on pole and looking to break the pole position curse. It was a historic day as the Moto3 World Championship race was also the first one to be held on a Sunday at Assen. The Motul TT Assen was declared dry, but dark clouds began to blot out the sun as the lights went out. Away they went, Bastianini and Andrea Migno (SKY Racing Team VR46) flying off the line.

Francesco Bagnaia (Aspar Mahindra Team Moto3) had a steady first lap and hit the lead on lap two, his Mahindra able to hold its own around the 18 fast and flowing corners of Assen. It was a cut and thrust battle for most of the 22 lap race, no one able to gain any sort of advantage. He timed his move to perfection, expertly navigating the final chicane to carry enough speed to take a photo finish victory. Not only was it his first win on the world stage, but also Mahindra's who have now broken Honda and KTM's domination of the lightweight class.

Having only scored his first points in Mugello, Fabio Di Giannantonio (Gresini Racing Moto3) continued to show the importance of confidence as the Italian was once more involved in the podium battle. There was little room for tactics, Di Giannantonio doing all he could to hang on until the last lap. In true Assen style it was all about the run through the chicane, his Honda pushing him to third, 0.021s off victory. After the race Migno was demoted to third, promoting Di Giannantonio to second.

On lap nine of the race Migno put in an aggressive move to lead the race, having spent the opening portion of the Motul TT Assen just outside the top three. Brad Binder attacked him but the Italian responded, able to hold his own against the championship leader. On the last lap he made an incredible move through Hoge Heide and the Ramshoek, coming from fifth to lead into the chicane. 0.018s separated him from his first win, making his podium debut with second. But after the race it was ruled that Migno had made an illegal overtake and was thus demoted to third. 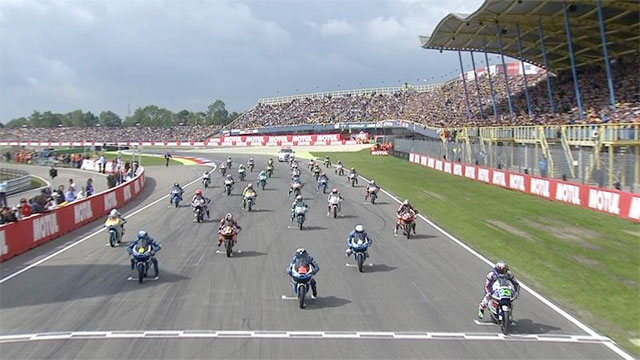 The Moto3 class leaes the line for a dry Assen race.
Despite a strong start to the race, Romano Fenati (SKY Racing Team VR46) was unable to make it happen on the last lap. The Italian was squeezed out coming into the final chicane and forced to settle for fourth, despite having led at multiple stages in the race. He‰Ûªs now 58-points back on Brad Binder (Red Bull KTM Ajo). Niccolo Antonelli (Ongetta-Rivacold) left his charge till late in the race, leading as the final lap began but like Fenati found himself unable to progress at the chicane. Fifth is his best result since Mugello.

Championship leader Binder was immediately in the front group. As is typical in the Moto3 class his lead wouldn‰Ûªt last and the South African was quickly pushed back to fourth. He seemed to be waiting for his chance to strike. But with seven laps to go he saved a near highside at Turn 15, forced to run across the gravel and grass. This dropped the South African to 13th, five seconds back on the front group. He went on to finish a distant 12th, but maintains the championship lead.

Last minute replacement Albert Arenas (Aspar Mahindra Team Moto3) was the first faller of the race, highsiding as he entered the chicane.

The second lap saw a nasty fall for Gabriel Rodrigo (RBA Racing Team), his KTM colliding with Fabio Quartararo (Leopard Racing) and taking them both down. Fortunately no one was seriously hurt, riders taking evasive action to avoid the fallen riders in the middle of the track.

Lap eight produced yet more drama as Aron Canet (Estrella Galicia 0,0) carried too much speed into the final chicane, forcing Bastianini wide but taking Juanfran Guevara (RBA Racing Team) out of the race. Both riders were able to walk away unharmed.

Alexis Masbou (Peugeot MC Saxoprint) and Tatsuki Suzuki (CIP-Unicom Starker) fell together at Turn 1 on lap 13, the Japanese rider clutching his wrist as he walked away.

Bastianini‰Ûªs race came to an abrupt end with four laps to go as he tried to force his way through a gap that didn‰Ûªt exist at Turn 10 on the inside of Bulega. He was frustrated but unharmed.