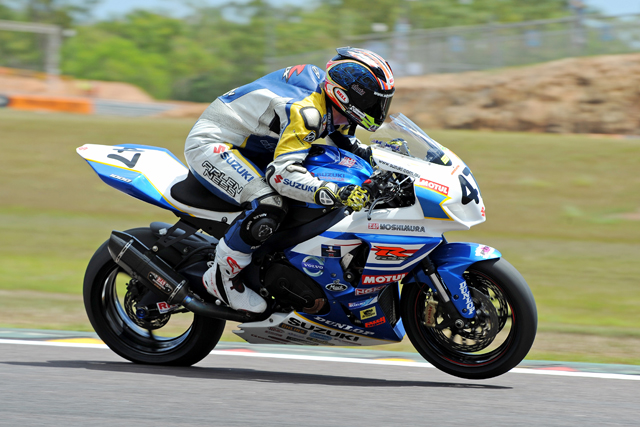 Team Suzuki‰Ûªs Wayne Maxwell and Robbie Bugden sit first and second in the 2013 Australian Superbike Championship with just one round remaining, following the penultimate weekend of competition at Hidden Valley Raceway in the Northern Territory on 13-15 September.

Maxwell was fastest in regular qualifying and stormed to Superpole on Saturday afternoon with a blistering new circuit best lap of 1:06.997s aboard the GSX-R1000, while Bugden slotted his GSX-R1000 into second.

Come Sunday Maxwell eased his way to a 1.697-second victory in the first 17-lap race of the weekend, while Bugden recovered from an early off-track excursion to finish a fighting fourth. The result marked Maxwell‰Ûªs fifth consecutive race win.

Race two was topped by Maxwell on track, however a 10-second jump start penalty demoted him to third behind eventual round winner Jamie Stauffer and Bugden, who led the race in its mid-stages.

It was another pivotal weekend for Maxwell in his quest for a maiden Australian Superbike Championship, stretching out a 31-point advantage over Bugden with just two races remaining in the season.

‰ÛÏThe conditions were very difficult and I‰Ûªd never won here at Hidden Valley, so that was the main focus,‰Û