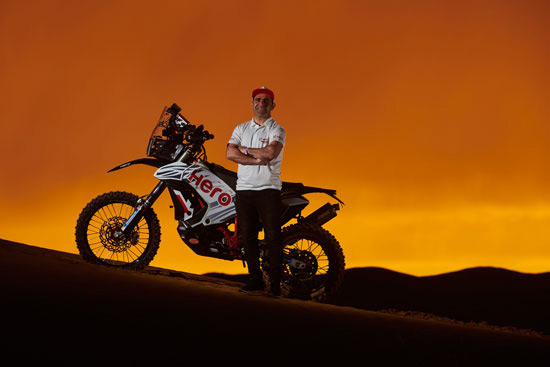 Close on the heels of achieving their first podium of the season, Hero MotoSports Team Rally, the motorsport team of the world‰Ûªs largest two-wheeler manufacturer, Hero MotoCorp Ltd., has further bolstered the Team‰Ûªs profile by signing the Portuguese champion, Paulo Goncalves as its fourth rider.

Paulo ‰Û÷Speedy‰Ûª Goncalves brings with him over 12 years of illustrious rally-racing experience, including a series of remarkable performances at the world‰Ûªs most prestigious rallies. He was crowned 2013 FIM Cross Country Rally World Champion. He also clinched the runners-up position at the world‰Ûªs toughest off-road challenge, the Dakar Rally in 2015.

Hero MotoSports Team Rally recently achieved an impressive podium finish at the 2019 Merzouga Rally in Morocco. Paulo‰Ûªs entry will add further impetus to Hero MotoSports‰Ûª campaign as the Team looks to improve on its already impressive results over the previous three years.

The multi-faceted rider, Paulo will compete alongside the Team‰Ûªs ace pilots -- the most experienced Indian Dakar participant, CS Santosh, Portuguese star Joaquim Rodrigues, and Spanish sensation, Oriol Mena. He will make his debut for the Team at the Silkway Rally (Russia-Mongolia-China) in the month of July this year.

‰ÛÏFirst of all I want to express my thanks to Hero MotoSports for showing their trust in me by letting me be a part of this amazing rally project," Goncalves expressed.

"I am very happy and excited to start this new journey with the team and I hope to contribute to the team's aim of improving our performance in the rally sport. From my side, I promise to give my everything to be ready and fit to be able to fight for the top positions for my team. Hero MotoSports has been doing a really good job in the last couple of seasons and this young team has shown, that it has the potential to win big. I would like to play my part in bringing these wins to the team. With lots of passion and emotions, my thanks again to the team and I am excited to begin.‰Û