Herlings and Prado On Top At Latvian Qualifing 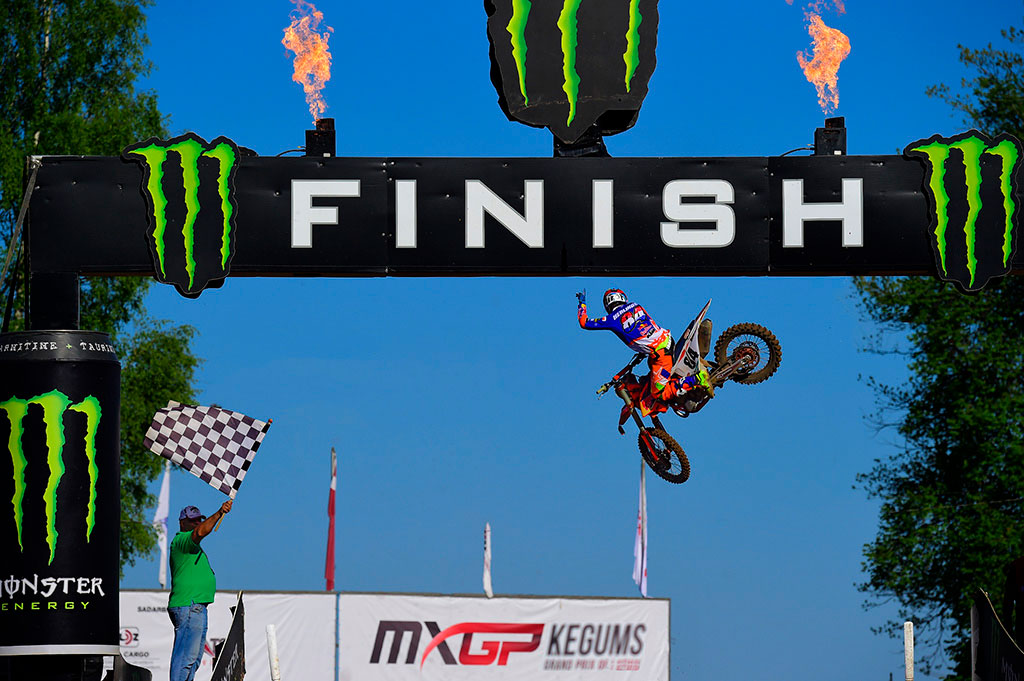 With a new track layout and new first turn today‰Ûªs races were action packed from the very start. The new and longer right hand first turn left riders banging bars for position as they relied on only their front brakes for stopping power.

MXGP‰Ûªs Saturday racing was full of impressive action, mostly from Jeffrey Herlings. Setting an unmatched pace in every session today Herlings left many wondering how. In Free Practice Herlings was 3 seconds a lap faster than the rest of the field and almost 2 seconds quicker in Time Practice.


At the start of Qualifying Herlings lined up in the furthest inside gate and charged into the first turn with the Holeshot, behind Clement Desalle and Monster Energy Yamaha Factory MXGP‰Ûªs Romain Febvre. 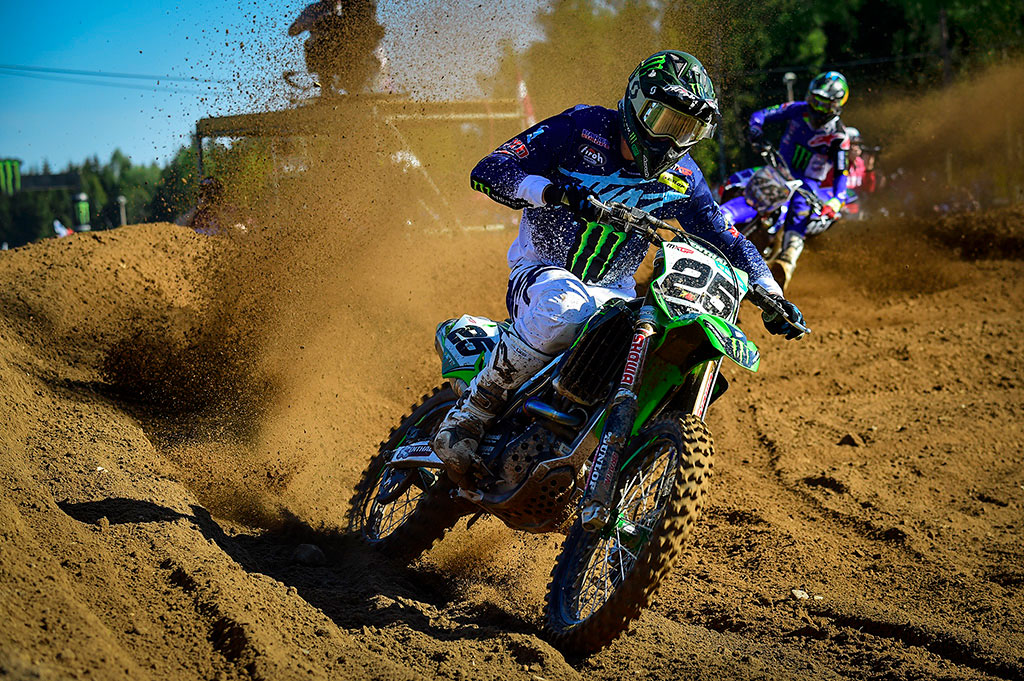 Clement Desalle kept hsi good form going in Latvia and will have second pick of the gate in MX1. Photo: Youthstream
Red Bull KTM Factory Racing‰Ûªs Glenn Coldenhoff was also riding well from the start fighting for 4th position. Team HRC‰Ûªs Tim Gajser who started outside the top five moved past Monster Energy Yamaha Factory MXGP‰Ûªs Jeremy Van Horebeek along with Coldenhoff by the end of the 6th lap.

Gajser‰Ûªs fill-in HRC teammate Todd Waters was running an impressive 8th and closing in on Wilvo Yamaha Official MXGP‰Ûªs Jeremy Sewer who ran 7th when a crash took Waters out of racing and left the Australian with a suspected fractured collar bone and the unlucky Team HRC again down to 1 MXGP rider.

Herlings gapped Desalle and Febvre as they battled over 2nd and Gajser ending up taking advantage catching the pair before passing Febvre for 3rd. Cairoli meanwhile was making impressive work of the field calmly passing his way up to 7th with 2 laps to go. 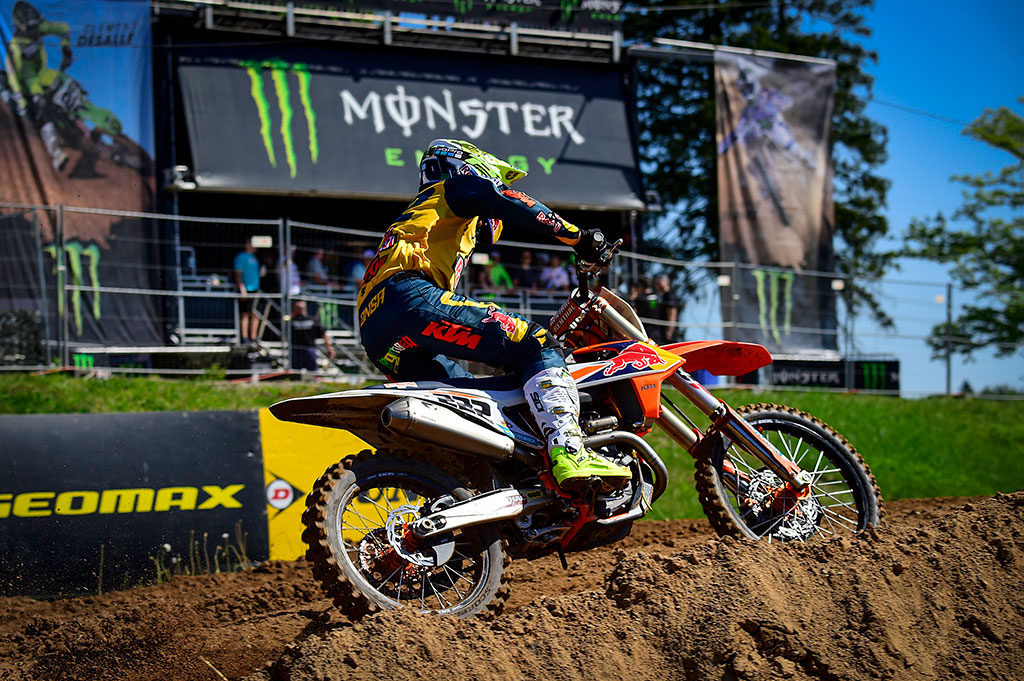 Antonio Cairoli finished on the podium and will be looking to stop the run of his team-mate Jeffery Herlings. Photo: Youthstream
On the penultimate lap Gajser crashed dropping him to 7th while Cairoli passed Coldenhoff for 5th and then both Monster Energy Yamaha Factory MXGP riders, Van Horebeek and Febvre on the last lap. Cairoli‰Ûªs amazing comeback to third place from well outside the top 20 was however overshadowed by the massive Herlings win where he was nearly 4 seconds a lap faster on average then 2nd place, finishing 50 seconds ahead of Desalle in 2nd.

‰ÛÏIt was a walk in the park today but it doesn‰Ûªt mean anything for tomorrow, it is a gnarly track and a lot of things can happen as you could see in the pile up on the first turn," Herlings said after the race. "I feel I am really one with the bike here on this track and my confidence is growing, I definitely had a good start, I had another Holeshot so that was pretty nice and I could just do my own thing.‰Û 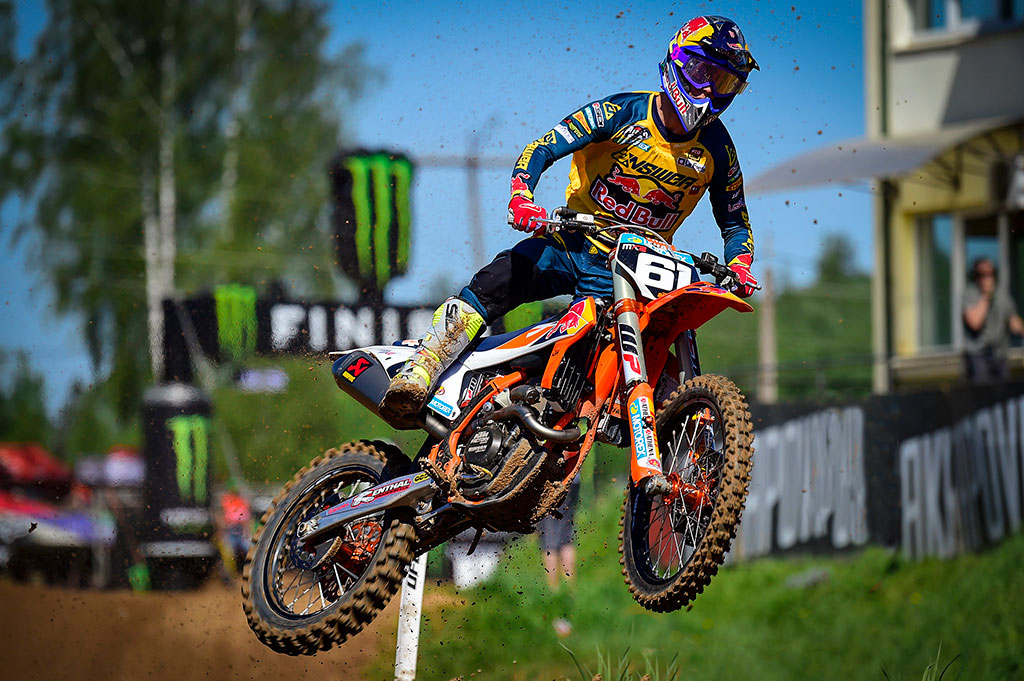 Jorge Prado kept KTM's perfect MX2 season intact with a win in the MX2 qualifying race. Photo: Youthstream
The MX2 class Qualifying Race was also a testament to the importance of a strong start on the Kegums circuit. Red Bull KTM Factory Racing‰Ûªs Pauls Jonass is the clear home fan favorite and rightfully so as the Latvian leads the MX2 Championship. However when the gate dropped it was Red Bull KTM Factory Racing‰Ûªs Jorge Prado who took the Holeshot and early lead.

Similar to the MXGP start, the MX2 riders tried to manage their way through the first turn without making mistakes, it was not the case however as Jonass went down along with Team HRC‰Ûªs Calvin Vlaanderen, F&H Racing Team‰Ûªs Jed Beaton, and last year‰Ûªs MXGP of Latvia‰Ûªs overall MX2 winner, Thomas Kjer Olsen.

Taking full advantage of the start was not only Prado, who created a gap which he maintained over all 12 laps, but Hitachi KTM UK‰Ûªs Conrad Mewse who was in second behind Prado the first 6 laps.

The first to pass Mewse was Kemea Yamaha Official MX2‰Ûªs Ben Watson. Watson, who just scored his career first podium in Russia, has now achieved his career‰Ûªs best Qualifying result. Following the moves of Watson and taking a position away from Mewse was Honda 114 Motorsport‰Ûªs Hunter Lawrence. Lawrence maintained 3rd position to the finish in a strong return from a hand injury which he suffered in Trentino‰Ûªs practice sessions. 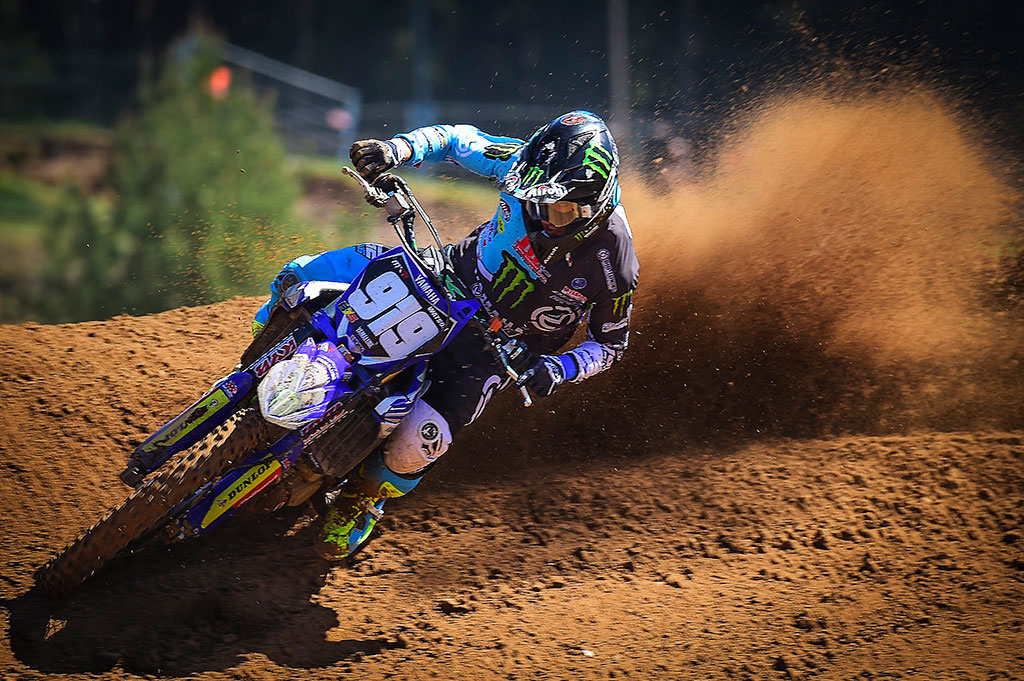 Brit Ben Watson continued his good form from Russia with a strong second in the MX2 class. Photo: Youthstream
Henry Jacobi also had a good qualifying race running third early before be passed by both Watson and Lawrence on the same lap. Jacobi ended up finishing in 6th just behind Kemea Yamaha Official MX2‰Ûªs Jago Geerts and ahead of Olsen who came back to 7th.

Pauls Jonass was only able to recover to 12th place and later stated: ‰ÛÏIt is always nice to race at home but for sure it is always a little extra pressure. I have been racing here already for 4 years in the GPs and every year on Saturday I struggle. Saturdays are not the best for me and this year it was the same, I crashed on the start and the first laps I actually rode ok but after I got tight and had a little arm pump but tomorrow is a new day, I‰Ûªm feeling positive for tomorrow.‰Û 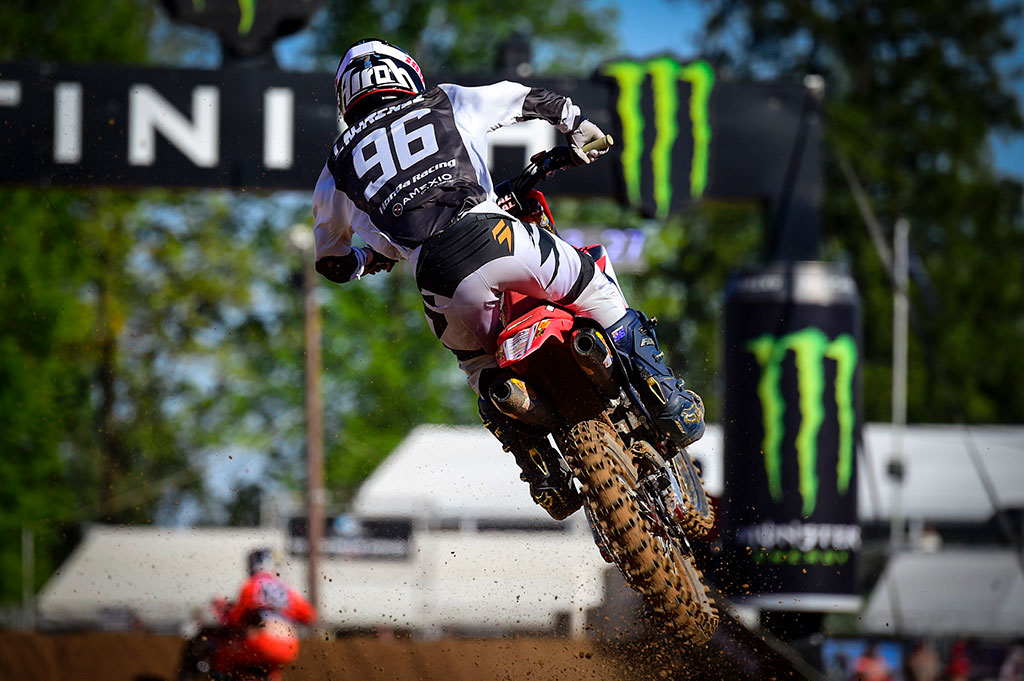