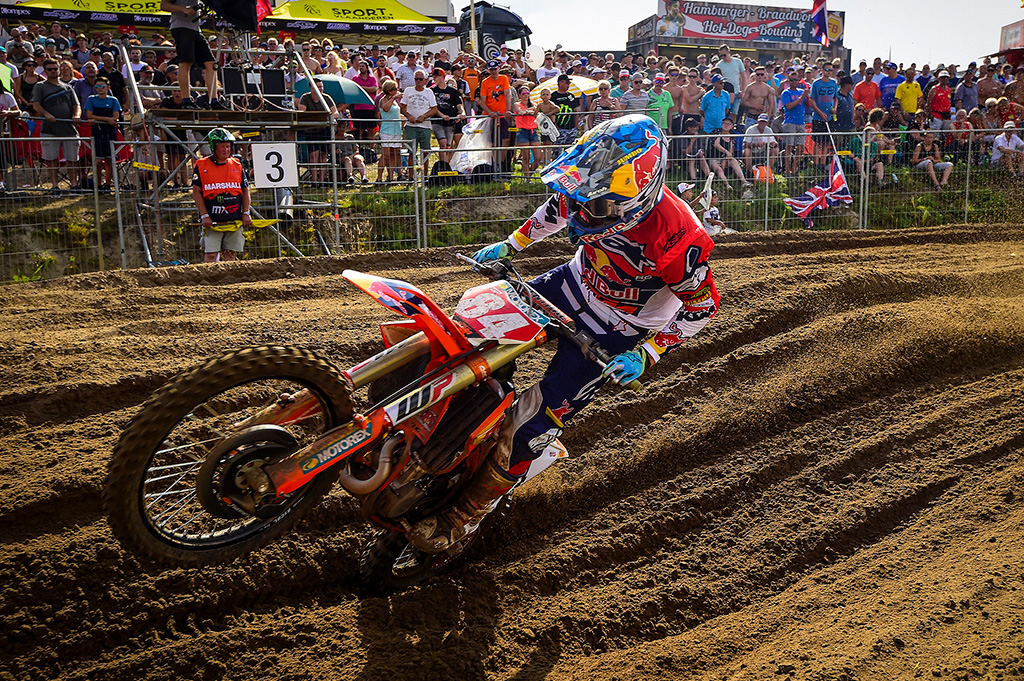 Known as one of the most brutal and challenging sand tracks on the planet, Lommel is also one of the riders‰Ûª favorites. What started as a smoothly sculpted surface quickly transformed into the typical Belgian sand track with massive ruts and ever changing lines. What was not typical for Belgium, however, was the weather with temperatures reaching the mid to upper 30‰Ûªs. Thousands of fans were onsite to witness the speed, skill, and fitness of the world‰Ûªs best riders and were on display today.


When the gate dropped on the MXGP Qualifying race it was Monster Energy Yamaha Factory MXGP‰Ûªs Romain Febvre that lead with Team HRC‰Ûªs Tim Gajser giving chase ahead of Herlings and Antonio Cairoli.

Herlings made it past Gajser in the first section as the Slovenian nearly jumped off the track. Febvre was also victim to the quick tenacity of Herlings as the Dutchman, dubbed the best sand rider in the world, squeezed his way by and into the lead. 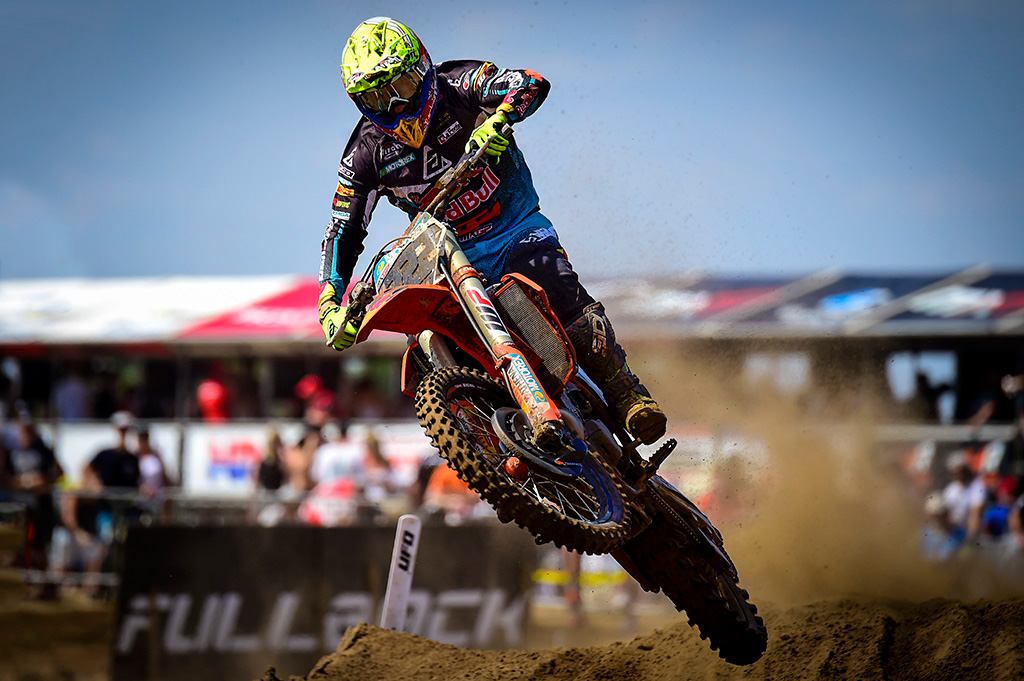 Antonio Cairoli
Gajser then dropped another position to Cairoli on the opening lap and then came under pressure from Brit Max Anstie in 5th. Anstie along with a handful of other riders took advantage of Gajser falling in a corner which dropped him to 10th behind Wilvo Yamaha Official MXGP‰Ûªs Shaun Simpson and ahead of the other Wilvo Yamaha of Jeremy Seewer.

Up to 5th was Monster Energy Yamaha Factory MXGP‰Ûªs Jeremy Van Horebeek with fellow Belgian Kevin Strijbos just behind in 6th. Clement Desalle and Julien Lieber ran 8th and 18th before Desalle fell to 11th and Lieber 33rd. Desalle lost 2 more positions before the finish to take 13th while Lieber got up 25th but then had to push his bike across the finish line for 29th. 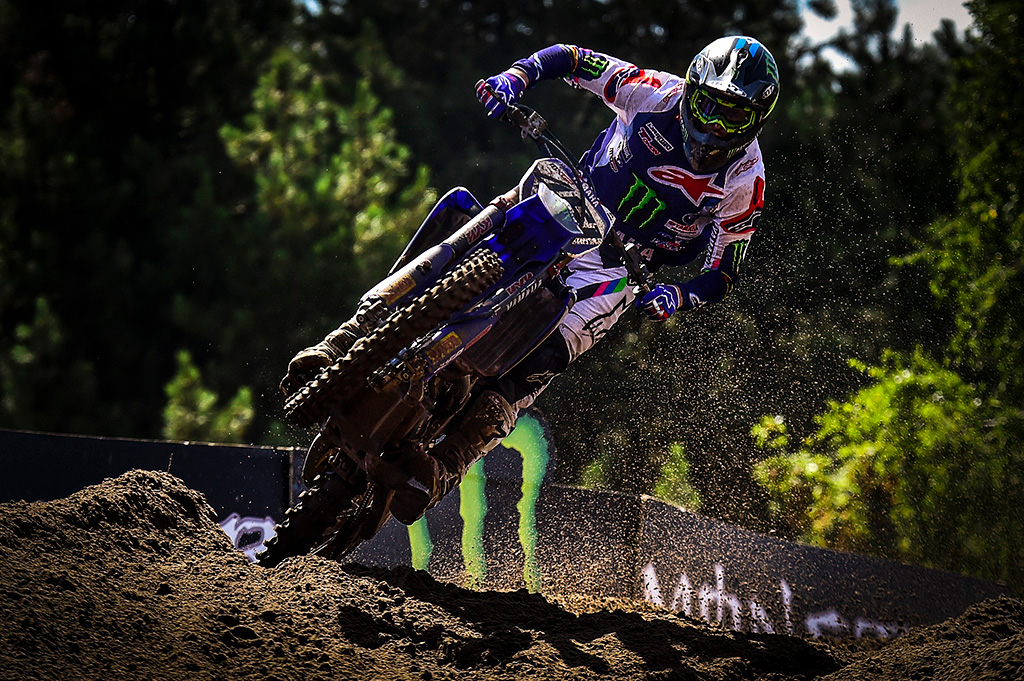 Yamaha's Romain Febvre was third in MXGP. Photo: Youthstream
Herlings‰Ûª race was however uneventful as he led every lap recorded, controlled his gap over Febvre and took the race win by nearly 16 seconds. On the final lap Cairoli closed the previous gap to Febvre and spooked the Frenchman into a mistake which gave the #222 second.‰Ûª

Once Cairoli had made his move Febvre played it smart and cruised to a 3rd place with Anstie 4th, Strijbos 5th, Van Horebeek 6th, and Glenn Coldenhoff taking 7th after being as far back as 12th earlier in the race.

‰ÛÏI definitely love coming here... last year we were here and we won, this year we are here so I want to repeat it and come out with a win, it would be nice, it would be good for the championship," Herlings said. "There is 6 rounds to go in less than 2 months but many things can still happen. Our plan for tomorrow is to get two good starts, try to fight for victory but it won't be easy, the competition is strong."

Todd Waters had a difficult time in getting up to speed as he battled around the top-20 positions for almost the entire race, before crossing the line twenty-second. 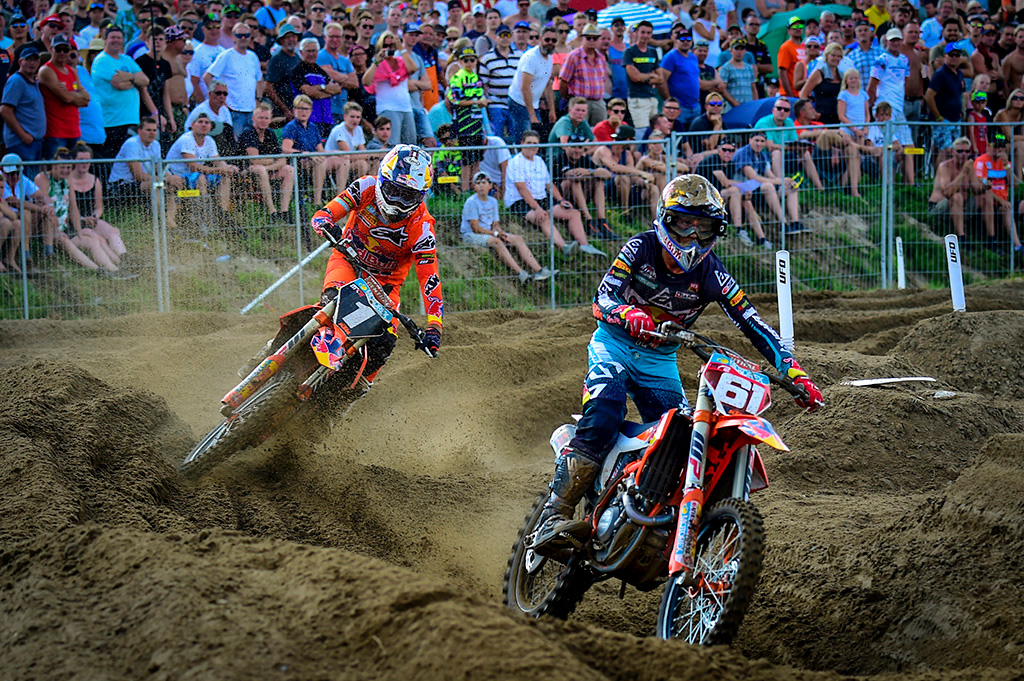 The start also saw Yamaha SM Action MC Migliori‰Ûªs Simone Furlotti crash with the first turn claiming others such as Honda 114 Motorsports Hunter Lawrence. Making an impressive start was Conrad Mewse in 4th. Covington made a move to split Prado and Jonass but Jonass responded with an even more daring move around the outside of Covington to reclaim 2nd.

Mewse was next to make a pass on Covington when the American made a mistake exiting the turn prior to Pit Lane. Covington then had Thomas Kjer Olsen behind him with Yamaha SM Action MC Migliori‰Ûªs Michele Cervellin in 6th and Team HRC‰Ûªs Calvin Vlaanderen 7th. 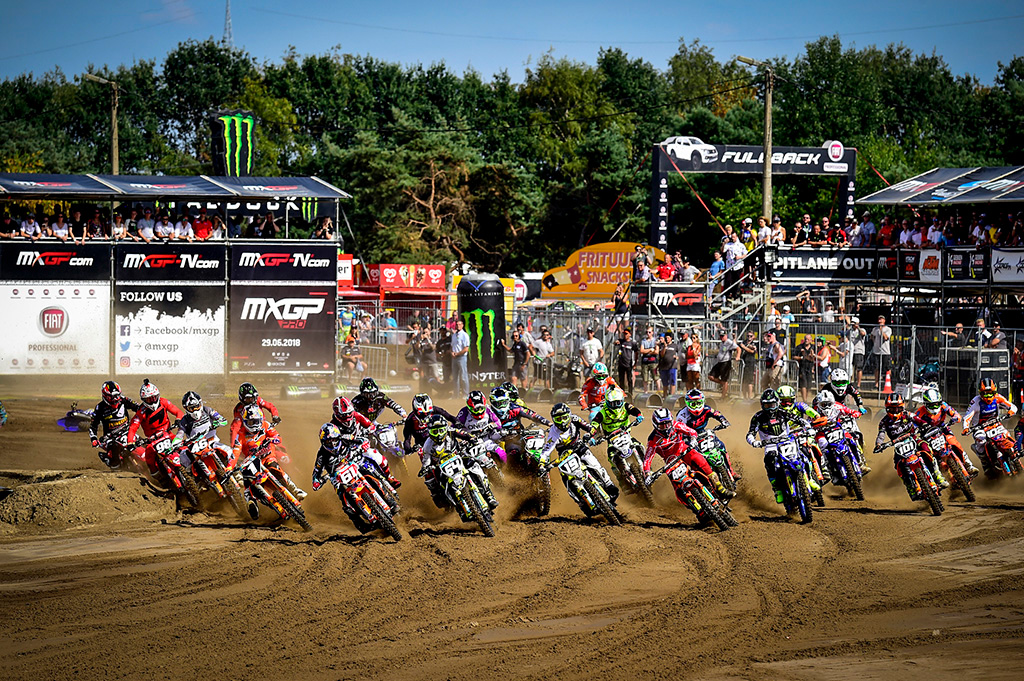 The MX2 field head into battle in over 30 degree temperatures. Photo: Youthstream
Vlaanderen made a pass on Cervellin to take 6th and shortly after F&H Racing Team‰Ûªs Adam Sterry took 7th from the Italian. Meanwhile Jonass made a pass on Prado to take the lead and quickly created a small gap. Covington fought to take 3rd back from a resilient Mewse and eventual was successful but not before his teammate Olsen fell out of 5th.

Kemea Yamaha Official MX2‰Ûªs Belgian rider, Jago Geerts, charged up to 7th after a bad start while Prado closed the gap of Jonass and retook the lead down the start straight. For the remaining 2 laps Prado held on to the lead with Jonass 2nd, Covington 3rd, Mewse 4th, and Vlaanderen 5th.

‰ÛÏI think I had a pretty good qualifying race, I took a good start and then tried to figure out where to improve and with 3 laps to go I could make the pass and take the qualifying race win so I'm really happy but the main race is still tomorrow so we will see how it goes," Prado said.

Australian Hunter Lawrence finished 17th after being taken out in a big first corner crash. 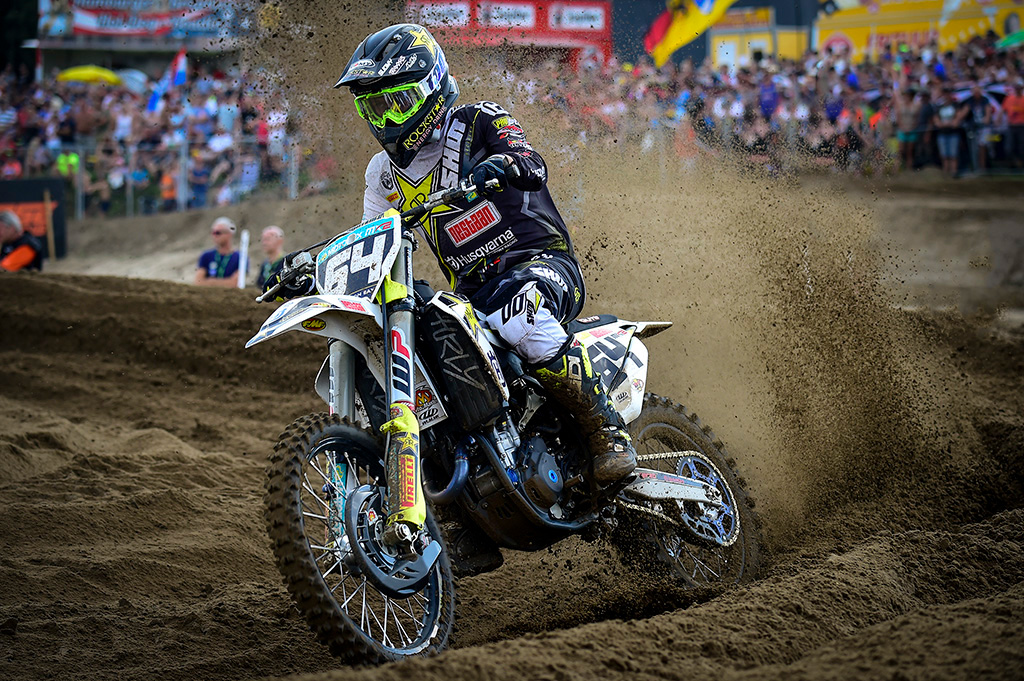