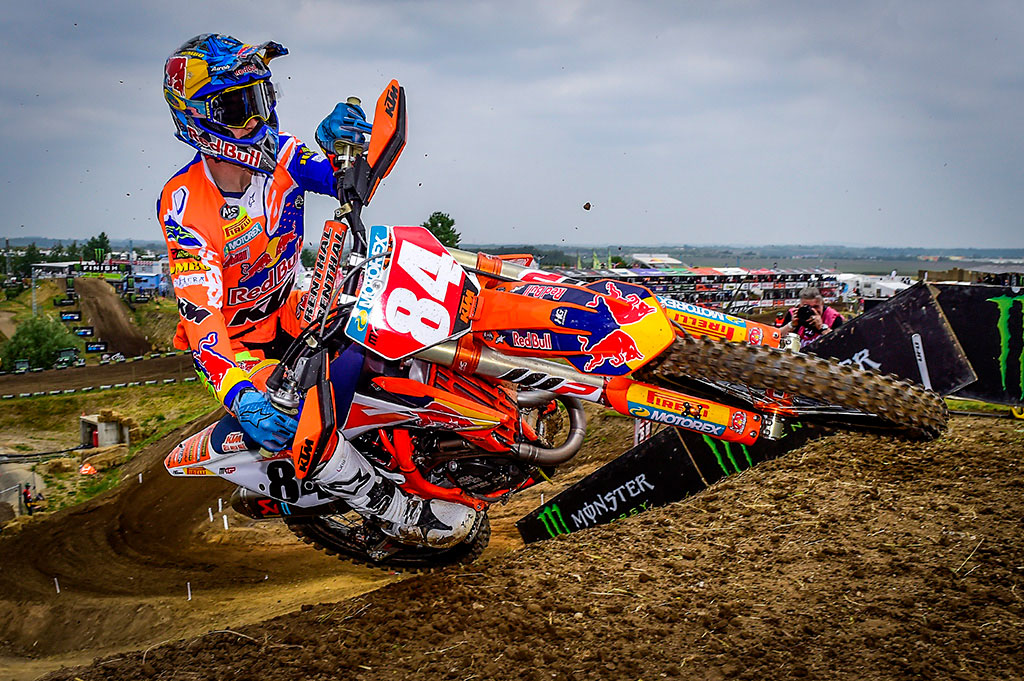 MXGP Championship leader Jeffery Herlings will once again start from pole after dominating MXGP qualifying. Photo: Youthstream
The 2018 MXGP of Germany has gotten underway on the hills of Teutschenthal! Continuing to add on to their recent success was Red Bull KTM Factory Racing‰Ûªs Jeffrey Herlings and Jorge Prado as they won their respective qualifying races.

There was plenty of action behind the pair of winners however with bar banging battles and even a mechanical mishap for Red Bull KTM Factory Racing‰Ûªs Antonio Cairoli! The longtime motocross track held all the racing in front of the vocal German MXGP fans with great weather.


Jeffrey Herlings has been impressive to say the least this season and today the Dutch sensation put in another strong ride. Herlings led from the first corner after drag racing down the long Teutschenthal start and beating out Frenchman Gautier Paulin.

A strong start also helped Gebben Van Venrooy and Alessandro Lupino to battle inside the top ten. Lupino was running in 7th just behind Febvre on the opening laps but soon come under pressure from Julien Lieber. Lieber made a pass just before the pair returned to the start straight and Lupino then tried to retaliate by jumping long to the inside but Lieber was unaffected by the move. Next to get by the Italian was Wilvo Yamaha Official MXGP‰Ûªs Jeremy Seewer. Seewer, who won the MX2 overall here last year continued his charge forward also passing Lieber. 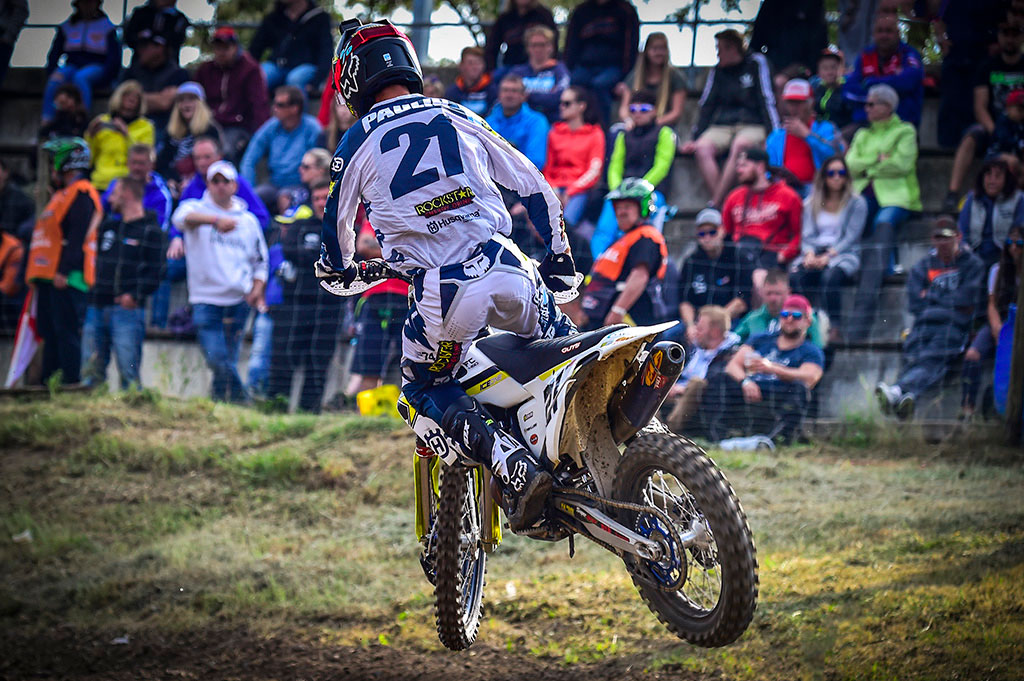 Frenchman Gautier Paulin finished in second, 5 seconds back from Herlings. Photo: Youthstream
Back at the front of the field Cairoli was applying pressure to Paulin but then had a bike issue. The mishap forced Cairoli to stop and fix the front end of his machine before continuing. While the defending MXGP Champion was stopped, Gajser, Van Horebeek, Febvre, and Seewer all made it past. With only 3 laps remaining Cairoli was in 7th and unable to improve his position as Herlings took the race win with Paulin 2nd and Gajser 3rd.

Clement Desalle, who celebrates his 29th birthday, had to come back from last place after a crash on the first lap. the Belgian managed to climb up into 21st and will hope to rebound in tomorrow‰Ûªs racing.

Jeffrey Herlings in the qualifying press conference said: ‰ÛÏThe start was fine, Paulin had a better jump but then I was on the inside so I had a few meters less and out dragged him so it was really good to start out front. The speed was good and my bike was very good so I‰Ûªm looking forward to tomorrow.‰Û 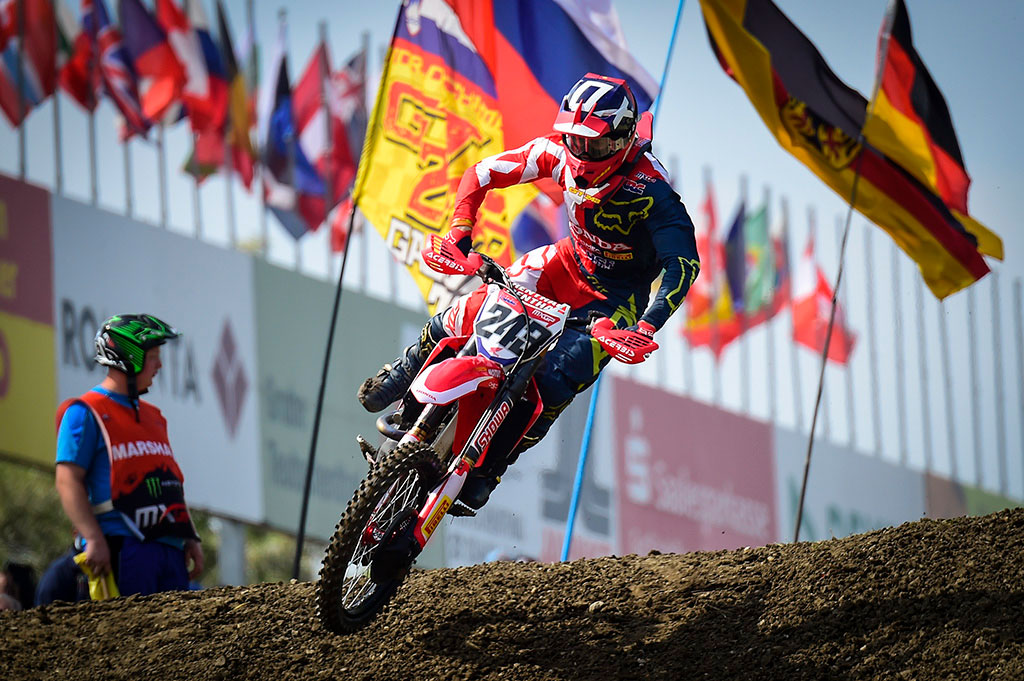 HRC Honda's Gajser is finding form finishing today in third place in the MXGP class. Photo: Youthstream
TM Racing Factory Team‰Ûªs Max Nagl is hoping to come away with a season best result for his fans at his home GP but struggled in today‰Ûªs Qualifying race when he scored an 18th place finish.

Nagl in the press conference said: ‰ÛÏAs always it is really nice to be at your home GP and you expect something a bit special. The problem was that I was reallyfar outside on the start and I couldn‰Ûªt do anything from there, you get pushed in the first corner and end up somewhere in the back of the field, then after I had a good ride and a good rhythm. Now I‰Ûªm looking forward to tomorrow because we will have a bit better gate pick, a little more inside and hopefully we can make something good tomorrow, also for the fans it would be nice.‰Û 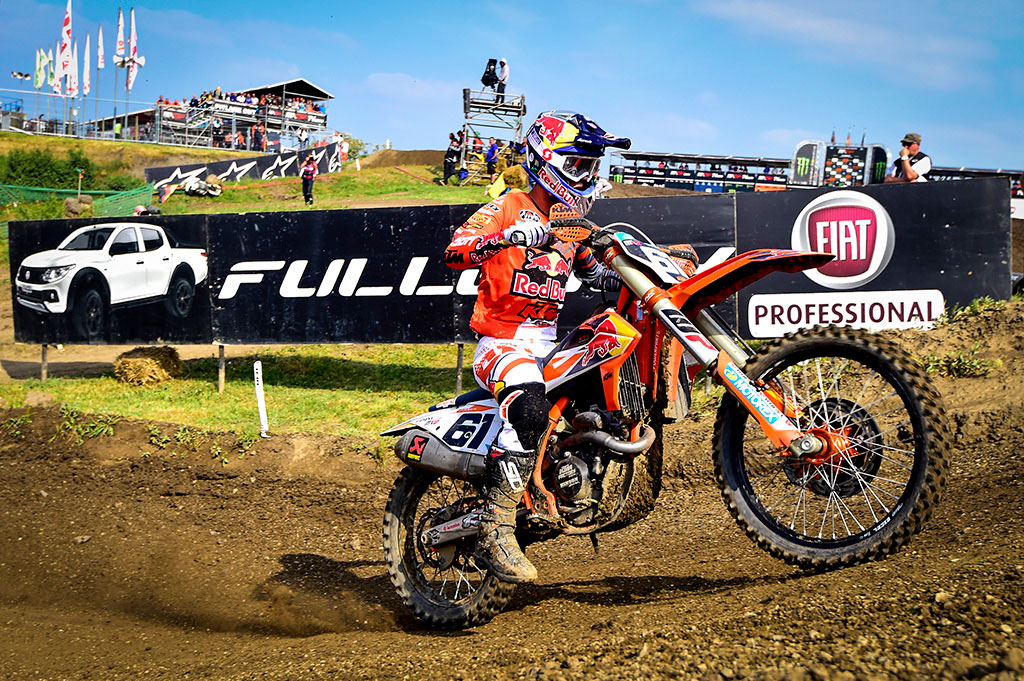 Jorge Prado held out Red Bull KTM team-mate Pauls Jonass to take the MX2 qualifying race win. Photo: Youthstream
In the MX2 Qualifying race it was another Holeshot from Red Bull KTM Factory Racing‰Ûªs Jorge Prado with his Teammate, Pauls Jonass, just behind. Chasing down the 2 KTM‰Ûªs was Thomas Covington but he wasn‰Ûªt alone, Team HRC‰Ûªs Calvin Vlaanderen was shadowing the American.

Vlaanderen looked good all day even scoring the fastest lap of the time practice session over Jonass by a close 6 hundredths of a second. The South African hounded the back wheel of Covington for the first 4 laps before taking over 3rd on lap 5.

Running in 5th position was Kemea Yamaha Official MX2‰Ûªs Ben Watson while his Teammate, Jago Geerts, was in 9th behind New Zealand‰Ûªs Dylan Walsh who traditionally races the EMX250 championship. Walsh had Thomas Kjer Olsen just ahead of him on lap one but by lap 2 Olsen had made his way to 6th with a pass on F&H Racing Team‰Ûªs Jed Beaton. 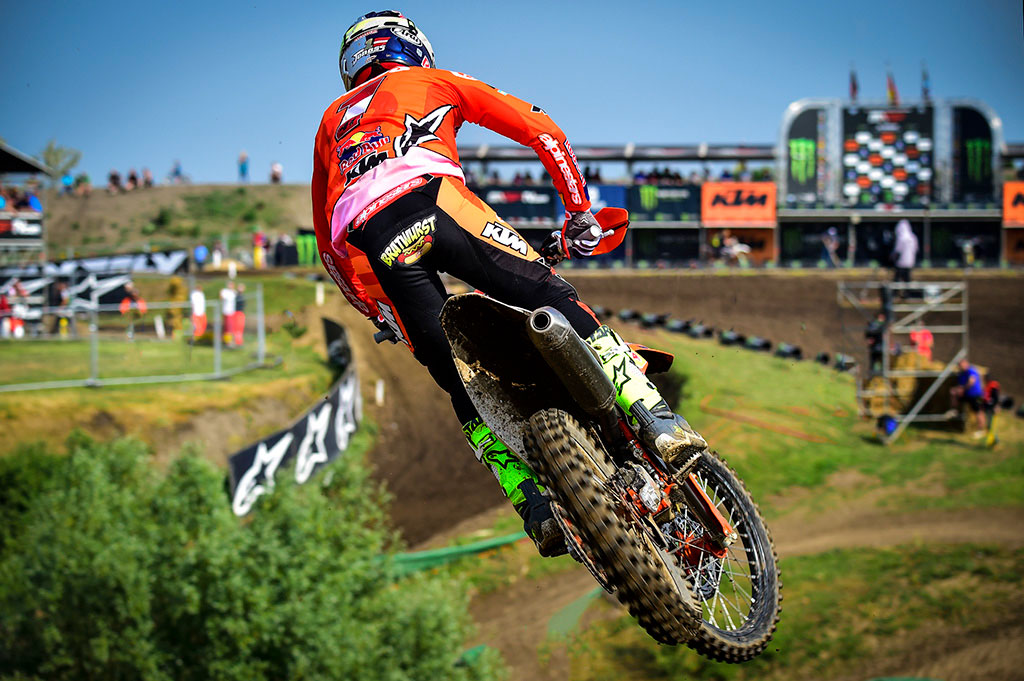 Pauls Jonass rode a fairly solitary race for second. Photo: Youthstream
Walsh however made a slight mistake on the 9th lap when he dropped his bike in a turn. Luckily for the Kiwi the error only cost him one position to TM Racing Factory Team‰Ûªs Samuele Bernardini.

Meanwhile Prado left Jonass to race on his own but Olsen was still making passes, by the finish Olsen passed both Watson and his teammate, Covington, to take 4th. Prado took the win with Jonass second and Vlaanderen 3rd.

Jorge Prado in the qualifying press conference said: ‰ÛÏI could finish the race in 1st after riding really good. Everybody is going really fast so if you have a bad start it is quite difficult to get to the front, but I had a good start so I‰Ûªm happy with my race.‰Û 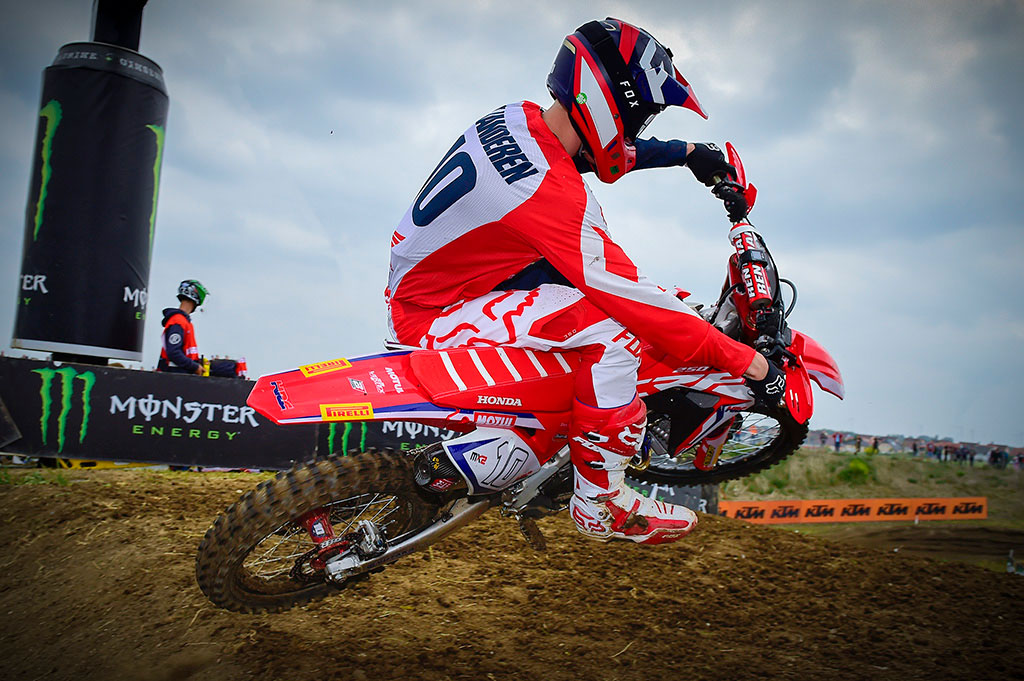 South African Calvin Vlaanderen took his Honda to third place in MX2 Photo: Youthstream
STC Racing Husqvarna‰Ûªs Henry Jacobi has had some strong results this season so far but today‰Ûªs qualifying was not one of them.

Jacobi racing in his home GP said, ‰ÛÏ(On the first lap) I just crashed, the front wheel slipped away and I was last but I did my best to come back to a little better gate position for tomorrow. Overall I feel quite good on the track‰Û_ I think I can turn it around for tomorrow, I think even the 15th gate pick is ok and I can get a top ten start, I will see, I will work from there.‰Û 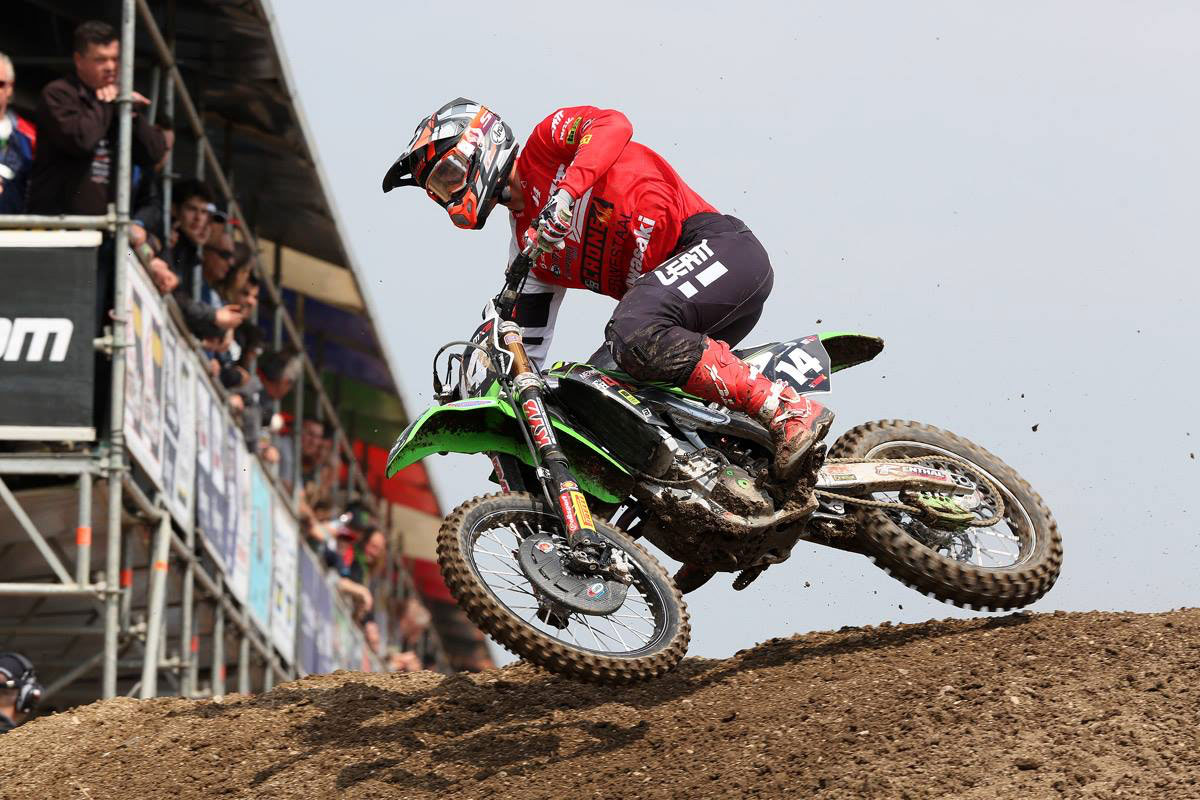