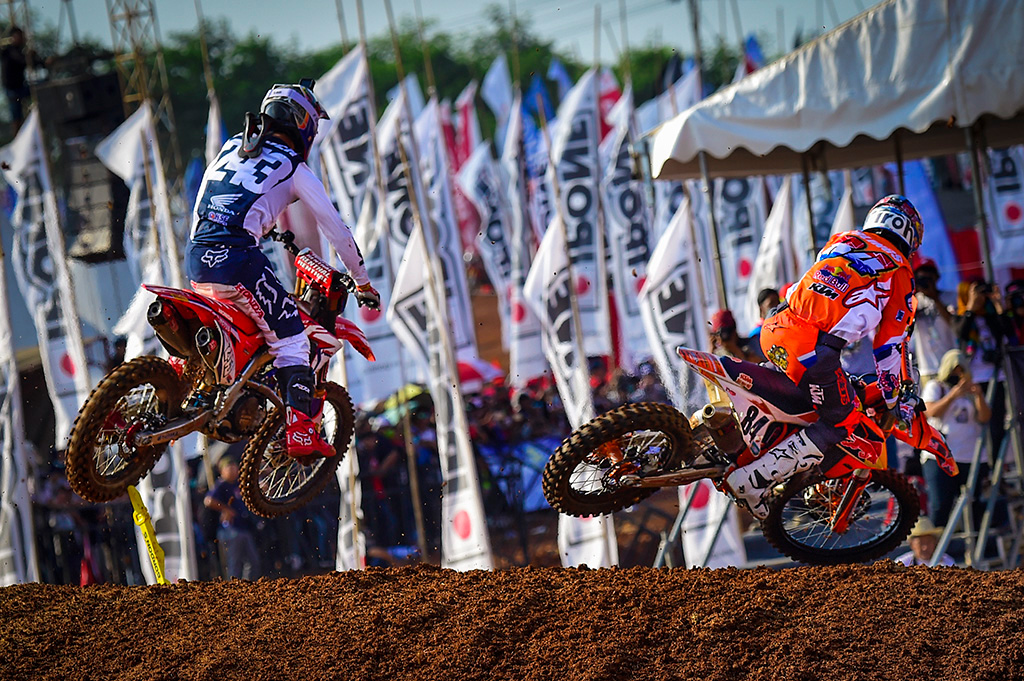 Jeffrey Herlings had a close battle with HRC's Tim Gasjer for the MX1 victory. Photo: Youthstream
Red Bull KTM Factory Racing‰Ûªs Jeffrey Herlings and Pauls Jonass have once again topped qualifying in MXGP and MX2 respectively at the MXGP of Asia in Semarang.

The friendly MXGP of Asia host city of Semarang welcomed the riders and paddock throughout the week and came out to watch the riders early this morning. Unique soil on the track tested the riders today. The 1,750 meter long circuit was full of pristine jumps rising and dropping along with the natural elevation change which produced lap times of just under 2 minutes.


MXGP‰Ûªs Qualifying race was led off of the start by Red Bull KTM Factory Racing‰Ûªs Jeffrey Herlings after he lined up third from the inside gate. Lining up to his inside on the long left hand start was the only two riders faster in Time Practice, Monster Energy Yamaha Factory MXGP‰Ûªs Romain Febvre and Team HRC‰Ûªs Tim Gajser. 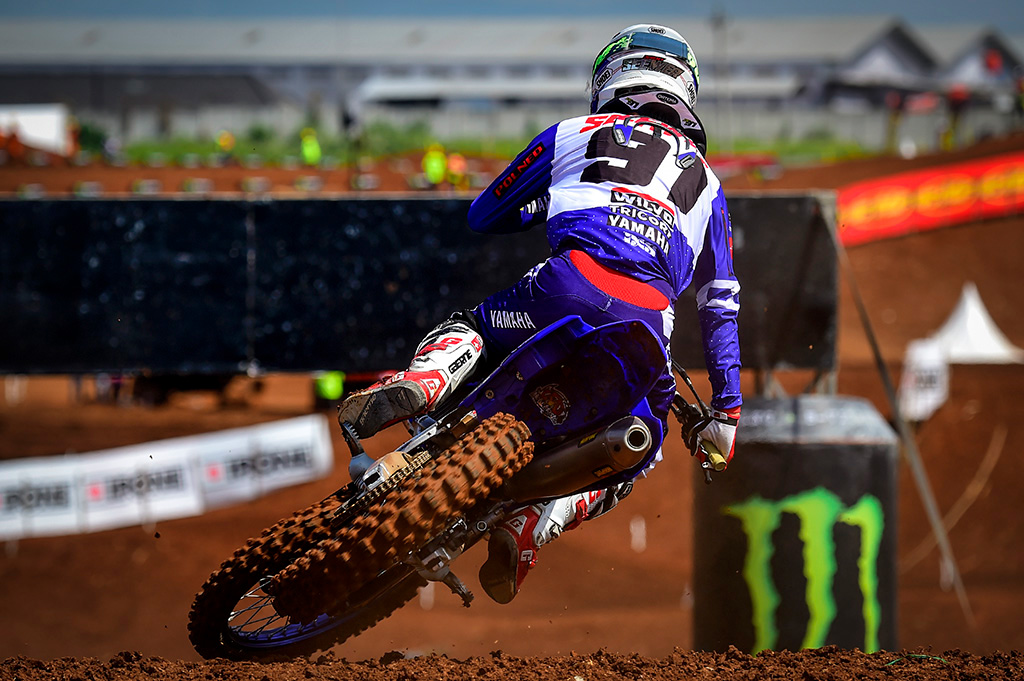 Yamaha's Jeremy Seewer rounded out the MX1 podium. Photo: Youthstream
While Herlings led he came under pressure from Gajser who charged early in the race to battle for the win. Gajser showed Herlings a wheel on many occasions but Herlings responded every time. As Gajser tried to match the pace of Herlings for the lead Febvre was urgently looking to pass Seewer for third. The pressure from Febvre increased as Herlings and Gajser pulled a slight gap on the pair of Yamaha‰Ûªs but to no success. Seewer responded to the charge of Febvre by catching Gajser.

Cairoli meanwhile had fought his way back into 6th after briefly being passed by Clement Desalle. The lead four had separated themselves from the rest of the field early and Cairoli was left fighting for 5th with Paulin. On lap 10 of 12 Paulin‰Ûªs fight for the spot was lost when he fell on the entry to a corner. The mistake from the #21 allowed both Cairoli and Desalle to move forward a position. At the finish Herlings topped Gajser by over 4 seconds with Seewer 3rd, Febvre 4th, and Cairoli 5th.

BOS GP‰Ûªs Evgeny Bobryshev and Julien Lieber both crashed separately during the race but Bobryshev was unable to rejoin the race while Lieber got back up in 13th. Leiber eventually finished 21st however after being penalized along with Bike It DRT Kawasaki‰Ûªs Tommy Searle in 22nd and Standing Construct KTM‰Ûªs Kevin Strijbos in 23rd. Also notable was the absence of the 2017 MXGP of Indonesia winner, Wilvo Yamaha Official MXGP‰Ûªs Shaun Simpson. 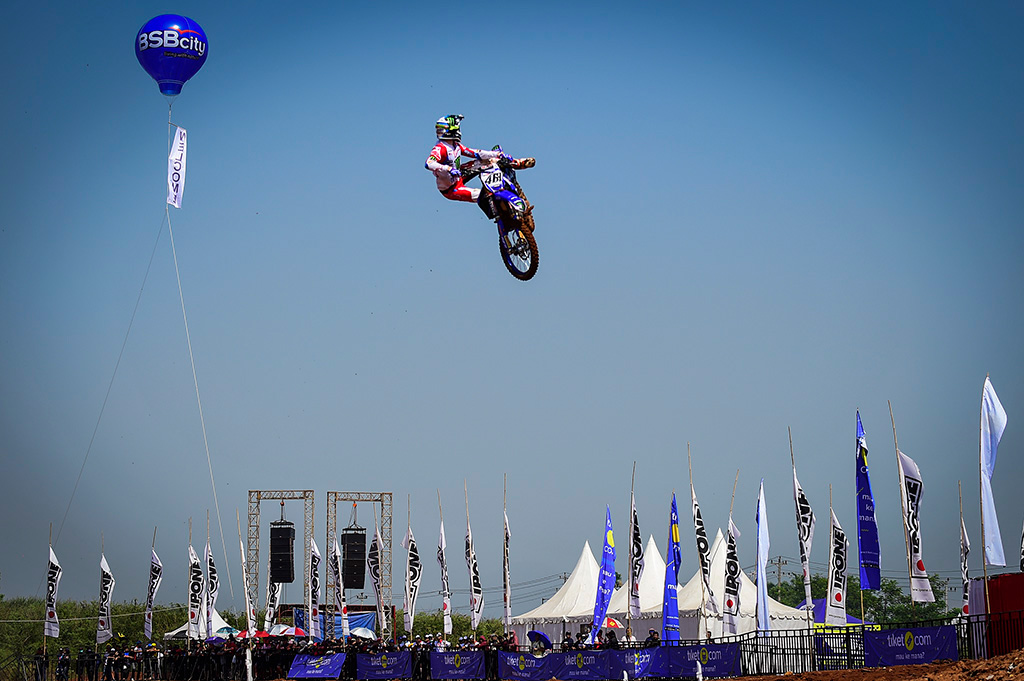 Gasjer, Seewer and Frenchman Romain Febvre all finished within a second for the final podium places. Photo: Youthstream
‰ÛÏI am feeling better every day I am riding," Herlings said. "It was a good day, qualifying first I think the inside gate will be best even though today I started from gate three. We will see how it goes tomorrow, I think the start will be really important but I think the track is absolutely awesome.‰Û 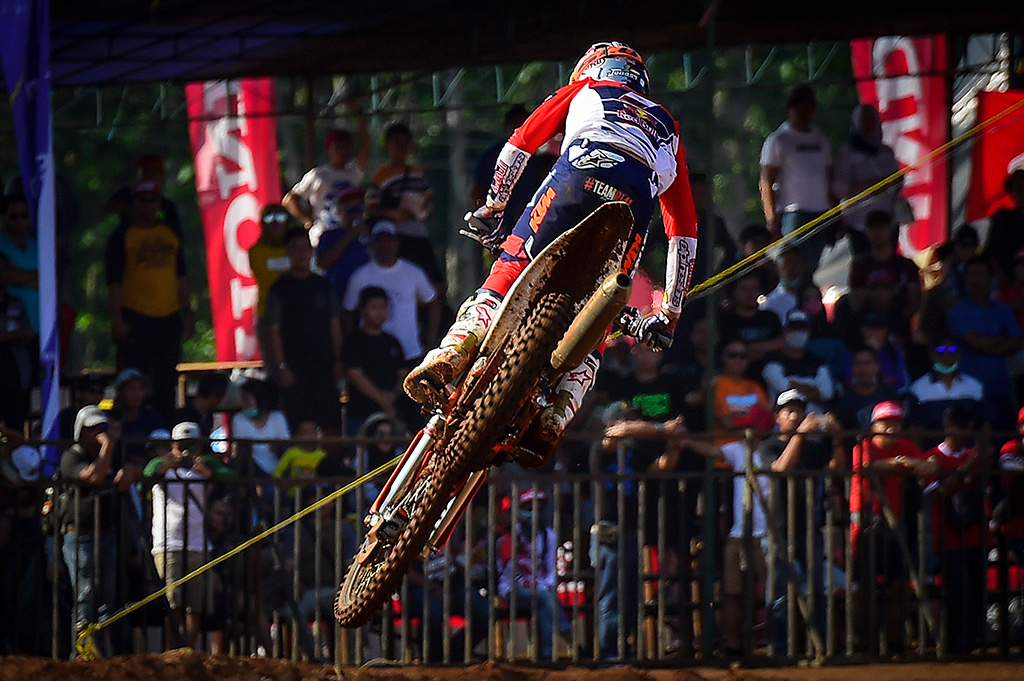 MX2 Championship leader Pauls Jonass was once again at the head of the field in MX2 qualifying. Photo: Youthstream
MX2‰Ûªs Racing was a sight for the Indonesian fans as well with the 250cc bikes stretching out the massive jumps of the Semarang circuit. Off the start it looked as if Kemea Yamaha Official MX2 Team‰Ûªs Ben Watson was about to take his first holeshot. Unfortunately for Watson Red Bull KTM Factory Racing‰Ûªs Jorge Prado came out of the first turn with the lead.

The first portion of the race Prado held a steady pace and lead over Jonass but just before the halfway mark Jonass started making up time little by little. Prado then reached the tail end of lapped traffic which allowed Jonass to close the gap to nearly nothing. With Jonass on the back wheel of Prado it took just over a lap to make a pass for the lead stick. 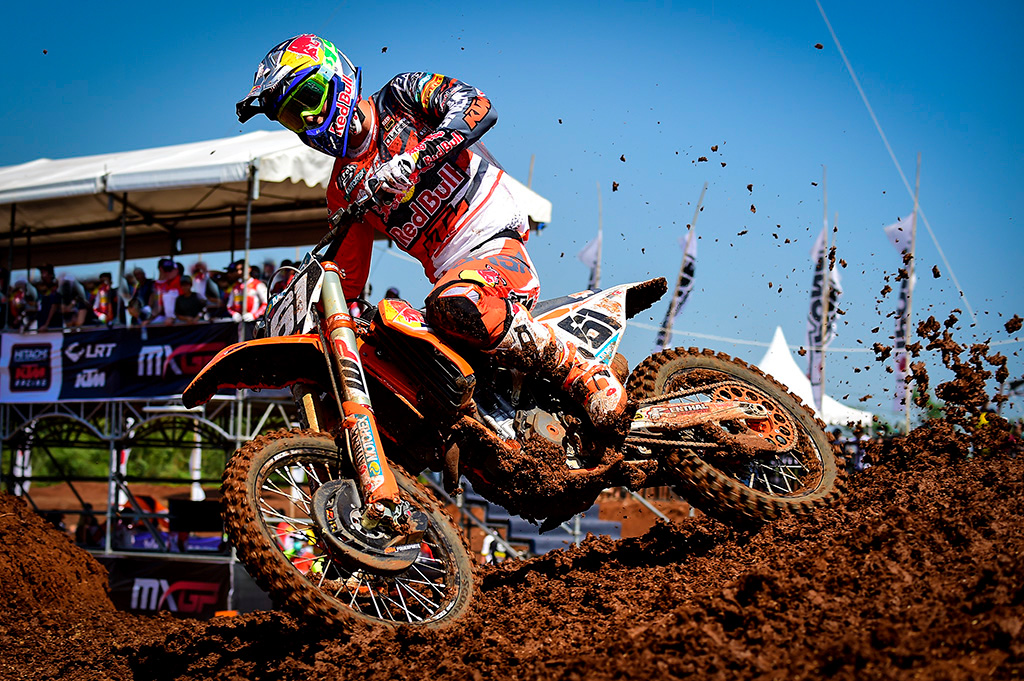 Championship challenger Jorge Prado was second, three and a half seconds adrift of Jonass. Photo: Youthstream
Another rider on a clear mission to forward was Kemea Yamaha Official MX2‰Ûªs Anthony Rodriguez. Rodriguez looked comfortable on the track since Free Practice and showed impressive speed passing both Cervellin and Geerts in the race to take 7th.

The remainder of the race stayed relatively unchanged and at the finish Jonass kept Prado behind him to score his 4th pole position of 2018 with Watson 3rd, Olsen 4th, Covington 5th, and Vlaanderen matching his qualifying position from last week of 6th.

‰ÛÏThe qualifying went really good," Jonass said. "I haven‰Ûªt won a qualifying race in a while so it was good to win and go the gate first because here the start is very important. I think they did a really good job on the track.‰Û 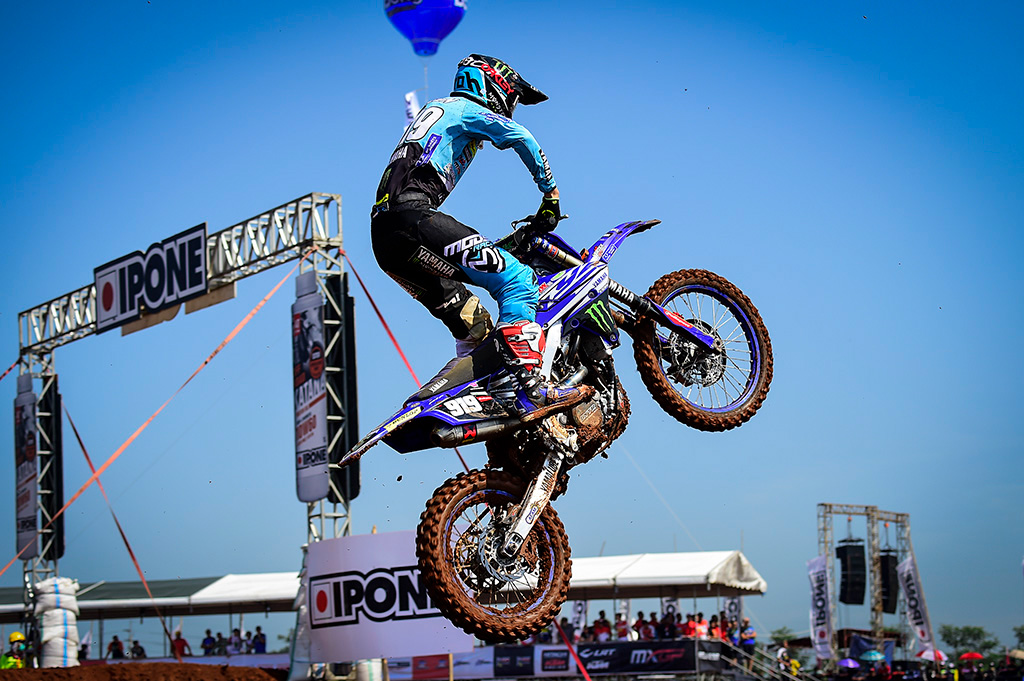