The final round of the 2017 FIM Motocross World Championship has been completed at the Villars sous Ecot circuit in France and while it was Jeffrey Herlings and Thomas Covington that took the wins and Pauls Jonass crowned MX2 champ, it will be remebered more by Australians as the day two young Aussies made the podium. 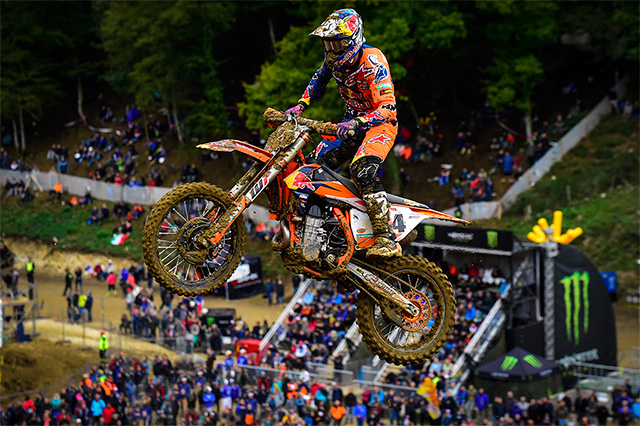 KTM's Jeffrey Herlings won the final round of MXGP and finished second overall in the championship in his debut year in the big boar class. Credit: Youthstream
By lap 2 Anstie found his way back past Coldenhoff as Gajser and Febvre rode away out front. Rockstar Energy Husqvarna Factory Racing‰Ûªs Gautier Paulin ran 5th early and held off Red Bull KTM Factory Racing‰Ûªs Jeffrey Herlings for two laps before the Dutchman made it past.

Herlings continued his charge forward passing his teammate and countryman Coldenhoff. Paulin followed suit and also passed Coldenhoff on lap 6. Back at the front the crowd vibrantly cheered on their french hero Romain Febvre as he tried to catch up enough to make a pass attempt on Gajser. Febvre would get close but never close enough to make the move. 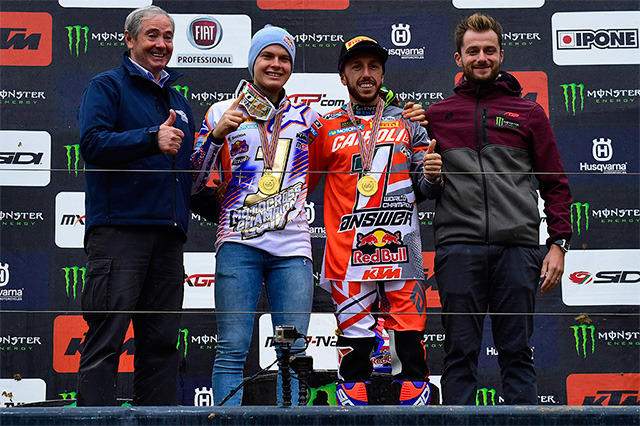 Pauls Jonass was crowned MX2 champion and along with MXGP Champion Toni Cairoli made it a KTM 1-2. Credit: Youthstream
On lap 12 of 16 Herlings found his way around Anstie after following the Brit for 8 laps. Anstie tried to retaliate toward the end but would come up short. Gajser took the race win ahead of Febvre, Herlings, Anstie, and Paulin.

Race 2 kicked off with another good start from Anstie and though Herlings took Fox Holeshot Anstie had the better line afterwards and took the lead. Herlings and Anstie stayed together while Tim Gajser followed the entire race.

Cairoli later pulled off and did not finish but Bobryshev kept hounding Tonus eventually taking the position. 4 laps later Romain Febvre, who fell off of the start, took the 4th spot from Bobryshev and one lap later Bobryshev fell and would finish 23rd. 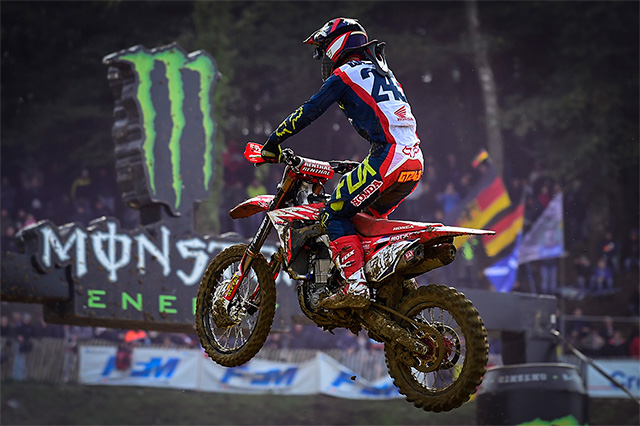 Out-going champ Tim Gajser finished the year of strongly with second place. Credit: Youthstream
Back up front Herlings was looking for a way past Anstie, after recovering from a mistake, and at first had no luck. Several tries later Herlings found his way by Anstie who wasn‰Ûªt in the mood to back down. The two riders had one of the best battles of the season giving the fans a proper finale.

In the end Herlings held the spot and took the overall.

‰ÛÏIn the second race I got my first FOX Holeshot of the year and that was a big surprise for myself, after the holeshot Max actually passed me straight back as he was on the inside," Hearlings explained. "I had some good lines and I wanted to overtake him, I was next to him a couple of times in easier lines but then he changed the lines and he was actually riding perfect so it was hard to get passed him‰Û_ but I eventually passed him and we made it.‰Û 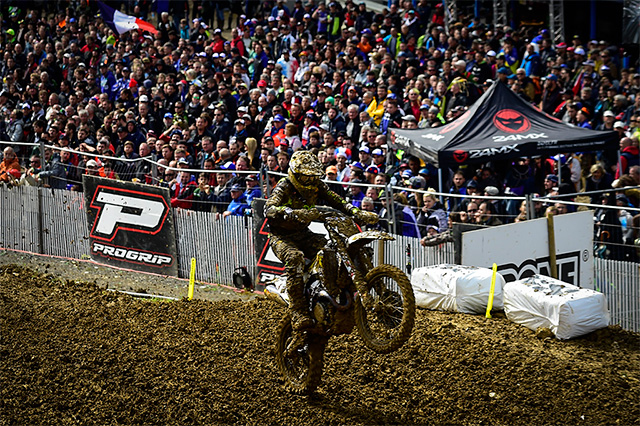 Max Anstie rounded out the final MXGP class podium of the year and finished 9th in the championship. Credit: Youthstream
Third overall was Max Anstie adding to his recent success in his rookie season. Anstie later said: ‰ÛÏI think last year riding MX2 I was good but I‰Ûªm a lot stronger now. In the second race I got good drive down the first turn, got past Jeffrey, had my lines and was sticking to them. I felt like I was just banging in lap after lap and felt good but I knew Jeffrey made a mistake and at that point, I didn‰Ûªt really relax, but it kind of changed my mindset a little bit‰Û_Jeffrey got to me again and then I got back on it, tried to be smooth in my ruts and we had a good race to the end.‰Û 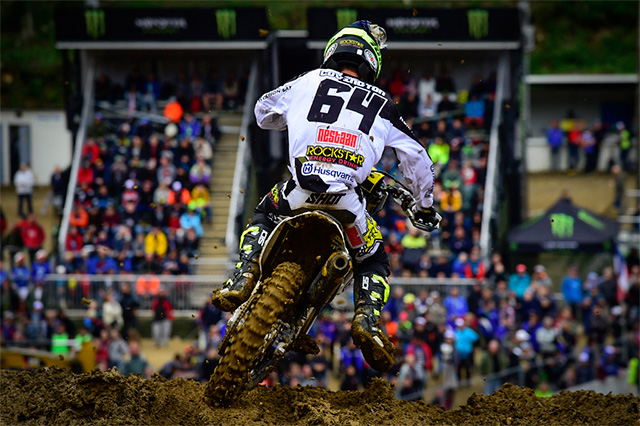 American Thomas Covington won the final MX2 race of 2017 and finished 4th overall.. Credit: Youthstream
When the MX2 racing started many looked to the #41 of Red Bull KTM Factory Racing‰Ûªs Pauls Jonass as he had the chance to clinch the 2017 MX2 Championship in race 1.

However the race started out challenging for Jonass when after taking the FOX Holeshot he collided with another rider and went down. Pauls struggling to get his bike up and going again and just when he did he fell once again in the next corner.

As Jonass picked up his bike again the field was gone and it was led by Rockstar Energy Husqvarna Factory Racing‰Ûªs Thomas Covington and Team Suzuki World MX2‰Ûªs Jeremy Seewer.

Covington and Seewer were first followed by Rockstar Energy Husqvarna Factory Racing‰Ûªs Thomas Kjer Olsen. Olsen however had a pair of falls drop him back to a 7th place finish. 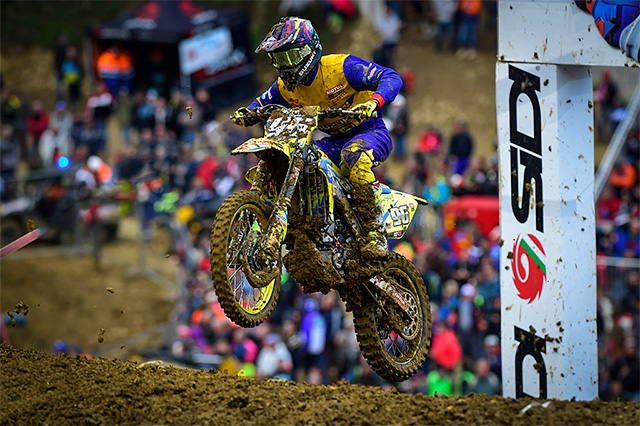 Australian Hunter Lawrence took his first race win after taking out yesterday's qualifying race and landed on the podium with second overall for the round. . Credit: Youthstream
Jonass meanwhile was recovering from his errors and though he only needed a 12th to win the title by the end he made his way up to 5 behind Covington, Seewer, HRC MX2‰Ûªs Jed Beaton, and Team Suzuki World MX2‰Ûªs Hunter Lawrence.

Race 2 started with a Fox Holeshot for Thomas Covington over HSF Motorsports Brian Bogers and the #96 of Hunter Lawrence. Lawrence passed both Bogers and Covington on the second lap to take the lead.

HRC MX2‰Ûªs Jed Beaton had another good race and was 5th the first laps while Jonass again had a bad start this time spinning off of the gate. Jeremy Seewer started the race 4th but by lap 5 was second behind Lawrence but 3 laps later Covington was again finding his rhythm and made it back by Seewer. Seewer on the next to last lap fell and dropped to fifth behind Beaton as Jonass who started in 9th made his way to 3rd. 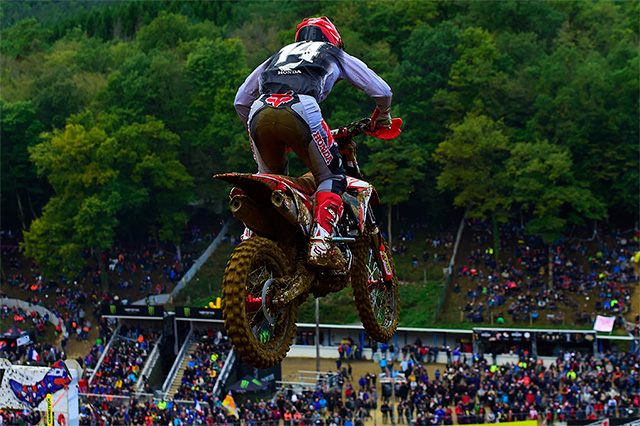 In a fill in ride for HRC, young Aussie Jed Beaton took his first podium on the world championship stage.. Credit: Youthstream
Thomas Covington finished second in the race but won the overall.

‰ÛÏIt is good way to top off the year with a race like this, it gives me some more motivation through the off season and to be ready for next year," Covington said. "The last few weeks the starts have been really good and I think that is one of the biggest improvements I have made towards the last part of the season. The bike is just a rocket ship out of the gate and we saw that today. The start is so important in conditions like this and I made the most of it.‰Û 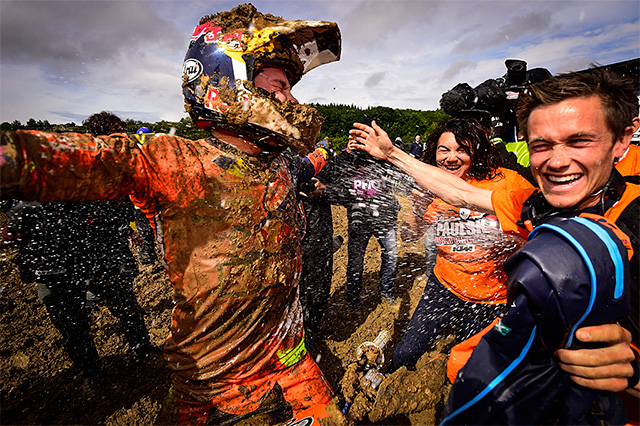 KTM's Pauls Jonass took the 2017 MX2 championship after taking a third in the first moto. Credit: Youthstream
Jonass took 5th overall but is the new MX2 World Champion in season that has been demanding physically and mentally he has proven to be the strongest.

‰ÛÏIt has been my dream since I started riding to be a world champion, it was a special moment when I accomplished that after the first race actually," Jonass said.

"I made it pretty tough for myself crashing in the second corner of the first race and then I got up, cleaned everything, then crashed again in the next corner. I started from dead last and finished fifth which was enough for the championship and I was really happy about that.‰Û