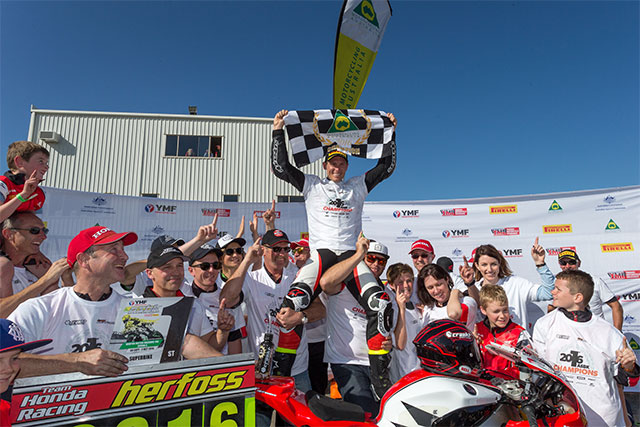 Despite unpredictable weather across the country throughout the last week, the sun rose to reveal clear blue skies over the Winton Motor Raceway circuit this morning, providing the perfect backdrop for today‰Ûªs season decider to play out in.

After an eventful qualifying session yesterday, crowds expected one seriously action packed day of racing from the Yamaha Motorcycle Insurance Superbikes today, and with Herfoss, Wayne Maxwell and Glenn Allerton all in contention for a championship, action is exactly what unfolded.

When bikes headed to the grid for their first race of the weekend, the track temperature was sitting at 28.9 degrees and there was an undeniable championship buzz in the air. With Herfoss and Maxwell separated by only six points, spectators knew the first outing for the Yamaha Motorcycle Insurance Superbike class would not only be nail biting but crucial to the championship.

It was no surprise to see pole position setter Herfoss get the perfect start off the grid, moving immediately in to the race lead ahead of Josh Waters and team mate Jamie Stauffer. But Stauffer just wasn‰Ûªt able to hold off Yamaha Racing Team‰Ûªs Cru Halliday who pushed hard down the back straight to move in to third position behind Waters and race leader Herfoss.

With four laps in the books, both YRT teammates Allerton and Maxwell were notably absent from the top five, the pair sitting back in sixth and seventh positions. But despite two of the Yamaha‰Ûªs being well back in the field, Halliday was in no way out of the equation, and by lap five the young rider began to apply the pressure on Waters for second.

When riders reached the halfway mark in race one, Herfoss continued to lead by more than a second from Apex Team Motorsport‰Ûªs Waters in second, followed by Halliday in third. Crankt Protein Honda Racing‰Ûªs Stauffer remained in fourth position from Maxwell who had made his way to fifth ahead of Knobby Underwear Suzuki's Brayden Elliott.

By lap 11, riders began to drop the lap times, and tyre conditions well and truly came in to play, and on the same lap that Waters recorded his slowest lap time, Halliday capitalised on the opportunity and moved in to second position.

From there things really heated up on track, as Halliday closed in on Herfoss back markers came in to play, and with three laps to go, Halliday made an aggressive pass on Herfoss for the lead for the first time in race one, relegating the championship hopeful to second position. 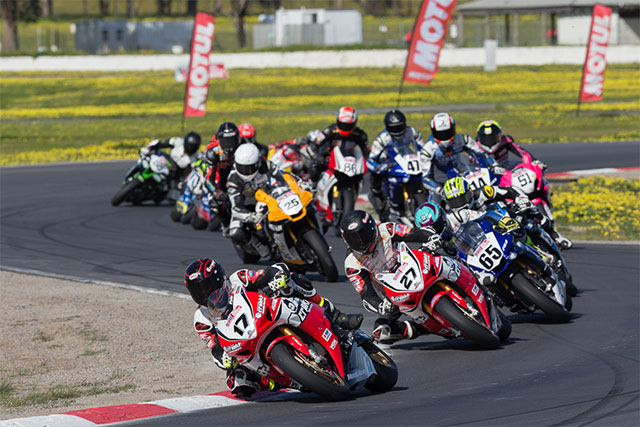 Troy Herfoss leads the pack at Winton
From there, Halliday was able to keep it upright, stretch out his lead to 1.421 seconds, and scream down the straight to his first race victory of 2016. Second place was taken by Herfoss who managed to keep Waters behind him - who finished in third.

Yamaha Racing Team‰Ûªs Maxwell managed to claw his way up to fourth position by the chequered flag, which ensured he maintain his championship lead by three points over Herfoss, while Stuaffer finished in fifth place.

When the Yamaha Motorcycle Insurance Superbikes headed to the grid for their final race of 2016, competitors were armed with the knowledge that a champion would be crowned upon the chequered flag, and with a minimal three points separating Maxwell from Herfoss, the last race was set to be the most epic showdown of the year.

With Maxwell starting from the third row on the grid, the Yamaha rider looked to have his work cut out for him if he was to clinch the title, and when bikes screamed off the start and in to the first turn it was the Honda pair Herfoss and Stauffer who led the way.

Three laps in to the Superbikes 17 lap journey, Herfoss had stretched out his lead on Waters to a comfortable 1.4 seconds ‰ÛÒ meanwhile title contender Maxwell remained way back in eighth position.

With Herfoss and Waters well out in front, the battle for third place between Halliday, Allerton, Stauffer, Daniel Falzon and Maxwell kept the crowd well and truly guessing, but more than ever the question looming was who could manage their tyres all the way to the chequered flag.

By the seven lap mark, Allerton made the move on teammate Halliday for third position, putting himself in the direct line of view of Water‰Ûªs rear wheel. Meanwhile fellow Yamaha mounted Maxwell continued to make steady progress towards the front, managing to find his way to sixth position by the halfway mark in the race.

With seven laps remaining, Herfoss continued to lead from Waters by 3.935 seconds, while Allerton remained in third position. But in what was a huge turn of events, it all went pear shaped at the 11 lap mark for the championship leader, with Maxwell going down in the center of the track, unable to re-join race and effectively deciding the 2016 championship.

With Maxwell out of the equation, Allerton looked to make up crucial championship points, and with Waters lacking race fitness, the YRT rider made the pass on Waters in the closing stages of the race. But unfortunately for Waters the passing didn‰Ûªt stop there, with Elliott also making passes on numerous riders, including Waters to slot up to third position.

But the man of the moment was simply Herfoss, who‰Ûªs smart and consistent ride saw him lead from the minute bikes left the grid to when the chequered flag flew. Even with Allerton making his way to second, and Elliott taking his first ever Superbike podium in third, Herfoss did exactly what was required to not only win the final race but secure the 2016 Yamaha Motorcycle Insurance Superbike Championship by a commanding 17 points. With Maxwell crashing out, second in the YMI Superbikes was awarded to Allerton, while teammate Maxwell captured enough points throughout the season to finish in third despite the DNF in the final race.

‰ÛÏIt‰Ûªs so hard to explain, I know I wanted to win the championship, and I could have finished last in race two and still won the title, but the feeling of winning races makes this victory so much better, and I really wanted to stamp my authority on the Championship, and show that I deserve it," Herfoss shared.

‰ÛÏThat race win in my mind, I showed everyone that I earned the Championship. Glenn and Wayne both fight so hard all the time on the track, it‰Ûªs so intense with those guys.

"I am just really proud to win this championship for Honda especially with this bike. To get another Championship for them is really a proud moment for me. Thanks to the whole Crankt Protein Honda Team.

"This whole season has just been such a roller coaster for me, I took the Championship lead for a while and then had a real low point after the Eastern Creek round, I had to work hard from then and everyone stepped up.

"It has been such an intense final part of the year, and I have had to be riding at one hundred and ten percent. It's a great Championship and I am enjoying it. I love that you have to get the final one per-centers out to win races," Hefoss finished.