Heats wrap up, and finals roar to life at KTM AJMX 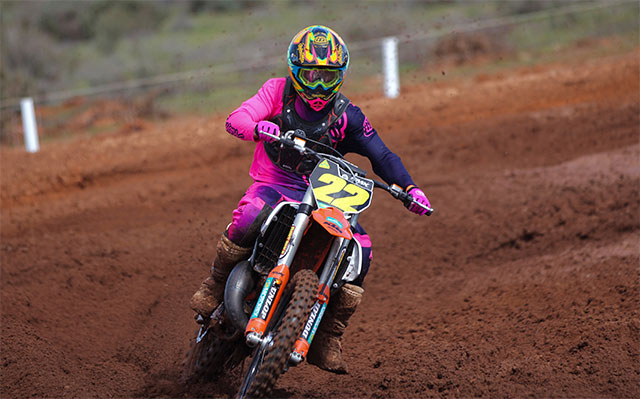 After a huge number of the last heat races today, eight classes took part in finals this afternoon, with a handful of competitors edging closer to a 2016 KTM Australian Junior Motocross Championship.

Despite the threat of storms, the weather held off at the Riverland Junior Motorcycle Club in Renmark, allowing competitors the opportunity to continue with racing, keeping the brave spectators entertained up until 5:00pm.

With all heats now completed, nearly all classes will have full grids for finals, meaning following the trend this afternoon, the next two days are sure to be action packed.

The ladies headed out for the third final on their 250cc machines late this afternoon, and the track was a stark comparison to what riders had experienced in the morning. With the surface wet and tacky, Tahlia O‰ÛªHare once again showed her skill on the varying surface, moving straight in to the race lead where she stayed for the entire moto.

Emilee McPherson put in one of her most impressive rides so far this week, steering her Honda machine to second position. Layla Norton also put in a consistent race, wrapping up the third final in third.

Unfortunately for Tanesha Harnett who has been one of the most competitive riders so far this week, a crash in the back section of the track forced her to drop positions, eventually crossing the line in 10th place.

When the 13-U15 Years riders on the 250cc machines headed out for their fourth final this afternoon, once again it was on for young and old. Mason Semmens launched off the start and in to the race lead, however on the first lap, the KTM rider went down, handing the top position to Rhys Budd.

Just back from Budd in second position was John Bova, while Regan Duffy maintained third position ahead of Levi Rogers.

As the fourth final went on, the only change to positions came when KTM‰Ûªs Duffy made a pass on Bova for second position. And it was in that order that the top three riders finished. Budd taking the victory from Duffy in second, while Bova wrapped up the fourth final in third.

Despite going down on lap one, Semmens clawed his way back to fourth place by the conclusion of the moto, ahead of Rogers in fifth.

The youngest competitors of this year‰Ûªs KTM AJMX got to head out for their first final this afternoon, and like clockwork, the minute the gates dropped, the rain started, making their jobs slightly trickier.

Despite the rain, Ky Woods had no problems in navigating the ruts and bumps, moving in to the race lead after only one lap ahead of Kayden Minear and Kayd Kingsford.

But only one lap later, Minear made the pass on Woods for the lead, relegating the youngster back to second position.

Thankfully for Minear, it was in the top spot that he stayed for the remainder of the moto. Woods crossed the line in second place, followed by Jett Williams who wrapped up his first final at Renmark in third. Heath Fisher concluded the race in fourth, while despite holding third position for a period of time, Kingsford wrapped up the first final in fifth.

In the fourth 85cc/150cc final for the girls this afternoon, it was once again a familiar sight with the 625 Western Australian machine of Tahlia O‰ÛªHare out in front from the minute the gate dropped.

With O‰ÛªHare out in front with more than a 44 second lead, Madison Healey and Tanesha Harnett commenced their battle for second position, and by lap five, despite Harnett crashing in one of her earlier races, the number 2 rider made the pass for second position.

From that point, there was no change to positions, with O‰ÛªHare taking a confidence boosting victory. Harnett crossed the line in second position, while Healey wrapped up the fourth final in third.

After plenty of action throughout the heat races for the 65cc 9-U11 years class, when bikes hit the track for their first final of the week, spectators watched on with anticipation to see where each rider would fit in.

An incredible 40 riders headed out to race this afternoon, but it was Noah Smerdon who fought off tough competition throughout the seven-minute moto, to eventually cross the line with the first final victory.

With Smerdon taking the win, second place was snatched up by Ryder Kingsford who fought off William Kennedy for the full duration of the race. Fourth place was taken by Jett Burgess-Stevens, while Jake Snow crossed the finish line in fifth.

The fourth final for the 85cc/150cc 14-U16 Years class allowed Husqvarna‰Ûªs Bailey Malkiewicz to return to his winning ways.

Malkiewicz led from the minute the gate dropped, taking a completely unchallenged victory. Behind him, Tyler Darby and John Bova battled for a period of time for second position, however when the chequered flag flew, it was Darby who crossed the line with a second placing.

Bova wrapped up his fourth 85cc/150cc 14-U16 Years class final in third position, ahead of Michael Murphy and Ryan Morgan who collected the chequered flag in fourth and fifth places respectively.

The older 65cc riders got to head out for their fourth final late this afternoon, and by the time bikes hit the track, the wind had picked up, the temperature had dropped, and kids were forced to contend with the elements, as well as put the results on the board.

Myles Gilmore raced to one of his best finishes of the week in the fourth final, surviving the deteriorating track conditions, to collect the race victory after five laps.

Liam Atkinson remained consistent throughout the moto to finish in an impressive second position, while Zachary Watson crossed the finish line in third. Both Deegan Mancinelli and Angus Riordan concluded their fourth final in fourth and fifth places respectively.

The 65cc 7-U9 Years riders were the last competitors to hit the track for a final this afternoon, and with a storm looming in the distance, the class were eager to get their race wrapped up before the rain set in.

Once again it was Kayden Minear and Jet Alsop who launched off the start and in to positions one and two, keeping spectators guessing as to who would be able to withstand the demanding track.

But unfortunately for Alsop, a crash in the back section of the track cost him positions, and allowed Minear to accelerate away. With Alsop out of the top three, Cole Davies managed to inherit second position, while Ky Woods held down third.

And it was in those positions that the 65cc 7-U9 Years riders finished. Minear collecting yet another race win, while Davies crossed the line in second, followed by Woods in third. Liam Owens wrapped up his first 65cc final in fourth, while Alsop recovered from his earlier crash to finish in fifth.

Finals action for the 2016 KTM Australian Junior Motocross competitors will continue tomorrow at the Riverland Junior Motorcycle Club at Renmark in South Australia.