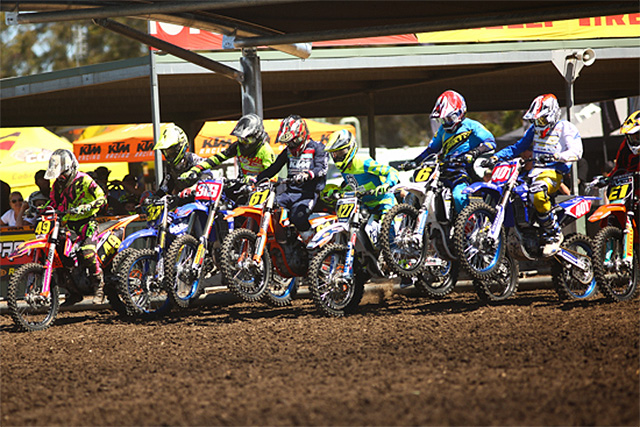 Conditions couldn‰Ûªt get any better on day three of the KTM Australian Junior Motocross Championship (AJMX) in Horsham, Victoria, as heat races continued along with the first of the final motos.

The circuit proved to withstand another day of racing, as all 13 categories took to the venue on what marked the halfway point of the week-long affair. With the finals now well underway, it's also means the Interstate Challenge and FIM Oceania Junior MX Challenge are in full swing. Results to come as all classes progress to finals racing.

Junior Lites 15 Years - Heat 3 and 4:
The third heat of the Junior Lites 15 Years class was dominated by Victorian Mason Semmens after he gapped the field in the early stages, shining in the tricky conditions to add another heat race victory to his name. New South Welshman John Bova settled into second, while Western Australian Mat Fabry built a comfortable advantage to secure third. Completing the top five was Tyler Darby (NSW) and Thomas Larwood (SA).

Heat four looked to be all but wrapped up Queensland‰Ûªs Jack Kukas, although a costly mistake with just over a lap to go relegated him to second, allowing Rhys Budd of New South Wales to steal the victory. Bailey Malkiewicz (QLD) recovered from a poor start for third, as Joshua Zorbas (QLD) and Joshua Whitehead (NSW) were fourth and fifth respectively.

Junior Lites 13-U15 Years - Final 1:
A hole-shot in race one of the younger age group Junior Lites class gave Queensland‰Ûªs Levi Rogers the best chance of victory, which he grasped with both hands to take a two-second victory. He was pressured by Estonian Meico Vettik for much of the race, but the visiting international backed off in the closing stages, finding himself under attack from Dante Hyam (NSW). He held on for second by the smallest of margins, as it was Liam Andrews (VIC) and Regan Duffy (WA) concluded the top five.

125cc 15 Years - Final 1:
In the hotly-contested 125cc 15 Years class, Victoria‰Ûªs Mason Semmens bounced back from a poor start to hunt down early leader Bailey Malkiewicz (QLD), passing him for the lead - and ultimately the victory - in just the closing stages of the moto. Mat Fabry of Western Australia edged out Tyler Darby (NSW) for third, as Riley Ward (QLD) closed out the top five. Queensland‰Ûªs Jack Kukas featured inside the top five for much of the race, but a suspension malfunction saw him salvage sixth.

In what would be the race of the day, Estonian Meico Vettik and New South Welshman Korey McMahon battled for the heat four victory - it was McMahon who led majority of the outing, until Vettik laid the pass down with just a corner to go. Liam Andrews (VIC) held on for third followed by Alex Larwood (SA) and Tye Jones (QLD).

Mini Lites BW 14-U16 Years - Final 1:
The opening moto of the Mini Lites BW 14-U16 Years was all about Queensland‰Ûªs Noah Ferguson after he displayed a commanding ride, taking the win by over 10 seconds. New South Welshman Tyler Darby maintained second for the duration, while Victorian Zack Wright held on for a distant third. It was a close race for fourth as Kai Newbold (SA) and Jai Walker (QLD) crossed the line with a small margin between them.

Mini Lites BW 12-U14 Years - Heat 3 and 4:
In heat 3 of the Mini Lites 12-U14 Years category, Blake Fox (NSW) captured victory after keeping New Zealand ace Brodie Connolly at bay for the length of the 10-minute plus one lap race, while it was Victorian hopeful Matthew O‰ÛªKeefe who maintained third. Cobie Bourke of New Zealand settled for fourth, as yesterday‰Ûªs heat two victor Rory Fairbrother (NSW) crossed the line in fifth.

Heat four saw South Australia‰Ûªs Alex Larwood continue his winning form, lodging another strong victory and cementing himself as a title favourite. Queensland‰Ûªs Deegan Mancinelli pulled through for a consistent second, while the battle of the race went down between Benny Novack (NSW) and Zachary Watson (QLD), as only three hundredths of a second split them at the chequers. Western Australia‰Ûªs Myles Gilmore was just shy of the battle for third to take home fifth.

Ladies Mini Lites 12-U16 Years - Final 1:
The Ladies Mini Lites 12-U16 Years division was all about Queensland‰Ûªs Charli Cannon after she dominated the moto, clearing the field with a commanding 40-second advantage. Victoria‰Ûªs Madi Healey slotted into a comfortable second, while it was Holli Greeves (TAS), Jayde Dudley (NSW) and Aimee Butler (SA) who were third, fourth and fifth respectively.

Mini Lites SW 9-U12 Years - Heat 3 and 4:
It was another stellar performance from Jet Burgess-Steven of Tasmania, who stormed to a convincing 14-second victory in the heat three of the Mini Lites SW 9-U12 Years class. New South Welshman Max Miller put what has been a challenging week so far behind to claim second, as Jasper Moon (NSW), Ryder Kingsford (NSW) and Tyler Wiremu (NZ) completed the top five.

65cc 11-U12 Years - Final 1:
Fresh off capturing victory in his 85cc heat, Connor Towill (NSW) returned for victory aboard his 65cc in the 11-U12 Years class. He put on an incredible display, as Seth Burchell of New South Wales fended off Queenslander Jesse Holding for the number two spot. Jasper Moon (NSW) and Kobe Drew (QLD) wound up in fourth and fifth respectively.

65cc 9-U11 Years - Heat 3 and 4:
Youthful Queenslander Jet Alsop led the charge in heat three of the 65cc 9-U11 Years category, pushing his way through to a five-second victory ahead of New Zealand‰Ûªs Cole Davies. Braden Plath (QLD) and Angus Pearce (TAS) engaged in a battle for third that came right down to the wire, but it was Plath who held the advantage at the race‰Ûªs end. New South Welshman Koby Hantis recorded a respectable fifth place finish.

Heat four saw Kayden Minear (WA) and Ky Woods (NSW) challenge for victory, with the competitive duo duking it out for the duration - Minear clearing the line with the advantage. The battle for third was just as close, as Jason West (QLD) and Liam Owens (QLD) were only separated by under half a second. Cooper Dudley of New South Wales lodged a fifth place result to complete the top five.