Heat races dish out the action at KTM AJMX 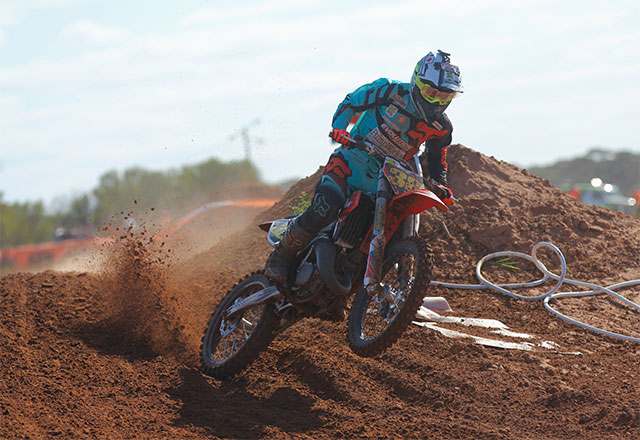 After a busy morning on track, the KTM Australian Junior Motocross Championship continued with plenty of action this afternoon, with riders once again hitting the rich red soil for action packed heat races.

With a whopping 18 races to get through at the Riverland Junior Motorcycle Club this afternoon, every rider that headed out on track had something to prove, ensuring they snatched up valuable points all in a bid to qualify for finals later in the week.

When the first race kicked off for the 50cc 7-U9 years class today, the youngsters of the AJMX did well to navigate the challenging track conditions throughout their seven-minute race.

The 61 machine of Kayden Minear was impressive throughout heat three, proving that a tough start wouldn‰Ûªt hold him up, fighting back from sixth position to finish with the race victory. Despite leading for the majority of the moto, Jett Williams finished in second followed by Kayd Kingsford in third.

In heat two it was Jake Cannon who showed his ability to be a future star. After leading from the minute the gate dropped, Cannon secured the heat two win from Koby Hantis in second, while youngster Oliver Paterno navigated the bumps and ruts to cross the line in third.

In the third heat for the 65cc 9-U11 Years class this afternoon, Ryder Kingsford took off to a flying start, putting significant distance between himself and closest competitor Jake Snow.

And with Kingsford out in front with more than a six second lead, spectators shifted their attention to the battle for second where Snow and William Kennedy were going head to head. And by the time riders received the last lap board, Kennedy had made a successful pass on Snow to move in to second position.

So when the chequered flag flew, it was Kingsford who managed the race win from Kennedy who held on to finish in second ahead of Snow in third.

In heat four for the 65cc 9-U11 Years class, Noah Smerdon and Jett Burgess-Steves utilised the first half of the race to put a huge gap between themselves and third placed Jett Kipps.

Despite Burgess-Stevens coming off with only two laps remaining, the gap to third served him well, and the young 65cc rider was able to remount his machine and re-join the race where he came off, in second position.

But once again the triple 4 machine of Smerdon was unmatchable, and when the chequered flag flew it was his KTM that crossed the line victorious. Second place was taken by Burgess-Stevens, while Cooper Dudley managed to make the pass on Kipps to finish in an impressive third position.

By the time the youngsters in the 65cc 7-U9 years class headed out for their third and fourth heats, riders were greeted by a very different dried out surface. In heat one Jet Alsop was once again impressive leading the way from Liam Owens and Kayd Kingsford.

And it was in those positions that riders crossed the finish line in ‰ÛÒ Alsop collecting the heat three victory ahead of Owens and Kingsford who both wrapped up their heat in second and third positions.

In heat four, it was the New Zealander Cole Davies who launched out of the start gates and in to the lead, but after only one lap, Kayden Minear began to apply the pressure for the top spot, setting the race up as a fight to the finish line.

And fight they did, with only two laps remaining, Western Australia‰Ûªs Minear made the move up in to the lead position, relegating Davies to second place ahead of Koby Hantis. From there, there was no change to positions with Minear collecting the win from Davies and Hantis who finished in second and third places respectively.

The third heat for the 100cc-125cc 13-U15 Years class got the spectators attention to say the least. After showing incredible form throughout the first two days of the championships, Mason Semmens once again made his way to the front where he stayed for the duration of the race.

With Semmens out in front, the attention shifted to the unfolding battle for second, with local boy Cooper Sheidow fighting off the likes of Michael Murphy and and Levi Rogers. However, it was Rogers who stole the limelight on lap four, passing both Murphy and Sheidow to move up to second position.

But it was the perfect ending to heat three from KTM‰Ûªs Semmens who collected the victory by more than 25 seconds from Rogers. Third was taken by Connor McNamara, while Thomas Larwood and Sheidow wrapped up the race in fourth and fifth places.

In heat four the talent was just as thick as the race prior. This time though, it was Rhys Budd who showcased his skill and expertise on his KTM machine. After three laps, Budd led by a healthy four seconds from Bailey Malkeiwicz and John Bova, while Estonian Meiko Vettik was back in fourth position.

With ten minutes on the clock for riders in heat four, Budd continued to stretch out his lead, while the rest of the field also spread out. And it was in those positions that riders finished in ‰ÛÒ Budd collecting the victory from Malkeiwicz who crossed the line in second, while Bova collected third.

When the premier class of the KTM AJMX hit the track this afternoon, riders were treated to a newly watered surface for heat three to take place on. And despite Mitch Outram leading on lap one, it took no time at all for Yamaha‰Ûªs Michael Driscoll to move in to the top position.

From there, the top three riders separated themselves from the group, Driscoll leading the way from Outram and Kai Stephen in second and third positions.

Despite suffering a tough start, Riley Dukes was super impressive in heat three, making his way from 11th all the way up to 4th position after ten minutes.

But the man of the moment was Driscoll who took the win by 11 seconds, while Outram finished in second ahead of Stephen and Dukes.

Thankfully for spectators, the fourth heat did not disappoint either. KTM‰Ûªs Caleb Grothues secured the hole shot and checked out, leaving Liam Walsh, Cody Dyce, Morgan Fogarty and Callum Norton to go head to head for positions behind him.

And fight they did, Fogarty and Norton were on a charge, and before long had made the pass on Walsh and Dyce to snatch up second and third positions behind Grothues.

But the excitement didn‰Ûªt stop there. Fogarty‰Ûªs energy was superhuman as heat four progressed, and with only two laps left, Fogarty found Grothues‰Ûª rear wheel and made the pass for the lead as bikes headed toward the back of the track.

And from there no one was able to catch Fogarty who took the heat four win. Grothues wrapped up the race in second, while Norton finished in third.

The third heat for the 85cc/150cc 9-U12 Years class was held late this afternoon, and the youngsters on the 85cc machines did an exceptional job navigating the challenging rough Riverland circuit. Despite Brock Flynn leading on lap one, it was Brad West who made his way to the front after the second lap, where he stayed for a period of time before coming under fire from Liam Atkinson.

And with entry to the finals on his mind, Atkinson made the move on West for the top spot, where he stayed for the remainder of the moto.

West wrapped up heat three in second position followed by Zachary Watson who crossed the finish line in third.

In the fourth heat race, the first two laps proved to be very eventful. Despite Blake Fox holding on to the top spot when bikes first came around, it was Deegan Mancinelli who led the way as the race progressed.

When riders received the last lap board, no one was able to match Mancinelli‰Ûªs speed, and when the class came around again just a lap later, the New South Welshman claimed the heat four victory. Gilmore wrapped up his final race for the day in second, while Fox fought back to finish in third.

The third heat for the 85cc/150cc 12-U14 Years class was unfortunately red flagged after two laps due to a crash in the back section of the track, which meant heat four took to the line first this afternoon.

When bikes left the grid, it was Husqvarna mounted Kipp Adams who got to the early race lead, followed by Rhys Burnett and Blake Hollis, but the top three riders were not free from pressure ‰ÛÒ only a bikes length behind them was New Zealand‰Ûªs Brodie Connolly, and Kyle Evans, keeping spectators on the edge of their seats.

And by the nine-minute mark, spectators were treated to a battle for the race lead. After Connolly had made the move into second position, the New Zealander began to attack Adams, but Adams showed maturity and only a few turns later Connolly had gone down, allowing Adams to continue to lead.

From there, Adams was unstoppable, collecting the chequered flag in first position ahead of Burnett in second, followed by Evans who inherited third after Connolly‰Ûªs get off.

When the third heat headed back to the line for their restart, local boy Alex Larwood once again shot out of the gates and in to the race lead ahead of Tyran Tomich and Regan Duffy.

But unfortunately for Larwood his time at the front was cut short after a crash in the top section of the track, however the youngster re-joined the race in fourth position.

With Larwood out of the picture, Duffy inherited the race lead, however was in now way clear of the competition, with Meiko Vettik up in to second position after making the move on Tomich.

And as the third heat reached it‰Ûªs closing stages, Vettik made his move to the front, pushing Duffy back to second position with a lap to spare. And it was in those positions that the competitors stayed. The international star Vettik securing the heat win from Duffy in second, while Tomich crossed the line in third.