The 2017 Fiat Professional MXGP of Belgium finished in amazing fashion today! After a soggy Saturday, race today started with the sun shining as the best MXGP and MX2 riders took to the demanding sands of Lommel.

Focus, strength, and skill all combined into winning performances for Red Bull KTM Factory Racing‰Ûªs Jeffrey Herlings in MX1 and Jorge Prado Garcia in MX2. Not only was it a KTM 1-2 it was the Astrian brand that filled all six podium positions at the end of the day!.

Herlings came into the weekend focused on winning on the sand and as racing started he found himself second on the first lap sandwiched between his teammates, Glen Coldenhoff, and Antonio Cairoli.

Coldenhoff led the his fellow countryman while Cairoli gave chase to the two dutch riders. Coldenhoff managed to hold his own against the man know as the sand master, Herlings, for the first laps. It was on lap 6 that Herlings found his way by and looked to check out from Cairoli and the rest. 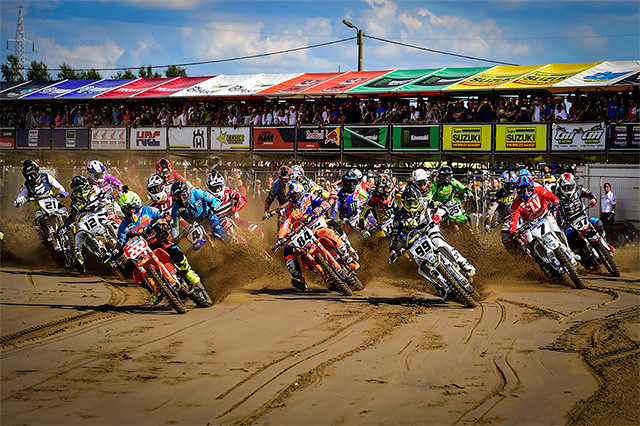 The MX class head into the tough sands of Lomell
While Herlings led, Coldenhoff responded to the charges of Cairoli well for the next 5 laps at which point Cairoli went by. The battle for the position wasn‰Ûªt over though and thanks to a mistake from Cairoli, Coldenhoff slid back by for another lap before Cairoli reclaimed the spot and took second and 27 seconds behind Herlings.

As Coldenhoff took third it looked as if Monster Energy Yamaha Factory MXGP Team‰Ûªs Romain Febvre would take fourth but the french rider fell on the last lap which gave his teammate Jeremy Van Horebeek the position. Finishing out the race 1 top 5 was Rockstar Energy Husqvarna Factory Racing‰Ûªs Max Nagl.

Race 2 started with another FOX Holeshot from Cairoli but Herlings was second across the chalk and he went to work quickly making a pass on the Italian before even reaching the green flag. From there the two newly found rivals went all out in a brilliant race. 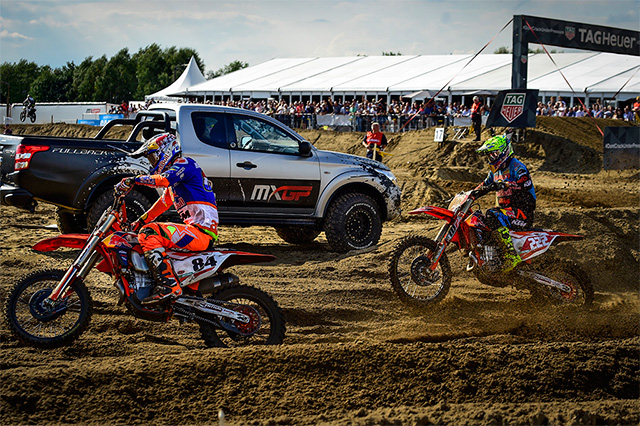 Jeffrey Herlings and Antonio Cairoli chased each other all weekend with Herlings coming out on top.
Behind the battle for the lead and ultimately the race win was 2nd in the MXGP championship Monster Energy Kawasaki Racing‰Ûªs Clement Desalle. The Belgian soon made a mistake which opened the door for Team Suzuki World MXGP‰Ûªs Arminas Jasikonis and Rockstar Energy Husqvarna Factory Racing‰Ûªs Max Anstie.

Desalle picked himself up behind Anstie but then Jasikonis crashed out of the race moving Anstie to third and Desalle to 4th ahead of Coldenhoff. Confidence from his race 1 podium pushed Coldenhoff to pass Desalle for the position and 2 more overall points.

Back at the front Herlings and Cairoli were having the battle that fans had been dreaming of. Cairoli showed aggression in a pass for the lead pushing the #84 out wide. Half a lap later Herlings dove to the inside of Cairoli but it was answered immediately by the Sicilian. Banging bars for several laps Herlings again passed Cairoli in the same corner but this time brake checked the #222 machine. Herlings antics provided him with the lead as he sprinted away from Cairoli. 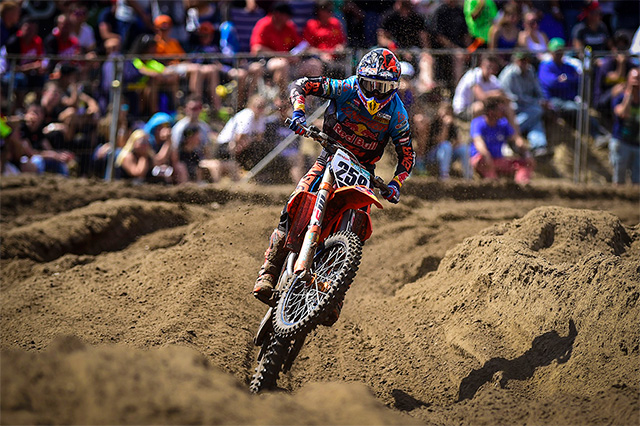 Glenn Coldenhoff made it a KTM sweep in MX1 with third overall
Cairoli backed off from his charge and settled for second in the race and overall dropping his pace the final laps. Cairoli in the press conference: ‰ÛÏI‰Ûªm really happy for sure, fighting against Jeffrey, he is one of the fastest in the world in this kind of soil, and we had good racing, also with Glenn in the first race he was very fast so it was fun.‰Û 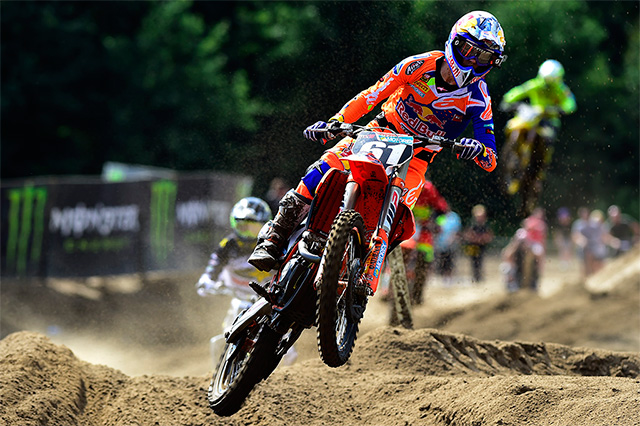 The Red Bull KTM Factory Racing rider and points leader Pauls Jonass was around 5th off the start but by the end of the first lap had already passed LRT KTM‰Ûªs Julien Lieber and Hitachi KTM UK‰Ûªs Ben Watson.

Jonass took only 3 laps to catch Seewer in 2nd, passing the #91 on lap 4. Jonass put his head down and caught Prado who remained determined putting up a fight to hold his position even against his points leading teammate. Jonass eventually broke away from Prado and took the win while Seewer took third ahead of Kemea Yamaha Official MX Team‰Ûªs Benoit Paturel and the #33 of Lieber.

Race 2‰Ûªs FOX Holeshot went to Rockstar Energy Husqvarna Factory Racing‰Ûªs Thomas Covington with Seewer again towards the front. A mistake in the first turn swallowed up a handful of riders including race 1 winner Jonass and third 4th place finisher Paturel. Jonass was among the last to get going again and on the opening lap was in 32nd position. 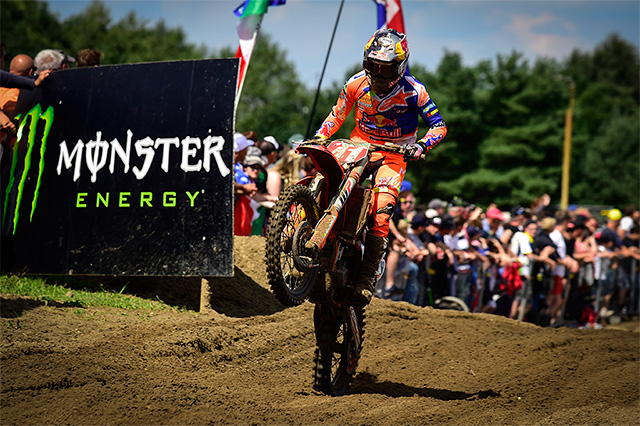 With second overall Pauls Jonass still has a handy championship lead
In the meantime Prado led with Covington and Lieber battling for 2nd and as Lieber passed Covington, Seewer fell out of 4th. The golden opportunity to gain points on Jonass started to slip away as Seewer remounted in 9th.

Jonass was instead moving forward through the pack at an amazing pace gaining 12 positions by lap 2 and he didn‰Ûªt stop there and by the end he would pass 27 competitors to place 5th. "I had that crash in the second race and I came from dead last to 5th place so it was not so bad. They say you win the championship on your bad days and think this was one of the days," Jonass said.

Seewer too moved forward but only back to where he had started in 4th.

Covington fell out second and he would not rejoin the race which gave Lieber second behind race 2 and overall winner Prado. "I‰Ûªm feeling pretty happy, you know it is pretty difficult to win a GP, everybody is riding really fast so it is hard work," Prado said. "This weekend the track was pretty tough and you really have to give it your all which I did." 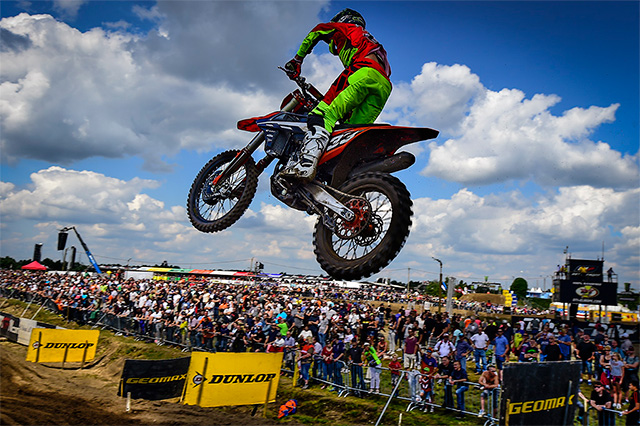 Julien Lieber completed the perfect weekend for KTM with third in MX2
In the overall Jonass took second behind Prado but ahead of Lieber, Seewer, and Rockstar Energy Husqvarna Factory Racing‰Ûªs Thomas Kjer Olsen. Lieber in the press conference: ‰ÛÏI‰Ûªm really happy to be back on the podium after a long time, I have struggled a lot the last races but this weekend was good.‰Û