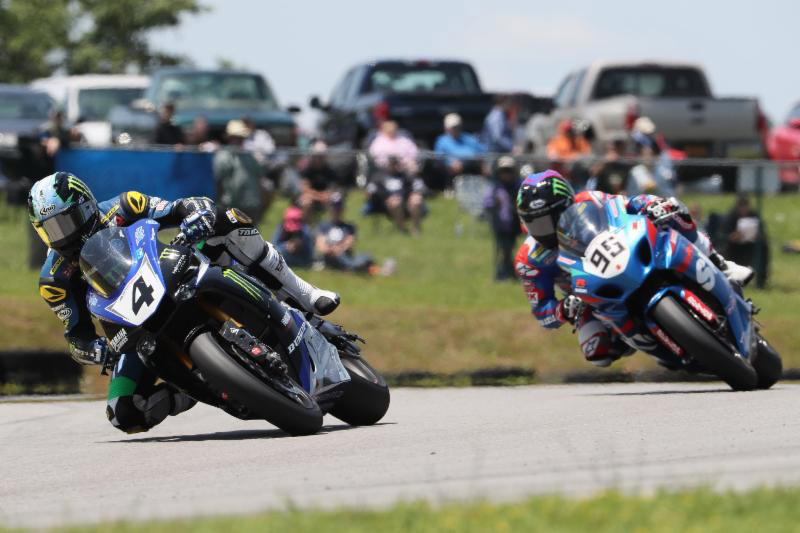 Hayes won his first race of the season on Sunday in Virginia, the four-time Superbike Champion winning race one to end his six-race winless streak and then ending his day with a second-place finish to his Monster Energy/Graves Yamaha teammate Cameron Beaubier.

By the end of the afternoon of racing in the Yamaha Superbike Challenge of Virginia, round four of the MotoAmerica AMA/FIM North American Road Racing Championship, the 41-year-old Hayes had extended his championship lead to 11 points after earning 45 points in the two races. Beaubier, with his impressive pass of Hayes on the final lap of race two, left VIR with 38 points added to his tally after his off-track excursion in race one forced him to fight through to finish fourth.

Yoshimura Suzuki teammates Roger Hayden and Toni Elias were both on the podium with Elias finishing third twice while Hayden was second in race one before slipping to fourth in race two. Hayden came away with more points than his Spanish teammate, 33-32, and Hayden now trails Hayes in the championship chase by 21 points with Elias a further five points behind.

"Definitely relief," Hayes said after winning his first race of the season. "It's been a pretty tough weekend. It's such a busy racetrack, such a physical racetrack with all the ups and downs and high-speed switchbacks. It's definitely a racetrack that takes its toll on you and doesn't give you any time to take a break. For the most part, most of the chaos worked in my favor to help me get up there. At one point, once Cam ran off, Toni was making quite a few mistakes, and I was able to get through and I was just focused on Rog.

"I put together some of my best laps to get close to Rog. Once I got in front, I was just kind of plugging away. The lap times were still low 25s and I was pretty proud of how things were going. I just tried to plug away. The last lap, I was tired, it was the end of the race and it was a hard race. I was nervous because I hadn't won a race in a long time and I'd done a lot of work in coming from 10th on the grid. I rode a little bit tight and made sure I covered all the areas where I thought he could pass me. I was really relieved to cross the finish line."

Beaubier's race two win was his class-leading fourth of the season and 15th of his Superbike career.

"That race definitely felt really good to get some redemption after making that mistake I made with running off the track in the first race," Beaubier said. "It felt great. At the beginning Toni and I were just tagging along and chipping away a decent pace. I knew there were some guys behind me and I knew Josh (Hayes) was coming just based off his pace from race one. When he passed us with about 10 laps to go, he was stretching it on us and I had to dig deep. I was struggling and he definitely had pace on me in the race. Like he said, he made one little bobble and I was able to sneak up right underneath him and hold him off on the rest of the lap."

The battle for victory in the Bazzaz Superstock 1000 class was also hard-fought with Claudio Corti riding the HSBK Aprilia to his fourth win of the season while finishing fifth overall in race one. In race two it was TOBC Yamaha's Danny Eslick taking his first career Superstock 1000 victory after getting the better of Latus Motors Racing's Bobby Fong and Wheels In Motion/Meen Motorsports' Josh Herrin.

After eight races in the four rounds, Corti, who was 12th in race two, holds a nine-point lead in the championship over Fong, who was second in both races at VIR, 145-138. Herrin, who crashed out of race one after getting hit from behind by Hayden while racing in the lead pack, is 27 points behind Corti in third place.

"He was pretty wide going in and I was already up the inside of him and he kinda swooped down and our lines were connected," Hayden said of the incident with Herrin. "I made contact and he went off. I didn't mean to make contact, but I thought he was running wide cause he was so far out."

Elias struggled all weekend with front-end woes on his Yoshimura Suzuki GSX-R1000, but his third-place finish in race two was the more impressive of his two podium finishes. Race two's pace was much faster, four seconds quicker over the 25 laps and Elias was 2.003 seconds behind in race two after finishing 8.365 seconds behind in the slower race one.

"The position was the same as before," Elias said of his second third-place finish. "But before I wasn't satisfied, but now I'm really satisfied with this position."

The second Supersport race was also a thriller with Y.E.S./Graves Motorsports Yamaha's Garrett Gerloff winning again to match his victory from Saturday. This one, though, was a battle from start to finish with six riders contesting the lead for the majority of the race - on three different makes of motorcycles. In the end it was Gerloff drafting past M4 Sportbike/TrackGear.com Suzuki's Valentin Debise at the flag to win by .038 of a second. Gerloff's teammate JD Beach was third, just .242 of a second behind, and Debise's teammate Cameron Petersen was a shadow fourth. Team H35 Honda's Benny Solis Jr. ended up fifth with Wheels In Motion/Meen Motorsports' Joe Roberts coming back from an off-track excursion to finish sixth.

"I knew there were three places where they could try (to pass) - seven, 14 and one," Gerloff said. "That was the hard part about leading the race. I had my pitboard saying plus 0 every lap, but I had no idea what was going on behind me - who it was and how many. The last lap I was trying to make it my best and the first half felt good and I was thinking I had a little bit more than anybody else, but Valentin came right under the inside of me in 14 and I don't know what I was thinking at that point.

"It was like, 'Okay, here we go.' I didn't want to risk my drive onto the front straightaway so I sat behind him and tried to square up that last corner as best I could and not spin up at all. I was able to get on his rear wheel on the straightaway... fifth, sixth gear the bike caught the draft and I was able to get on the edge of the tire and keep the rpms up and get around him. I had no idea who won until I saw the second monitor on the track. So until about turn seven, I was thinking that I was second or maybe first. It was exciting and a fun race."

The top Superstock 600 rider on Sunday was championship leader Bryce Prince on the Riders Discount/Tuned Racing Yamaha R6 - but just barely. Prince beat Richie Escalante to the line by just .006 of a second to take his third win of the season. Escalante's ride on the HB Racing/Meen Motorsports Yamaha was impressive in that it was just his first race weekend back on the bike after suffering an off-season leg injury that kept him out of the first four races. Third place in Sunday's Superstock 600 race went to Prince's teammate Jason Aguilar with HB Racing/Meen Motorsports' Dakota Mamola finishing fourth. Yesterday's winner Michael Gilbert was fifth on the Michael Gilbert Racing Yamaha R6.

Anthony Mazziotto III celebrated his 16th birthday a day early by sweeping to victory in the second KTM RC Cup race on Sunday, a day after he'd won race one. Mazziotto's championship rival Brandon Paasch was second on Sunday with Ashton Yates earning his second straight podium finish on his Yates Racing-backed RC390.


Top Image: Josh Hayes (4) beat Roger Hayden in the first of two MotoAmerica Superbike races at VIR to score his first victory of the 2016 season.