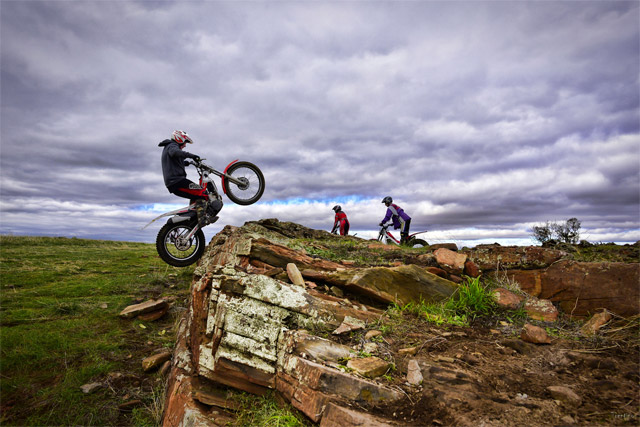 It was a perfect weekend to be out at the Rockleigh Challenge for the SA Moto Trials Championships hosted by the Juventus Motorcycle Club.

In what was a greatt turn out for spectators and riders alike, the Juventus Club continude to grow the Moto Trials family and now have the largest class of ladies/girls competing in South Australian Motorcycle sport.

Haydon Ahrens dominated the open class with a masterful performance to become the new SA #1.

Ahrens is a natural on his Sherco 250 amongst the rocks and slippery ridges climbing the literal and metaphorical mountains to his first championship win after only competing for a very short time.

Chris Schultz and Stuart Gerhardy (Sherco 320) rode brilliantly over the entire weekend also. Their skill and teamwork was just enough to hold off fellow sidecar competitors Stephen Rees and Melissa Rogers (Beta 250) in a close tussle. Rounding out the podium for the weekend in the A class sidecars were Glenn Ursino and Kevin Reynolds on their Montesa 4RT 250.

Rob White on his Honda 260 used all of his experience in the Vets class to only have 12 points against his name for the whole weekend. Haydon Barwick (Serco 125) took out the C grade Championship along with Clubman winner Shane Craft (Serco 320) and Brian Lang (Honda TLR 250) becoming the Historic champion to round out the Men‰Ûªs Competition.

With the Men‰Ûªs competition being done and dusted there was still the juniors and also the impressive women‰Ûªs field to come. It is a credit to the organisers and the family orientated competition that is being run. To have such a fantastic women‰Ûªs competition with 16 competitors across the various junior and women‰Ûªs classes is brilliant.

Sophie Kraft (Sherco 250) showed her skills as the highest ranked women‰Ûªs rider on the card and didn‰Ûªt disappoint taking the harder yellow line and getting in some practice before heading overseas to represent Australia in the World Championships starting in Great Britain less than a month away in July.

Jade Tiller showed impressive form on her Sherco 125 to lead Anna Rogers (Beta EVO 200) in the championships with both women riding the white line.

The Junior A women‰Ûªs competition was won by Jasmine Tarrant (Beta 125) and followed closely by Lillie Yiatrou (Beta 125) and Bridie Sutton (Gas Gas 80) It was an exciting competition with fantastic riding in the women‰Ûªs Junior B championship. Some of the closest results of the weekend between Charlotte Cowan and Matilda Hannaford.

The girls both rode like champions with only 3 points between them at the end of the weekend. It‰Ûªs great to see that the sport is in good hands for the future and with riders to look up to like Sophie Kraft the future is shining bright for women‰Ûªs moto trials in South Australia.

The weekend was also a prosperous one for the junior A men‰Ûªs competitors. Again it was only 3 points that separated eventual champion Joshua Rees on his Gas Gas 125 and runner up Patrick Hewitt (Serco 125). Daniel Fraser followed another 3 points behind the boys to round out the podium.

It was so close between all of the junior A men‰Ûªs riders that any of them could have ended up the championship with Coen Linke and Cameron Gerhardy finishing even on points and just missing out on standing on the podium.

Rounding out a fantastic weekend is the Junior B competition. Hayden Eardley rode brilliantly leading home Ryan Tarrant and Mitchell Thompson. Eardley riding his Oset 20 Racing 48v machine earnt only 4 points over the entire weekend. It surely won‰Ûªt be long until Hayden is climbing up the ranks in the Moto Trials competition.

Once again the South Australian Moto Trials Championships were a great success and the discipline has all the right ingredients and support to nurture the talents of all the riders, in particular the amazing juniors riders.