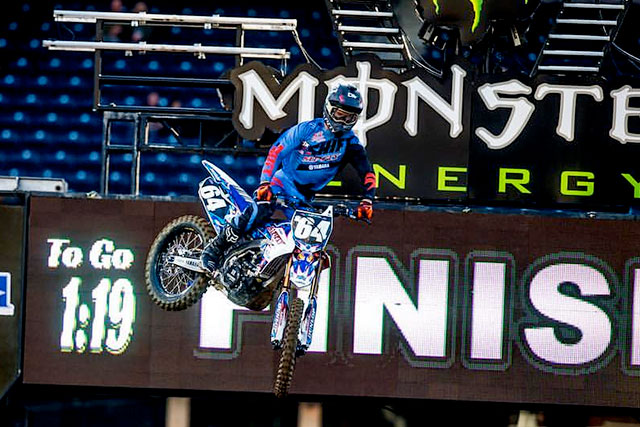 The Australian qualified a solid fifth in his heat after a race long battle with team-mate Tyler Bowers.

The gates dropped and the 22 riders funneled into the tight first corner, cutting off Mellross' line as Bowers snuck past on the inside. With no where to go, Hayden's front wheel was knocked out from under him and other bikes slammed into him from the back. With the bike battered and the rider bruised, the #64 was forced to retire.

"Each week my heat races have been going really well, and I'm showing these guys that I can run up front," remarked Mellross after the race. "Unfortunately, in the main, we collided and I went down hard on my hand and my bike was pretty bent. The hand is damaged somewhat but Ill be at Phoenix next weekend."

Whilst his heat races have been successful, qualifying straight through to the main in each of the three rounds that have been run, the finlas have not been as successful with Mellross having had two DNF's and a 9th and as a result sits 17th in the championship with 14 points.