Hayden Mellross re-signs to Race in the U.S with 51Fifty Yamaha 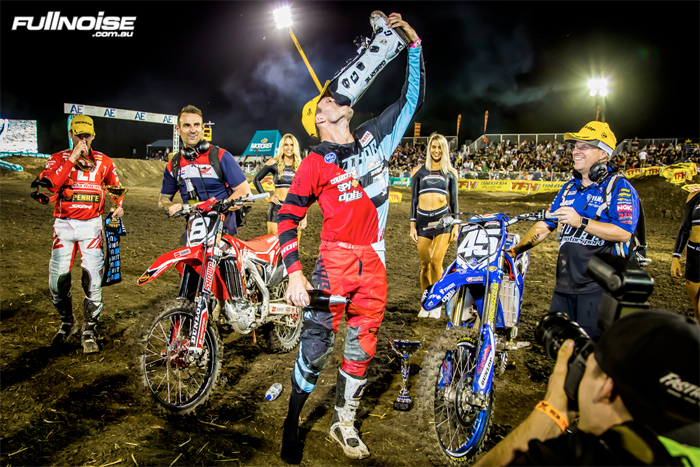 The 51FIFTY Energy Drink Yamaha Team have confirmed that they have extend their relationship with Hayden Mellross for the 2018 racing season.

The likable Australian will return to the team and race the West Coast 250 Supercross Series aboard a 51FIFTY Energy Drink Yamaha YZ250F. 2018 will mark Mellross' third consecutive year with the team, dating back to his rookie Supercross season in 2016.

Mellross was in great form at the start of the recently finished 2017 Australian Supercross Championship, winning the opening round comfortably in the SX2 class for the DPH Yamaha team and was leading the main event at round two by close to ten seconds before a crash left him sidelined from the remainder of the domestic series.

Despite the early exit from the Australian series, Mellross has been granted another great opportunity with a team and bike that seen him consistently inside the top ten during the 2017 American Supercross Championship in the 250SX West Coast class, with Mellross looking towards another bright season with the team.

"The future looks bright," said Mellross. "I'm very excited to be back on the 51FIFTY Energy Drink Yamaha Team. We've spent the last two seasons building a strong relationship together and I'm excited to continue that partnership into the new year."

"The team is looking forward to having Hayden back for 2018," team manager Craig Monty said. "We've watched him mature as a rider throughout the past few seasons and believe he has what it takes to reach our team goals this year. We are ready to see him aboard the 51FIFTY Energy Drink Yamaha YZ250F once again."

Look out for the #63 51FIFTY Energy Drink Yamaha YZ250F at the gate drop of the 2018 West Coast 250 Supercross Series in Anaheim, California. We look forward to seeing all of our dedicated sponsors and fans at the opening round of the new season.