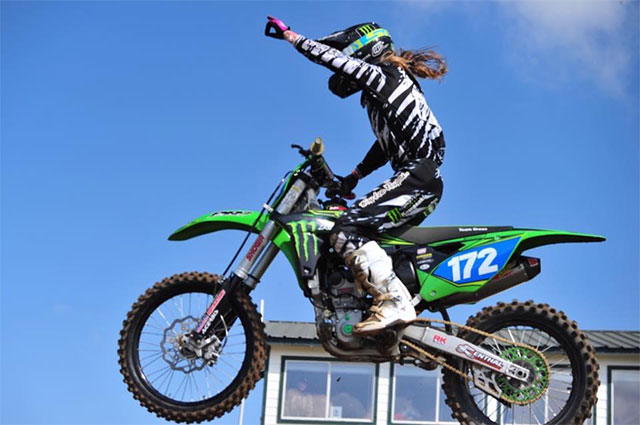 The second round of the Women's Motocross Championship (WMX) took place this past Saturday, March 19 at the renowned Freestone Raceway in Wortham, Texas.

Hodges turned in a perfect 1-1 score at Freestone, winning both motos en route to her overall win. However, the two races couldn't have been more different.

In moto one, the Team Green Kawasaki rider worked her way to the front from last place after colliding with another rider off the start. In moto two, Hodges grabbed the holeshot and led the entire distance of the race.

"It feels good to get the win after not being able to ride at Daytona," said Hodges. "The win gives me confidence for the rest of the season. I got a good jump in the first moto, but another rider came over on me and hit my clutch and I was last going into the first turn. I just put my head down after that and started picking off riders."

While Hodges was making her run to the front, Daytona winner and reigning champion Kylie Fasnacht was mounting a charge of her own. However, the Team Green Kawasaki rider was admittedly having her issues.

"I kind of struggled with the track a bit," said Fasnacht. "I kept blowing through my line in the turns, and that slowed me down a bit."

In the first moto Fasnacht eventually moved into second place late in the race and even challenged Hodges for the lead on the final lap, but was unable to make a pass.

"I tried a couple of times on that last lap to get around Hodges but making small mistakes and I eventually ran out of time," said Fasnacht. "I guess I need to be more steady on my throttle."

In moto two, Hodges made a clean start and led the pack into the opening lap of the race, where she would end up leading every lap. Meanwhile, Fasnacht was around sixth at the end of lap one, and spent most of the race trying to get around a fierce battle for second between Tricker and Markelon.

"Those two were side-by-side for most of the race, which made it hard to pass," said Fasnacht. "It took me a bit of time, but I finally got around Tricker first and then I caught Markelon."

Like she did in the first moto, once Fasnacht got into second she set out after Hodges, but once again she ran out of time.

"Freestone was a good race for me," said Hodges. "I was really looking forward to racing at Daytona but I had to sit that one out until the doctors cleared me, and I wasn't even sure I would be able to race in Texas, so it was good to get that win under my belt."

The overall results reflected the second moto results, with Hodges in first, followed by Fasnacht, Markelon, Tricker and Morrow.

The 10-round WMX series moves to the the west coast for the third round with the California Classic at Pala Raceway in San Diego, California on April 9.