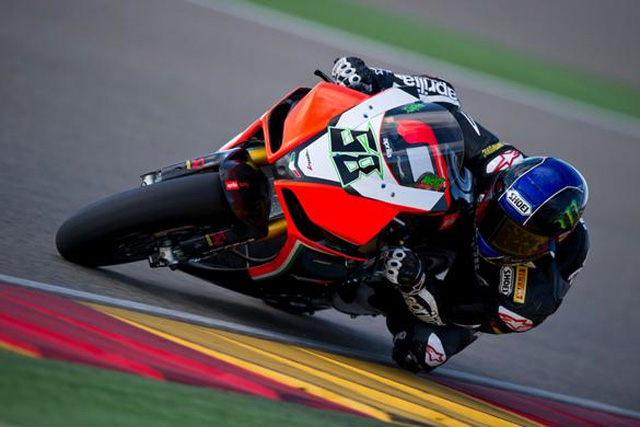 Factory Aprilia's Eugene Laverty is having no problems with the bones in the hand he broke in a big crash at the Phillip Island World Superbike opener three weeks ago and says he was even comfortable braking from 208mph along Motorland Aragon's front straight to a first-gear left-hander.

The likeable Irishman was with the works BMW and Kawasaki teams at a track he hasn't yet 'clicked with' over one fast lap but after a day of re-positioning himself on the tiny RSV4 and adjusting the strapping on his injured hand, he settled down to some serious laptimes, finishing on a 1'59.5.

"The test proved very difficult for us but we began to make big progress towards the end. I struggled at Aragon last year as well so it was clear that I needed to adjust my style to suit the circuit. We found a clear direction on day two and it was nice to finish the test on a positive note. I now have eleven days off the bike before Round Two at Imola so my hand should improve further by then."

"The hand isn't a big concern now after Aragon. We had to change the strapping on it after the first day but then it was fine, even braking from 208mph into the first corner. We're still doing some of the pre-season work, getting comfortable on the bike but it's there now," said Laverty, speaking to bikesportnews.com this morning from Barcelona airport.

"The engine we used at Aragon was a Monza-spec one so it was fast. We had a bit of a tailwind but it is certainly quick for a Superbike. The whole package is coming together for me now."