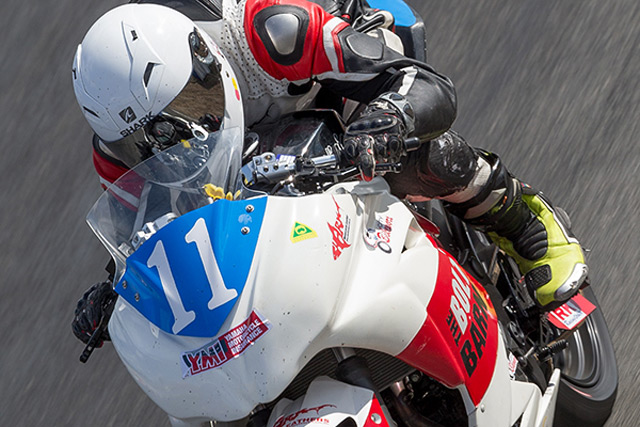 Hall got off to another great start in the opening race for the day (and second for the weekend), and held the lead through the first lap from his main rival Michelle Marais (SP Racing).

Behind them, the battle for third was intense ‰ÛÒ Lanyon, Sells, Ilish Ross (Chas Hern Racing) and Josh McHenry (Peter Stevens Motorcycles) all tightly bunched from the outset.

Through two laps Sells settled into third with Lanyon just behind him, and the pair put a fair gap onto fifth and sixth.

Hall seemed to be controlling the race, but Marais was never more than half a second behind as the Western Australian carefully considered her best opportunity to make a pass.

She got that chance towards the end of lap nine, where on the last corner she passed Hall on his inside and looked to take control of the race.

However at the hairpin on the next lap Hall got back in front ‰ÛÒ riding all the way through to the chequered flag and claiming the win, to make it two-from two heading into the final race.

Sells and Lanyon had an epic battle for third place, but by the time the 12 laps were done, it was Lanyon with his nose in front to claim the final podium position.

Sells finished in fourth with Ross pipping McHenry for fifth.

Hall came off third spot of the grid in race two and whizzed past Marais and Lanyon into the race lead.

Sells moved into fourth and set himself to battle for third position as Hall and Marais looked to breakaway at the front in a repeat of race two.

The pair didn‰Ûªt have it their own way as Sells and Lanyon moved up to them, before Lanyon made an incredible pass into the lead on lap five.

At the same time Sells moved into third spot relegating Marais to fourth, and at the halfway point Sells claimed second spot.

On lap eight and with things still extremely tight, Marais broke hard on the front of turn one which sent her crashing down ‰ÛÒ forcing her out of the race and ending her day prematurely.

Marais walked away from the crash, but her title hopes in the class took a major beating ‰ÛÒ the red flag coming out shortly after with the race declared to be run in two parts.

When the four-lap second part commenced it was Hall moving off the line into the lead from Lanyon and Sells.

That is how the top-three stayed over the course of the four lap re-start, handing Hall the combined race win and making it three wins from three for the weekend.

Lanyon claimed second place in the race to take second overall for the round, with Sells finishing with a third place race and overall round finish.

In the overall Championship standings, Hall now holds a 30-point lead from Marais heading into the final round at Phillip Island.

In the Women‰Ûªs category, Ilish Ross was the only rider to finish all three races giving her round honours and leaving her just 15 points behimd Michelle Marais heading into the final round.

In the 250cc class Brian Bezzina won the round but remains 50 points behind Western Australian Lachie Keogh in the championship.