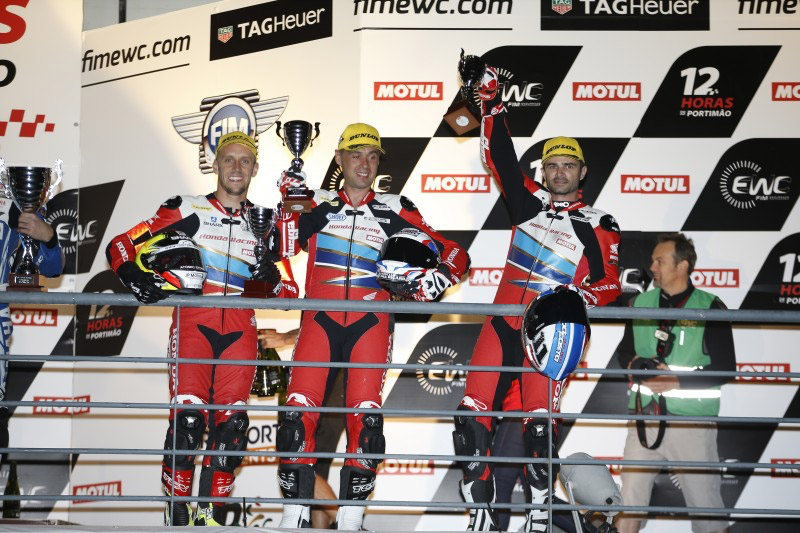 The Honda Endurance Racing team has claimed a third-place finish at the end of a spectacular Endurance World Championship race at PortimÌ£o‰Ûªs Autodromo do Algarve in Portugal.

Freddy Foray, SÌ©bastien Gimbert and Julien Da Costa managed to complete a total of 389 laps of the Portuguese circuit over the twelve hours of the race, before making their way onto the podium for the first time this year.

Freddy Foray had a great start to the race and was fourth at turn one, before eventually dropping back again. He then handed the Honda CBR1000RR SP over to SÌ©bastien Gimbert before it was Julien Da Costa‰Ûªs time to hit the track to end the first rotation of rider stints.

The team was able to make up several places during the first six hours and, as the encounter reached its halfway point, the great effort by all three riders helped in consolidating fifth place. The team then was promoted to fourth in the following hour after a technical problem experienced by fellow Honda team F.C.C. TSR: the Japanese squad eventually finished with a credible 12th, after re-joining the race in 21st place.

With the help of the efficiency provided by Motul fuel and the way the bike made its Dunlop tyres last, all three riders were able to stay longer out on track than most of their rivals, and to keep a consistently quick pace for the whole duration of the encounter.

As the race reached its 8-hour mark, seven points were awarded to the Honda squad for running in fourth place. Then in the middle of the tenth hour, the team was able to make up another spot. From then on, Foray, Gimbert and Da Costa brilliantly managed their margin to claim a well deserved podium finish, which completed a really strong comeback after the difficulties encountered on track during the previous days.

"This is an awesome result for us." Team rider Freddy Foray said. "After yesterday‰Ûªs qualifying we were not expecting such a comeback, but we fought hard and believed in our chances for a good finish.

"The team has done a fantastic job and that‰Ûªs a great boost for all of us to do even better for the next race. We know we still have some work to do in order to bridge the gap to the front-runners to fight for a win. But for now, we will take this podium with both hands and look forward to Suzuka.

The third and penultimate event of the season, the iconic Suzuka 8 Hours, is scheduled to take place on July 28‰ÛÒ31.