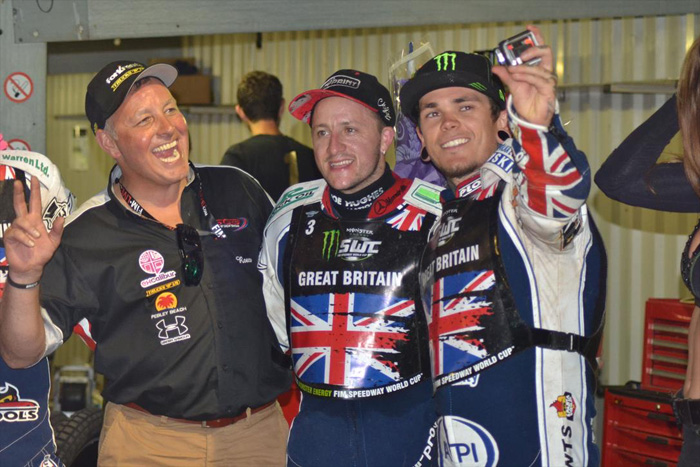 Team Great Britain boss Alun Rossiter admits he has one eye on the future after naming his 2015 Monster Energy FIM Speedway World Cup squad ahead of Event 2 at King‰Ûªs Lynn on June 8.

The Lions, led by 2013 world champion Tai Woffinden and his FIM Speedway Grand Prix rival Chris Harris, bid to roar their way into the Monster Energy SWC Final for a second straight season when they take on Australia, the USA and Latvia at the Adrian Flux Arena.

Only the winners advance to the title decider at Danish track Vojens on June 13, but Rosco is backing his young Brits to deliver against a tough field, likely to feature world champion and USA hero Greg Hancock, plus Aussie SGP stars Chris Holder, Troy Batchelor and Jason Doyle.

Woffy and Bomber are joined in the squad by King‰Ûªs Lynn‰Ûªs 17-year-old sensation Robert Lambert, who could make his senior Team GB debut on home shale. His Stars team mate Lewis Kerr is also in the running.

Danny King and Craig Cook are vying for places after flying the British flag in recent years, while Kyle Howarth, Richie Worrall, Richard Lawson and Kyle Newman are all contention for debuts.

Rosco can only choose four for King‰Ûªs Lynn, and is delighted with the desire shown by his terrific 10. But he admits the Lions have a tough act to follow after their heroic win over Australia, the Americans and Italy at King‰Ûªs Lynn last summer.

‰ÛÏFor me, qualifying for the final outright in my first year in the job was fantastic." Rossiter said. "But I guess that puts a bit of added pressure on me to repeat that success. I do believe we can and I believe in the riders.

‰ÛÏI‰Ûªve given these guys the chance on their performances from last year and what they‰Ûªre doing this year. Obviously I‰Ûªll be keeping a check on riders before I make my decision.

‰ÛÏI‰Ûªm sure people will be pleased Robert Lambert is included in it. He has certainly given me a lot of food for thought.

‰ÛÏWe have to start looking at the next lot of riders coming through. These guys are keen and they want to be there. When I spoke to them, they were all very hungry and pleased to be picked.‰Û