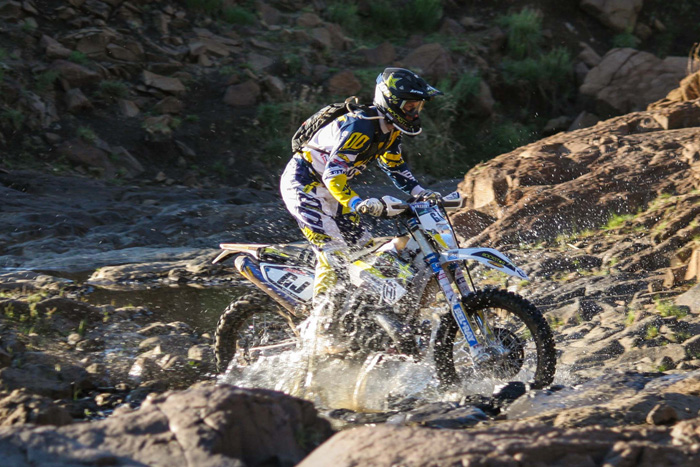 Bringing his 2015 Extreme Enduro season to a victorious close Rockstar Energy Husqvarna Factory Racing‰Ûªs Graham Jarvis has won the Roof of Africa, ending the three-day event ahead of Wade Young and Brett Swanepoel.

Making a conservative start to the race held in the Mountain Kingdom of Lesotho, Jarvis placed sixth at the end of the opening day‰Ûªs competition ‰ÛÒ the Round The Houses time trial. Knowing that two long, tough days of competition lay ahead Jarvis was very much making a tactical bid for overall victory.

Day two was all about putting himself in a strong position in readiness for the third and final day‰Ûªs competition. Placing second on the day to move up to fourth overall, Jarvis caught up with day one winner Wade Young yet pushed no harder than he needed to.

As expected the third and final day proved decisive. Starting one-minute behind then race leader Wade Young, Graham took his time to reel in those ahead of him before striking as the event reached its hardest sections. Moving firstly into the race lead Jarvis steadily extended his advantage, opening up a 20-minute lead as the day neared its close.

In biding his time during the first two days of competition Jarvis once again showed his superiority during the final day of racing, earning a well-deserved 2015 Roof of Africa victory.

‰ÛÏIt feels great to get the win at the Roof of Africa." Jarvis commented. "It‰Ûªs an incredible event, and this year was as tough as ever.

" I‰Ûªve learned lot over the years and I know I‰Ûªm not as quick as the younger riders on the faster sections, so this year it was all about taking my time and waiting for the more technical sections.

"The first two days were really about putting myself in the right position for the final day. At the start of the final day I decided to stay behind the guys ahead of me at first. I let them do some of the navigating, and saved some energy.

"Last year I ran out of energy, so I didn't want to make that mistake again. Once we arrived at the difficult hill climbs I gave it everything I had. I knew that was where I could make up time, and things went to plan.

"The Roof of Africa certainly doesn't get any easier, but to end 2015 with a win here is a great way to finish off the season.‰Û